Today's vendor in our rundown of the Big 5's product lines is VMware. Previously I've written about Citrix, Symantec, and Quest, which leaves just Microsoft after today.

Today's vendor in our rundown of the Big 5's product lines is VMware.  Previously I've written about Citrix, Symantec, and Quest, which leaves just Microsoft after today.  First, we'll take a look at VMware's products that fit into the desktop virtualization space, and then we'll have a look at the chart showing the lineage of each of those products.  Writing about VMware's products is a slippery slope, because if you're not careful, you can find yourself writing about vCloud and a lot of other, smaller products.  They have products that range from the entire data center to the end user, and that makes writing about a specific initiative a little more difficult. For the purposes of this article, we're going to try to stick to desktop virtualization and related products, but if you feel something belongs in this rundown, let me know and I'll add it.

Externally, VMware shows three different groups that we're interested in: Datacenter Platform, Desktop Products, and Mac Products.  They also have a Management Products group which contains products that contains a few other products that work in all aspects of virtualization, like vCenter Server. Let's take a look at each of the groups and products within them to get a high level understanding of what's out there.

The DataCenter Platform group consists of VMware vSphere 4, VMware Server, and VMware ESXi/ESX.  While, generally speaking, we care more about connecting the user to the desktops than where the desktops are, this group is important enough to at least take a look at.

The Desktop Products group consists of VMware View 4, VMware ThinApp, VMware ACE, VMware Workstation, and VMware Player. While each of those is clearly a form of desktop virtualization, when we think about VDI, we're really only thinking about VMware View 4 and VMware ThinApp.  There are, however, some uses for the other products, like layering or VM portability (offline VDI), so we'll take a look at them all.

There's only one Mac product, and I'm mentioning it more because I'm a Mac guy than anything else - VMware Fusion.  Like VMware Workstation, it's a Type-2 hypervisor, but it runs on Mac OS X. The most useful feature is Unity, which allows you to run your Windows apps seamlessly in your Mac desktop, hiding the Windows desktop altogether.

This chart was pretty easy to make. With a couple of acquisitions and a lot of in house development, VMware has become an important player in desktop virtualization. Without much explaining to do, here's the chart: 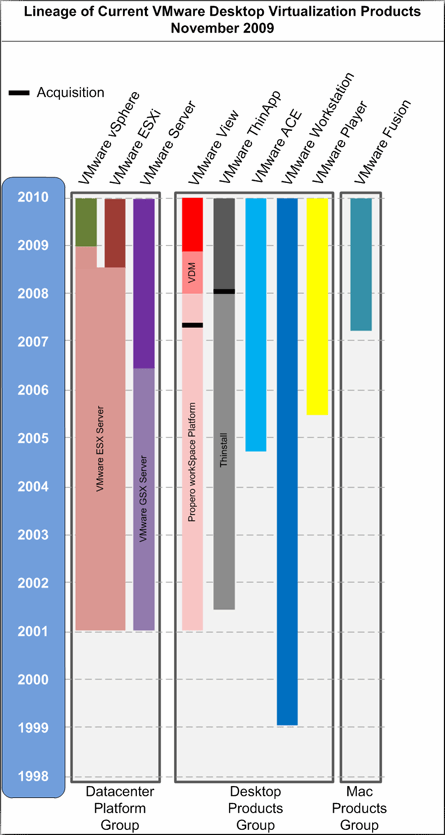 As usual, please let me know if I've missed something. We'll round out the Big 5 product lines next week (hopefully) with Microsoft.

vSphere is really part of the ESX lineage.  It's ESX 4, but that didn't sound cool enough ;)  Of course it's more than that, but it really is an evolution of ESX, not a separate product.

Another minor quibble, the pigeon-holing of ESXi as the "Free" product is also incorrect. ESXi is available in a free version, but has all the same features as the ESX "Classic" product. The different being ESXi has a smaller, disk, memory, and hence security footprint.

When one is deploying vSphere (as Shawn Bass pointed out correctly in the post before mine), you can choose to deploy your VMs on ESX or ESXi equally.

Not a lot of acquisition compare to others... normal (as everything it around the hypervisor), advantage (mastering their technolgoy) or threat (lake of "new blood")...

Gabe, the VMware View and VDM product line was born from the acquisition of Propero. In fact you blogged about it here www.brianmadden.com/.../vmware-acquires-propero.aspx

Propero's Workspace product had been in development since 2000. Version 5.0 of their product was released in 2005 (www.itworld.com/051024propero).

@Mattc HOLY COW!  How did I miss that?  Updating now.

Geez...thanks for pointing that out.

Good catch MattC, i was just about to add that.

Another important note is that VDM was part of the VDI name suite which changed to View.