Last week, I wrote a rundown of Citrix's product line as of 2009, which was the third in a series of articles stretching back to 2007. I decided it was worth doing the same for the rest of the "Big 5", which consists of Citrix, Symantec, Quest, VMware, and Microsoft, in no particular order.

Last week, I wrote a rundown of Citrix's product line as of 2009, which was the third in a series of articles stretching back to 2007.  I decided it was worth doing the same for the rest of the "Big 5", which consists of Citrix, Symantec, Quest, VMware, and Microsoft, in no particular order.

Holy smokes, talk about information overload! There's so many product groups at Symantec it can make you dizzy. The one that we care about today, however, is the Endpoint Virtualization group, which was created in early 2009. The Endpoint Virtualization group is comprised of many products, each of them licensed or acquired by Symantec over the years.

Symantec Workspace Profiles is an OEM'd version of RTO's Virtual Profiles.  You can read more about the OEM relationship here, and you can see the RTO version in action on BMTV Episode 16.  The RTO Virtual Profiles is such a solid product that it's also being OEM'd by VMware, but is not yet available as part of VMware View.

Symantec Workspace Virtualization is built on the client provisioning and isolation technology they acquired from Altiris in 2007.  The Altiris SVS product has been around for some time, and enabled application virtualization on the client side. What it lacked, however, was streaming capabilities.  So, after finishing the Altiris acquisition, Symantec formed a strong partnership with AppStream, whose sole purpose was to stream applications.  I think AppStream/Altiris even shared a booth at BriForum.

This chart, while much smaller than Citrix's chart, presented a challenge in tracking down the past iterations of the products. Perhaps the most interesting thing I learned, though, is that AppStream has been around since 1999!  That means that they even beat SoftwareWow (predecessors of Softricity SoftGrid, which is now App-V), at least in terms of Archive.org web presence (visit the WayBack Machine: SoftwareWow, AppStream).  One thing we can tell for sure is that even though none of the products in the Endpoint Virtualization Suite are home-grown, Symantec built the solution by acquiring companies with established products and good reputations. 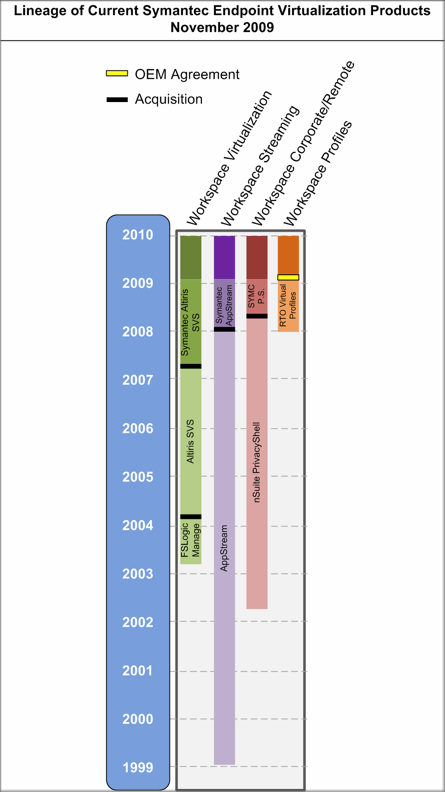 The problem with a rundown like this is that I'm pretty sure I'm leaving off stuff that Symantec would feel also belongs in the conversation.  It's hard to find those things, though, because A) the solution is very young, and B) there is a LOT of stuff that Symantec does.  So, if there are other technologies from Symantec that should be in here, let me know in the comments.

I think you have captions for columns little bit mixed up :-)

Btw, for Softricity vs. AppStream; Softricity twas first known as SoftwareWOW, so that website name returns some earlier hits: http://web.archive.org/web/*/http://www.softwarewow.com

Oh RIGHT!  I knew there was an earlier name, I just couldn't remember it for the life of me.  I'll update.

If you're referring to where I say "Symantec Altiris SVS" and so on in the bars, that's on purpose, because the product wasn't renamed after acquisition, save for adding Symantec to the front (at least as far as I can tell - that was one of the tough parts).

With captions I was referring to the fact that the chart e.g. says Workspace Corporate/Remote but actual colums shows SVS products (not nSuite ones). Same mixup for all others in the chart besides Workspace Profiles.

btw, am I the only one that continuously tries to read word Workspace in the names as vWorkspace? ;-)

And yeah, I do that vWorkspace thing all the time.