This podcast is part of the series of interviews that I recorded when I visited Citrix's Ft. Lauderdale headquarters last month.

This podcast is part of the series of interviews that I recorded when I visited Citrix's Ft. Lauderdale headquarters last month. 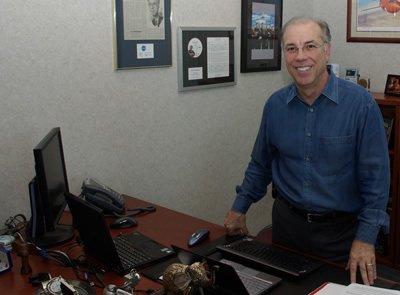 Mark at his desk. Note the three keyboards.

In this conversation, Mark discussed how Citrix as a company is coming out of adolescence and how their relationship with the industry is changing. This included information about how applications have changed over the past 17 years (since Citrix was founded), how users and applications are growing further apart, and how Citrix hopes to fill that gap.

Mark also discussed the nature of Citrix's evolving relationship with Microsoft, and how their competitive landscape is growing to include networking, systems management, and security companies.

We discussed some of Citrix's future projects, including Project Trinity, Project Kent, and the Evergreen branch office solution that Citrix is delivering with Microsoft.

I asked Mark about Mac support at Citrix, and I got a great answer.

Finally, it has been long rumored that Mark himself is a big geek. We put that notion to rest in this interview. Hint: He has more servers in his house than we have in our entire company. Hint #2: After the interview was over, we were talking about traveling around the world, and he said, "Check this out! Isn't it cool?" He then produced the following business card that was given to him in Japan: 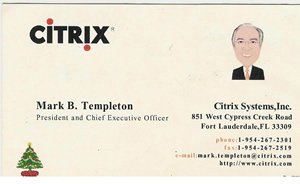 He said that the trend there now is to include a little caricature on your card as a sort of "gift" to the person you're giving the card to. Also, their cards are seasonal, which explains the Christmas tree in the lower corner. There is a tiny date on the bottom of the card that says "Dec. 2006." I kind of want to meet him once a month now to collect all twelve.

Brian Madden - 9 Jan 2007 4:29 PM
I was IMing with Doug Brown last night (about 2:30am, which is typically around the time that the two of us talk), and he turned me on to this little app called the [link=http:
So, my question is, do you notice a difference in the volume level of this show? Is it better? Is it worse? Or if I didn't mention anything, would you ever have even noticed?

Would it be possible to put up transcripts of the podcasts for those of us without headphones/soundcards/hearing? :-)

Brian Madden - 12 Jan 2007 1:16 AM
Funny you should mention that Mike, because we're just getting ready to test this!

We found a company that transcribes podcasts for a very reasonable rate. We just filled out the paperwork with them a few days ago, and later today I will FTP a sample podcast to them. We'll publish the transcript next week (or whenever it's done) and see how it's received. If people like it then we'll start transcribing all of the shows.