I hate printing.  Sadly, it's one of those necessary evils like backups, patch Tuesday, and renewing your driver's license (where I've actually helped fix a printer...sigh).

That said, among the many changes in XenApp 5, Citrix has added some printing enhancements.  In addition to the normal, EMF-based Universal Printer Driver (UPD) and the ubiquitous PCL drivers that we've come to know over the different names and versions, Citrix has included a new feature named the Citrix Universal XPS Printer Driver. 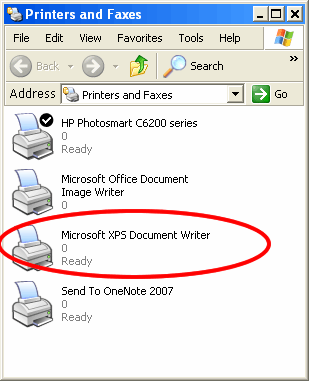 If successful, you should see the Citrix XPS Universal Printer driver in the print server properties (In the Printers folder, go to File | Server Properties). 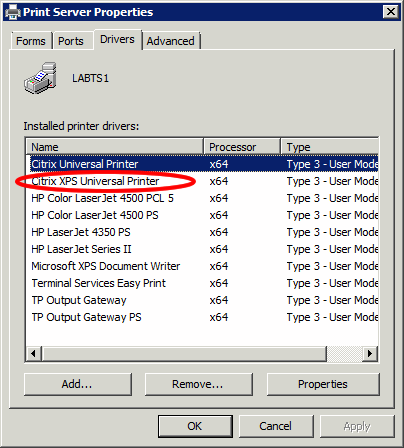 One thing to keep in mind, however, is that the default setting for XenApp servers is to use the EMF-based universal printer introduced with Presentation Server 4.0.  To configure your servers to attempt to use the XPS driver first, you'll need to edit the registry.

What you've done is modified the priority of the universal printer drivers on the server.  Each time a new session starts, the server will check to see if the client has A) a policy enforcing a universal print driver, and B) capabilities to support each of the methods in the registry key, in order.  If a client does not have the ability to support XPS printing, then negotiations will move on to EMF printing, and down through the line until something compatible is found.

How does it work?

Another day, another new feature.  Thing is - this is more of an extension of a feature that Microsoft has added, but I'm glad that Citrix is taking advantage of it so soon.  If you're using it and care to share your comments, please leave them below.

How do you install "Citrix XPS Universal Printer" on Server 2003?  I've tried using CitrixUpd.inf from \XenApp Server\w2k8\Program Files\Citrix\Drivers but only driver available is "Citrix Universal Printer".  .Net 3.5 is installed and there is a "Microsoft XPS Document Writer" printer available.  Any ideas?

My lab is all 2008 at the moment, so I wasn't able to test the 2003 installation stuff.  It is referenced in the XenApp admin guide, though.  I'll lab it up in the next day or two and get back to you.

XPS printing is a 2008 only feature IIRC. It might be possible to hack it on 2003, but it would not be supported.

This is an interesting article, thanks for that. But you are not mentioning any limits of this feature or benefit either. Have you or anyone else figured out any issues that have to be named? Are there any kinds of prints that will not work with XPS printing?

Perhaps Gabe tried this with one of the early releases like the Project Delaware tech preview release.  I remember we had to make a change kind of late in the relase cycle that removed the pre-vista support from the INF in order to get through MSFT certifcation.

We designed the driver to work on both platforms with .Net 3.0 SP1 or higher... but as Rich pointed out in an earlier post, the driver may work for you but is not offcially supported or fully tested on 2k3 platform (yet).

The main benefit to XPS is the smaller print job size compared to EMF.  This will be most noticeable for customers trying to print over bandwidth contrained WAN connections.

XPS also opens up some other options for us in the future regarding more agressive optimizations and a few other goodies.

I tried to install the drivers but when using CitrixUpd.inf, thay ask me to use a driver for x64.

So I can't use Citrix XPS for now.

If there is any tip to use it, please let me try ^^