I've been talking to anyone who'll listen about how I think "Cloud" is ridiculously over-hyped, and I even worked it into my article last week.  Today, I want to talk about why I think "Cloud" is the biggest buzz word since "Virtualization," and possibly more meaningless.

"Cloud" is too relative

Wikipedia has a great image of Cloud Computing, one that almost begins to illustrate the complexity and relativity of the cloud concept: 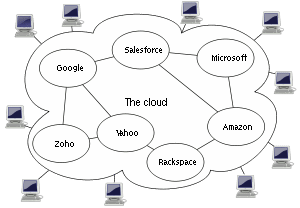 The problem is that the picture only shows "The Cloud" from one perspective. If you were to ask a regular person to identify where "The Cloud" starts, you'd probably hear "the internet" or "my company's computers" (if you were lucky enough to avoid that person looking up at the sky).  That's certainly what VMware and Cisco are shooting for, with their Cloud OS's and Cloud Computing Strategy.  Hell, IBM has a TV commercial about cloud computing now that airs during football games. To an end user, "The Cloud" starts wherever the coaxial cable on the other end his cable modem ends.

Now ask a person who works in his company's IT department. That person won't consider their environment to be "The Cloud."  After all, it's sitting right in front of them. To an IT person, the cloud is outside of their reach, too. Even if their environment is built on a Cloud OS or some other sort of seasonal, migratory buzzword, it's only a "cloud" because it can be moved outside of the organization and into..."The Cloud."

"The Cloud" is real, but "clouds" are not

This is what I really like to hammer home in these discussions - there is a big difference between "cloud" (lowercase), and "The Cloud" (capitalized).

Look at the image above, and you'll see examples of various web apps and services that are often times referred to as "clouds": Amazon, Google, Zoho, SalesForce, etc...  These various clouds were, for the most part, around before the word "cloud" became popular. They were just called web apps then, and only the most useful ones were adopted by corporations (like SalesForce).  In the image, we can also see that each of these "clouds" are themselves part of a cloud, which is typically called "The Cloud".

This is the heart of all the buzzing.  Until now, what we've been talking about is Public Clouds--ones that you as the IT guru can access just as easily as your mom or grandmother.  That's great, but why leave a perfectly good buzzword to the public masses when you can bring it into the business?  Enter the Private Cloud.  I can just hear the sales pitch: "Now you, too can own your very own Cloud!"

Breaking this down is very simple:

What is the definition of a cloud? Essentially, it's a collection of applications and services that use a pool of centralized resources that is not managed by the end user.

What is your IT environment? (cut and paste warning) Essentially, it's a collection of applications and services that use a pool of centralized resources that is not managed by the end user.

I bet you didn't realize it, but all these years you were on the bleeding edge of IT. You've been using a cloud, albeit a private one, for the better part of a decade or two (or three, or four, if you consider that Scott Herold Steve Herrod said "Mainframe = Cloud" in a presentation at VMworld).

My point here is that we're dressing up our dog and calling it people. For the most part, it's the same stuff that we've been working with for the last 5-7 years.  At VMworld, there was easily a dozen exhibitors that had cloud solutions that, last year, probably had the exact same solutions labeled as "data center management" or "server resource allocation" solutions. That's when I decided the cloud concept was starting to become bigger than The Cloud. Don't get me wrong--there are some valuable concepts that are coming up as a result of all this cloud focus, but it's more about virtualization than cloudy-ness. Being able to host your entire environment (private cloud) outside of your organization is great, but it's really just an outsourced data center, at best running on some sort of grid platform.

That's my 2¢. I'm sure there's plenty of people that have an opinion, so comment away.

Gabe - you are spot on regarding hype. But there definitely is some there there when you look at types and characteristics of clouds: Types: Software as a Service, Platform as a Service, Infrastructure as a Service.  Characteristics: Self provisioned, Elastic ( scale up/down ), Consumption based ( billing or chargeback ).  SaaS isn't really new at all - SalesForce, NetSuite, Citrix GoToMeeting, Logmein , Constant Contact, Taleo - lots of these out there. IaaS is pretty interesting and has great potential - who here has tried Amazon EC2 or Gogrid? With the right management tools ( e.g. Rightscale ), and enablers to move workloads back/forth ( AppZero ) - there are completely new approaches available now that weren't available before to shift work temporarily from your infrastructure  elsewhere and back while only paying for what you use. We see enterprises ( very large ones with 50k+ applications spread over 50 datacentres ) where it does make sense for them to build a private IaaS cloud, migrate workloads there to increase consolidation, even federate their private cloud with a public ( or semiprivate ) cloud in a hybrid.  This org has only 10% utilization of compute resorces today -without the elasticity, dynamic provisioning, mobility of workloads across infrastruture boundaries - i.e. without "cloud" - and new technologies/capabilities it entails - I'm not sure they could accellerate time to benefit.

Overhyped: Sure. But undeniably a new category of architecture ( at least from an infrastructure perspective ) with a lot of headroom for dramatic innovation for years to come.

You know, I went to bed last night thinking "uh oh - I didn't say that I like cloud computing," so I'm saying it now.  I do like cloud computing, and the situation you describe is definitely useful (as well as the most hype-worthy).  For them, though, it's almost an easy decision since they have a HUGE problem to address.

Hopefully, in a few years, the complexities will go away and we'll be left with a cohesive set of solutions that are built around the actual cloud concept and not the hyped up concept. FYI to those solutions makers - not everything has to have "cloud" or "-aaS" in the title :)

I would say that Cloud is to Today what VDI was 3-4 years ago. Remember the VDI hype then ( even now, still? ).  Years ago people rolled their own brokers, integrated the App Virtualizaiton du jour, User/proflie managment du jour, Imaging approach ( Ardence ), back then just RDP really ... All the pieces for "infrastructure cloud" - needed to pull all that together - don't exist yet - really - but innovation is high across many companies that are really focused on this. But for every one of those, there are probably 3 companies that have been around for a while - big and small - that did a global find and replace for "xxxx", put Cloud in there....so here we are....Not sure we are at the peak of the hype cycle yet....I expect the Trough of Dissilusionment to happen in 2nd 1/2 of 2010 ...

I think you nailed it when you say âCloudâ is too relative.  To me, the term cloud means masking the complexity of some system.  For instance, when you are drawing a network topology in Visio, you use a cloud shape to represent the Internet (thus masking the complexity of all the stuff that happens from point A to point B).  So, SaaS, IaaS, PaaS, *aaS, all fit the term cloud.  Also, to throw out another defunct buzzword, these cloud services can also be viewed as the Service in SOA.

Cloud is about building more efficient data centers driven by automation and enabled by virtualization. I don't care what Google thinks, virtualization is real.