One of the most exciting things I hope we'll see very soon is thin client devices running Android. I'm not talking about Android netbooks or tablets, rather, I'm interested in an honest-to-goodness legitimate desktop thin client that runs Android: 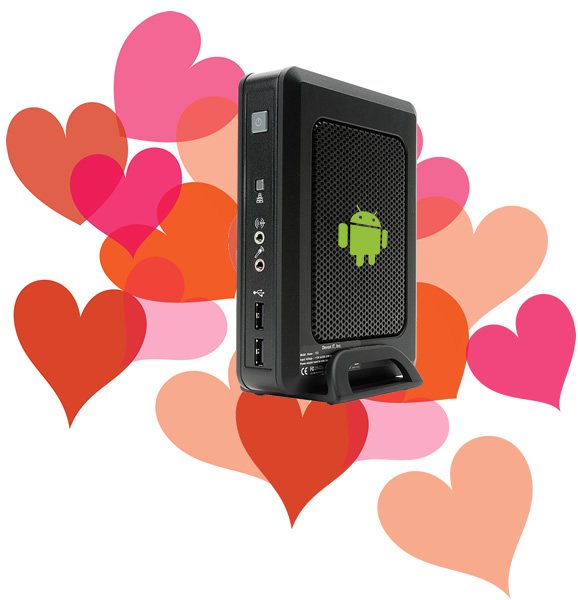 My initial thought is that Android could replace the custom Linux-based thin client OS that every thin client vendor has. (ThinOS/Blazer for Wyse, ThinPro for HP, etc.) This would be cool for many reasons.

The main reason I like it is because Android is a feature-filled OS that has tons of really great native apps. We already have all the important remoting clients like Citrix Receiver for Android, Wyse PocketCloud for Android, Quest vWorkspace Connector for Android (still in beta), etc. Now imagine if you could have that plus any of the other great native Android apps that could run directly on your device? This would be a great thin client for our slow (but hopeful!) march away from traditional Windows apps in the enterprise.

So if you wanted to use the thin client for "just" a thin client, fine, you can still do that with Android. But if you'd like to use a local browser or a few local apps here and there, you have hundreds of thousands to choose from in the Android Marketplace. And the local browser / local app experience would be light years ahead of what any single thin client vendor could do with their own custom Linux builds.

This would also be great because you could use the same OS and same management structure for all your thin clients, regardless of the vendor, and thin clients could become commodities again (which is where they belong).

Of course the big "catch" here is that today's official Android builds are all for ARM processors (except for a few community projects to port it to x86). That said, there are a few thin clients out there running on ARM processors, and now that Microsoft has announced that Windows 8 will also run on ARM, we'll probably see even more thin clients based on that architecture. There's also talk of official x86 builds of Android from Google (and Intel, of course), although it's unclear how native Android apps would work there since they're all compiled for ARM right now.

So to summarize all the reasons that an Android thin client would be awesome:

Of course there are a few potential downsides and unresolved questions around an Android thin client.

First is something that Citrix Desktop CTO Harry Labana has talked about, which is that the Android market could potentially fracture, and creating Android for x86 and for device with big screens and mice is very different than Android on a tiny ARM phone. So yeah at first it seems awesome that you could just "use all your native Android apps" on your Android thin client, but I wonder how practical that will be in reality?

It's also unclear how important an Android-based thin client would be if all of our apps truly do evolve into standards-compliant HTML5/Java/whatever apps. I mean if that happens, then who cares if the client is Android or not? Might as well just keep Android on the phone and use the Chromium OS for the thin clients.

By the way, it would also be cool if we saw an Apple iOS-based thin client that could run my iPad & iPhone apps today. I guess we're already pretty close to that now that the iOS can power an external display and use a bluetooth keyboard. Too bad there's no mouse support. Actually now that AppleTV runs iOS now, maybe hacking that would make it the ultimate thin client? (And it's only 99 bucks!)

As a final note, I'm sure someone's going to mention something about the Motorola Atrix or some other Nirvana-type device, but with an Android thin client, you wouldn't need it. You could access all the same apps and data from your thin client and keep your phone in your pocket.

So what do you think? Android thin client... yes or no?

This is an interesting idea. Playing with the Motorola ATRIX as a thin client I have to agree that this has some real potential. But why do we need dedicated thin client devices in the future, can't this simply be an Android based "Nirvana Phone". No separate devices, just cradle your phone when you are ready to work.

The Chromium OS option is also interested, Citrix has the HTML 5 based ICA client which opens up interesting possibilities...

I agree. The next gen thin clients are going mobile.

I would much rather take an existing PC and throw on NxTop so I can connect to a SHVD rather than invest in thin clients.

Putting Android on x86 platforms is just an OS replacement and does not address device management.

I think one of the main problem is running the apps locally will be supporting high screen resolution for local monitors. developer.android.com/.../screens_support.html

The user experience will be much degraded using android apps locally on large screen. Even Motorola Atrix has that problem. The same problem Ipad had when going to the big screen.

A long time ago (Sept 2008) I wrote an article (dtmilano.blogspot.com/.../android-thin-client.html) which precisely describes this possibility and also includes a "crude" video preview of an RDP session.

One of the most important limitations of using Android on "real" thin client is network booting because nowadays transferring an Android boot image (+1GB) could take quite some time. But this surely can be circumvented caching the image and propagating only the updates.

Also, in the article it was mentioned that "it's unclear how native Android apps would work there since they're all compiled for ARM right now" and it's worth to mention that a huge percentage of markets apps (if not almost all) are compiled as dalvik bytecode so they will be platform independent.

>The main reason I like it is because Android is a >feature-filled OS that has tons of really great native >apps.

Huh? Linux *isn't* a featured filled OS with tons of really great apps?! HP Thinpro (Linux) powered thins for example run Debian package manager. There are thousands if not tens of thousands of these packages available. Android doesn't have an advantage here except maybe an easier to use store to get the apps. I think there are some appealing use cases where you can dock a Android (or iOS) mobile into having a bigger display, keyboard and mouse but it won't make me toss my Linux thins out anytime soon.

Interesting idea Brian. I had some similar thoughts last year when the Apple TV 2 was coming out. Unfortunately Apple didn't open it up to run apps ... yet...

Steve makes a great point as well. If a NirvanaPhone like the ATRIX can perform the equivalent of a Thin Client, then why not use that ?

Great idea Brian. Android/Chrome OS is the opportunity we have in the stagnated desktop OS landscape dominated/monopolized by Windows. I have been saying this for a long time - for VDI to take off and provide the real benefits from desktop virtualization we need innovation in this space, Microsoft is not going to provide it as innovation goes against their philosophy. Google has the muscle and brains that can make Android a viable alternative. Of course, providing Microsoft is not going to first sue the life  out of thin client developers who start making Android devices.

I donât care about the OS on the ThinClients. As long as there is no central management, every solution is not even half as cool as it could be.

So, which vendor will introduce the first management suite for Andorid based ThinClients?

Matter of time. In the automated unattended world (check-ins/etc) the cost component of CPU ($135) + margin is major component.  In the POS/etc world all we are waiting on is device framework for integrating card readers/etc. Transactions drive ROI and acceptance in commercial arena (which is increasingly being driver now instead by consumer arena).

I'm not sure thin clients ever become "personal" consumer devices. I can certainly see Android as yet another great platform (advantaged by low power consumption coming from battery powered devices) for building a thin client, but I see a thin client as a corporate deployed, purpose-specific device as an alternative to deploying general-purpose PCs. So while many employees may use their own personal android devices, (tablets, laptops, etc.) to get to their corporate apps and desktops at work and at home, the thin client should continue the move toward "zero" with no personality, or persistent state. Could you do that with Android under the covers? maybe, but it might not be worth the baggage.

It's an interesting idea but one that Brian answered in the article. Thin Clients are all about security, ease of management and standardisation.

Currently Android lacks this. Coupled with a users ability to install apps onto a device (and recent Android apps containing malware), well known 'rooting' of the firmware plus a likely fracturing of Android (V3 tablets V's 2.3.x phones anyone....) you start to have to worry about your device/firmware far more than necessary in a 'thin' world.

In the long term it's likely you'll see a further commoditisation of the embedded firmware, but as we've had this pressure between Windows CE, Embedded and Linux devices for a while now, I'm not sure how this would change...

As to HTML 5 browsers/Apps, we've been hearing about this for years as well. The problem is still absolute adherence to standards or lack of. We still have IE6 for a reason....

Just to note 2X Software has as Android client in GA and ChromeOS and WebOS are already in development.