Most people use seamless windows every day without actually knowing how the technology works. This article will explain how these technical components work and how you can fix seamless windows problems by focusing on Windows 2000/2003 up through MPS 3.0. Citrix Presentation Server 4.0 will work a bit differently, and we’ll discuss that in a future article.

How does seamless windows work?

Applications with seamless windows require components on the server side as well as the client side. Modern versions of the Win32 ICA clients have the seamless components built into the core client engine (wfica32.exe). On the server side the bulk of the seamless engine resides in an executable called wfshell.exe (although it also depends in part on ctxnotify.dll and semain20.dll).

The server side and client side components communicate with each other via a virtual channel used exclusively for seamless windows data communication. This virtual channel is used for window events (sizing, location, etc.), for starting additional published applications, and so on.

The server’s seamless engine is an executable called wfshell.exe. WFShell is started in each session at logon via CmStart.exe. (CmStart is an executable that’s launched via the server’s AppSetup registry value. For more information about this value check out my previous article “Understanding the Citrix MetaFrame Logon and Logoff Process.”)

WFShell.exe is responsible for a lot of stuff, including:

The settings for the server’s WFShell seamless engine are stored in the registry hive
HKLM\SYSTEM\CurrentControlSet\Control\Citrix\wfshell
and read every time WFShell is launched. (i.e they’re read every time a new session starts.)

When establishing a connection to a seamless application, the ICA client sends information about its desktop to the server. This information includes things like client metrics, display area, color depth, etc. The server needs this information so that it can (for example) know when you move a window out of the visible range.

One of the behaviors of Citrix that a lot of people don’t know about is something called “session sharing.” What this means is that when a user starts a published application on a Citrix server to which they already have a seamless connection to another application, the second application “shares” the session of the first. (This can be tricky at times because it means that a logon script will not be run for the second application since the user is already logged in to the session that it’s sharing.)

To launch the second application, the ICA client engine sends the request to the server via the seamless windows virtual channel and the WFShell (ctxnotify) starts the application on the server within the same client session. If needed, session sharing can be disabled by setting an exception flag (more on exception flags below). You can also check out this Citrix knowledgebase article that fully explains session sharing CTX159159.

Since both seamless applications share the same ICA connection, session sharing is only possible when:

If you want to make use of session sharing, an easy way to do it is to use the copy (F8) function within the CMC to create additional published applications. This will ensure that all your applications have the same settings. (Of course particular sessions could have different settings via policies, but that’s a whole other issue.)

Using Seamless Exception Flags to alter Application behavior
Citrix had to implement a lot of “tricks” to get seamless windows to work in MetaFrame. Unfortunately not every application in the world is programmed in the same way or using the same development tools. To address this Citrix had to add support for certain non-standard window behavior of applications.

Applications that don’t perform quite right in seamless windows environments can be dealt with using the Citrix Seamless Windows exception flags that are configured in the registry of the Presentation Server. There are currently 15 global and 7 application-specific flags that can be set in whatever combination is needed to make a particular application perform via seamless windows in a way that you want. (See the PDF attached to this article for more information about settings that can be changed. This PDF is my extended version of the Citrix knowledge base article “Seamless Exception Registry Flags – CTX101644”)

Figuring out exactly which exception flag and options you need can be tricky. You typically have to figure out the window’s ClassName. Citrix article CTX103137 describes this process, although it uses a utility from Microsoft called SPY++ that you can only get with Visual Studio. You can also use a free replacement tool called WinSpector. You can find this great utility and many others in my 4GEResource Kit at http://www.citrix4ge.de/tipps/4gereskit.htm.

So just what kind of things can you change with these exception keys? Well, for example, Borland / Delphi applications might use a so called “transparent window” which will have issues with the taskbar icon. If so, try the following registry key:

Of course this is just an example, but you can change all sorts of things here. (Again, see the attached PDF for a full list.)

When ending a seamless application, the client engine sends the request to the server. WFShell terminates the applications that are running on the server and the ICA client engine closes the window(s). Unfortunately due to additional programs that have been started or issues with WFShell, a server session will sometimes remain active on the server. Even though this is not a “Citrix” problem per se, Citrix did add a special seamless exception flag (LogoffCheckSysModules) to terminate those additional programs that get “stuck” when a session attempts to unload.

If this is something that you experience in your environment then you’ll have to figure out which process prohibits the graceful session logoff from the server before you can set any registry keys. To do this, use the CMC to open the session properties of the stuck session and terminate the processes one-by-one until a graceful logoff occurs. 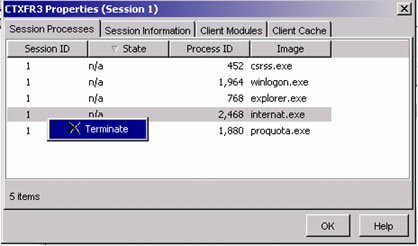 Once you figure out which process frees up the logoff (let’s say it’s “BadApp.exe”) think about whether you really need that executable. If not, then delete it or uninstall the application. If the executable is important then add the following registry key:

Note:
Enter the list of executable names with a comma and NO spaces between them,
for example: App1.exe,app2.exe,app3.exe

As companies migrate to Windows Server 2003, some admins have tried to cut corners by copying the old Windows 2000-based Citrix server’s ica-tcp registry hive (HKLM\SYSTEM\CurrentControlSet\Control\Terminal Server\WinStations\ICA-tcp) to their Windows 2003 servers.

Be aware, this procedure will break the seamless engine!

Normally the Windows 2000 ICA Winstation Driver Flag (WdFlag) has a value of 0x00000e (at least a low value). Now if the Windows 2003 ICA WdFlag has a value below 0x000048 the seamless engine will break and you will only get non-seamless sessions. Recreating the ICA listener will reset all the ica-tcp values to their defaults and solve the issue.

CCaronan - 7 Aug 2005 6:25 AM
I was hoping to find how it would be possible to disable wfica from replacing my locally configured transparency settings on my thing client seamless windows. Presently I can set the transparency of each window individually but as soon as I move any window the settings on the remote server are forced down to the client.

I am not sure if each seamless window exists on the same frame buffer on the server or if they each exist on seperate frame buffers. I can forsee problems occuring should I attempt to make two overlapping windows in a shared session have gradient transparency settings but I suppose I will cross that bridge when I come to it.

Any advice on how to disable the persistance of serverside transparency settings would be very much appreciated.

Dennis@7summitsict - 18 Feb 2006 11:44 AM
id like to know the consequences on the licensing; does disabling the session sharing has a result that there will be more licenses consumed?

We have a problem with seamless apps that have a result that reconnection only works if the first app of the session is reconnected. This is through PS3 with CSG.

Hmm.. wrong place.. well.. my description says not-so-newbie.. so still a newbie.. sorries..This was supposed to be a reaction on ;https://www.brianmadden.com/content/content.asp?id=450

Dennis@7summitsict - 18 Feb 2006 11:49 AM
id like to know the consequences on the licensing; does disabling the session sharing has a result that there will be more licenses consumed?

We have a problem with seamless apps that have a result that reconnection only works if the first app of the session is reconnected. This is through PS3 with CSG.

Michael Burke - 20 Feb 2006 12:06 AM
It shouldn't (at least in CPS 3/4)... Citrix tracks the licensing across servers, so even if the sessions are on different servers (or same server), the user should only consume one license.
[-]

CCaronan - 17 Oct 2006 1:15 AM
Thanks very much for this. I'm troubleshooting a sharing sharing issue and found little info on the Citrix site, whereas this has told me most of what I needed to know!

Was the article for Citrix Presentation Server 4.0 mentioned in the second paragraph ever written, I can't find it?  Please let me know at thamilton@choicesolutions.com thanx.

I donot need seamless,how to config to deny it?