While Brian (and maybe you) might disagree, I believe that BrianMadden.com should be more about the "enterprise desktop" and end user client computing in general. The current focus on server-based computing and desktop virtualization is too limiting. The reality today is that the vast majority of enterprise desktops are still classic PC's or laptops (as they should be). And even though a lot of people in our industry are talking about "post PC Era," it will be a very, very, long time before classic computing becomes a true "legacy" solution within the enterprise. So as a result, I wouldn't mind if BrianMadden.com also investigated and reported more on conventional desktop models and management solutions.

[Last minute edit: Be sure to check out Brian's latest article on desktop transformation: I wasn't aware of his article when I wrote this one, but it's nicely linked to the concepts I'm talking about here.]

Let me give a small example that I get excited about: Many of our customers use Microsoft System Center Configuration Manager 2007 (SCCM), andmany complain about the lack of transparency for admins and end-users in the product. As a result of this, Login Consultants recently released another free tool. This time instead of App-V, we've decided to create one for SCCM 2007.

The idea of this tool came when my colleagues Dennis Geerlings, Ryan Bijkerk and Ment van der Plas (@mentvanderplas) were migrating the desktop environment of one of our customers. This customer, like many others, has chosen SCCM 2007 as their primary deployment solution for applications (both traditionally installed as well as virtualized with App-V). While the design and implementation of the distribution environment went smoothly and the applications were tested in the new environment, my colleagues stumbled upon an very inconvenient habit of SCCM in the migration phase of the project.

Users would receive their brand new laptops from us that had most of the corporate applications already installed as part of the image. While the departmental apps were presented to the user as soon as they logged onto the machine, they required a user action to actually install. But when they clicked the button to continue with the install, most users were presented with an error that an installation was already in progress:

This is a very common error in SCCM environments and basically means that the SCCM client is busy running another program in the background.

We quickly identified this as "by design" because some software (like OS patches) had been updated in-between the time the image was created and when the user first logged on. So when the SCCM client was busy updating the system to the latest software level, it prevented other installations to take place. Although we could tell the migrated users to "try again later," that just led to confusion.

So we developed the System Center Configuration Manager Status Indicator (CSI) Windows gadget as a user-friendly interface between the SCCM client and the user. CSI displays information about application installation or uninstallation and informs the users about required reboots or logoffs. Most importantly, it tells the user when the SCCM client is not doing anything and when user-initiated installs can take place. 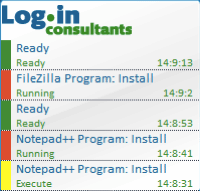 The CSI User gadget is a simple gadget that shows the status of the SCCM Client with a color. Users can hover over it to get a message with more status information. The CSI Power User gadget shows more advanced information, such as a time-stamped list of recent application installs.

And finally, the CSI Client was developed for OSes that don't support gadgets (like Windows XP), although it can be installed on higher OS versions as well. The CSI Client displays a tray icon that changes color depending on the activities SCCM Client.

You can find more information about installing and configuring this new tool in the admin guide that is included in the download (which, did I mention, is free?) You can download both x86 and x64 versions from LoginConsultants.com (registration required).

While we're on the topic of free tools for desktop application delivery, my colleagues Falko Greafe (@kirk_tn) and Matthias Wessner released a very elegant tool for analyzing App-V packages.

Sequences are not always easy to distinguish from one another and can therefore cause conflicts. (Funny that this seems like a contradiction with application virtualization, right?) So in order to get a quick overview of an existing Microsoft Application Virtualization software set, Falko and Matthias developed the App-V Analyzer.

The App-V Analyzer generates a list of all available virtual applications (including orphaned items) as well as their key App-V characteristics. The tool validates the existence of important publishing and execution properties and performs a conflict check of the most critical application and package properties, including published and unpublished applications. This way the tool helps to solve conflicts proactively and by doing so reduce pressure on support.

The App-V Analyzer is created to work in any deployment scenario, works independent from the publishing approach, and does not require specific backend software. Again, the free download can be found here (registration required).

Thanks for the tools guys!

Consider having SCI also provide info on action scheduling, as in when is the next schedule machine/user action poll, and maybe is it talking to SCCM at this time or did connectivity get screwed up.

Hi Tim, thank you for your suggestion. We have added the "action scheduling" to the feature list for the next release.