It’s hard to make printing interesting, though lately I feel like the industry has been doing some noteworthy things, even though it has been addressing the same problem for 17 years. As I wrote last week in my Citrix Summit vendor announcement round-up, ThinPrint made an announcement about their ThinPrint Hub at Citrix Summit, and this week I had a chance to catch up with them to find out more information.

To this day, deploying ThinPrint in the nether-reaches of your organization required a computer of some sort with the ThinPrint client on it to act as a print server. Some people use appliances, others use virtual machines installed on their CloudBridge, and some just use PCs. Keeping printing operational requires not just maintaining the ThinPrint client, but also maintaining the instance of Windows it’s running on and the hardware.

That’s where ThinPrint Hub comes in. Focusing on home and branch office scenarios, ThinPrint Hub was created to make it easy to deploy printing out to the fringe of the network. It’s a tiny hardware device that, though I haven’t seen it, I’m pretty sure is a Raspberry Pi 2 with a special OS on it: 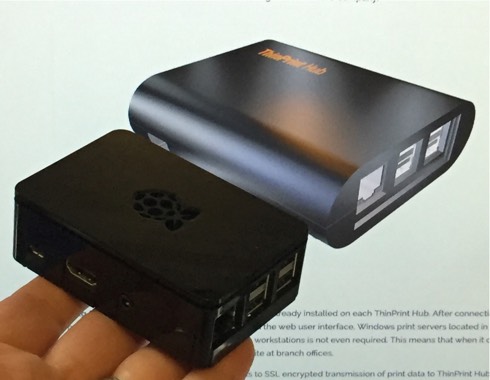 If it is based on Raspberry Pi, that’s really cool because we know they’re not going to have problems with hardware suppliers, there’s no “golden screw” that can halt production, and there is a ridiculously large support community. In other words, if it’s a Raspberry Pi, ThinPrint didn’t have to reinvent the wheel, and the hardware itself isn’t prone to any growing pains.

The device has an Ethernet jack, four USB ports, and is powered by a micro-USB connection. When you first power it on, an admin also starts up the configuration software, which finds the device on the network and allows them to give it an IP address. From there, admins can use a web interface to configure the device, creating printers (locally attached via USB or on the network), connecting it to ThinPrint Engine, and so on. After that, you can deploy it to the remote location and have someone there simply plug it in. Since it acts as the ThinPrint client, you don’t need to install client software anywhere else at that office.

You can even deploy the device to locations that aren’t on your network or connected to the VPN, while still managing printers and users using a certificate. This approach lets you to install a certificate on the device that allows the device to send and receive encrypted data from a service running on the ThinPrint Engine server in the datacenter. You’ll have to open up a port to that service at the datacenter side, but all ThinPrint Hub devices can then communicate without the need for a VPN. This is especially useful for home offices.

Once the device is plugged in at the remote location, you can manage printers the same way you’d manage any other ThinPrint printers. Plus, according to ThinPrint, there’s no limit to the number of printers you can have connected (besides the four USB printers). Well, theoretically there is, but when they tried to calculate it the number got so high they stopped counting.

ThinPrint Hub is only in the hands of select beta customers right now, but general availability is expected by the end of March. The devices will retail for $249, but price breaks can be expected. You can find out more by visiting the ThinPrint Hub site. Though it’s not too flashy, this is the kind of thing that can make desktop virtualization admins’ lives easier by removing the need to support the device itself. If ThinPrint Hub really does just sit there and work, it means we don’t have to worry about whatever device is hosting the ThinPrint Client going down, and even the worst case scenario is solved by overnighting a new box.

Interesting, same hardware setup as the intelligent docking station for Ipad, launched at Kickstarter in 2014.