Citrix Presentation 4.5 (codenamed "Ohio") will be out soon. While it has some cool new features (server health monitoring and recovery, a brand new Application Isolation Environment engine, and integration with Citrix's "Tarpon" Streaming Server), the most noticeable change you'll find is with the tools that are used to administer and configure your environment.

Here's the deal: When Citrix released MetaFrame XP in 2001, they introduced a new, centralized, Java-based management console they called the "Citrix Management Console," (or CMC). What did people think of the CMC? Well, let's just say that MetaFrame XP was popular in spite of the CMC. The problem was that the CMC just didn't "feel" like a normal Windows application. It required a certain version of Java, and it felt out of place as the rest of the industry standardized on MMC-based management consoles. (Historical note: Why did Citrix even build a Java-based management console instead of just making an MMC snap-in? Because they wanted to use that one single console to manage both MetaFrame for Windows and MetaFrame for UNIX.)

In the Windows world, the CMC limped forward through the various versions of MetaFrame XP. When Citrix released MetaFrame Presentation Server 3.0 in 2004, they also introduced an MMC-based admin console. (Hurray!) However, that console's use was limited to monitoring your farm and user sessions. (Boo!) All configuration changes still had to be done via the Java-based CMC console. (It had a new name by that point, but that didn't mask the fact that it was still weird.)

A year later, Presentation Server 4.0 was released. The MMC console had a few new features added to it, but the Java-based CMC was still used to do all Presentation Server configuration! A good rule of thumb was that tasks that did not require writing to the data store (viewing sessions, shadowing, viewing usage statistics, etc.) could be done in the MMC. But for things that wrote new configurations to the data store (publishing applications, managing drivers, configuring farm and zone options, setting policies, enabling AIE), you had to use the old Java-based CMC.

This brings us up to Presentation Server 4.5. In 4.5, Citrix is still slowly plodding down the path to move functionality out of the Java CMC and into the MMC. This is a good thing. Unfortunately, Citrix didn't quite get everything migrated to the MMC in time for the 4.5 release. This means that for 4.5, we admins get to enjoy using both tools simultaneously! On top of that, there is no rhyme or reason as to what functionality is configured via which tool.

For instance, here is a very, very rough outline of what's configured where: 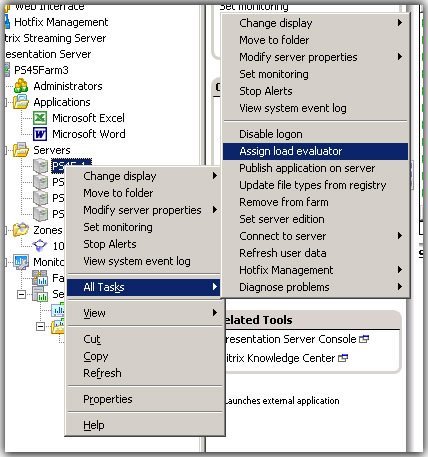 You'll repeat this fun exercise again and again in 4.5! (Think of it as "configuration menu spelunking.")

Now in the grand scheme of things, this doesn't really matter, right? I mean the load evaluators still work the same. But superficially, it's weird, and it's going to take you a while to figure out the two consoles and what you need to do where.

I guess at the end of the day, I liken this to a road construction project. Just as you have to endure lane closures, uneven pavement, and detours when a highway is being expanded from two lanes to four lanes, so too will you have ensure posted detours and construction dust as you administer Presentation Server 4.5. farms. 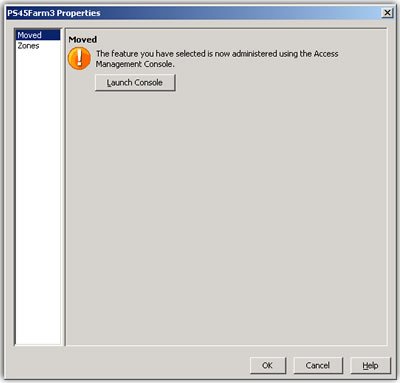 A detour sign that is posted as part of the 4.5 Java console.

Maybe the next version of Presentation Server (codenamed "Delaware") will finally see the death of the Java console?

MRivas - 15 Jan 2007 5:34 PM
During the learning phase for new customers, it will look like the product isn't finished (as you said for admin tools, it is not finished yet). Considering the  the overall message that everything is easy to do with Citrix software (and the high cost too), I believe many will not be as comprehensive as you are on this one. I didn't dislike the CMC that much but I agree it is better to use standards MMC add-ons. I just hope the switch won't last for another 2 or 3 years ...
(end of rant ;-)
[-]

MRivas - 15 Jan 2007 5:41 PM
Maybe Citrix beleives (or knows from their CRM) that they don't get a lot of new customers anymore these days so they focus a bit more on acceptable changes for oldtimers like us than the overall look & feel when you discover all those screens and menus for the first time.
[-]

DBlair1 - 16 Jan 2007 1:53 AM
Although I admit the consoles are pretty clunky at this 4.5 rev, it will pay off in the end.  Like Brian said...4 lanes will ultimately be better than 2, but we need to deal with some growing pains in the meantime.  So when you are assigning load evaluators in your farm, just think how wonderful it will be in the future to have 1 MMC snap-in that you can use to manage all Citrix components!  Hang in there folks... :)
[-]

Dennis Damen - 16 Jan 2007 5:22 AM
Euhmz... I think there might be a very good reason. Looks like the stuff that doesn't work with MFCOM is still in the old CMC. The stuff that does work has been moved to the new console :P
[-]

Jeff Pitsch - 16 Jan 2007 7:23 AM
while I agree completely it will pay off in the end, Citrix should have waited until they could move everything. It is clunky and illogical how things have moved. Brian's LE example is a classic.

Although I admit the consoles are pretty clunky at this 4.5 rev, it will pay off in the end.ÃÂ  Like Brian said...4 lanes will ultimately be better than 2, but we need to deal with some growing pains in the meantime.ÃÂ  So when you are assigning load evaluators in your farm, just think how wonderful it will be in the future to have 1 MMC snap-in that you can use to manage all Citrix components!ÃÂ  Hang in there folks... :)
[-]

This is kind of what I was wondering. At BriForum Europe, Citrix said that the MMC console would do everything via CPSCOM (the new MFCOM).. And I know that some people have complained that you can't do policies and AIE via MFCOM, so I was thinking that maybe the real reason for the delay in moving to the MMC was not because the MMC programming is too hard, but instead because it's taking a long time to get everything into CPSCOM.

markkpa1 - 16 Jan 2007 4:15 PM
If this is to be launched this way I hope Citrix does something quickly....IÃÂ´m very disappointed ÃÂ´cause in the end; How hard can it be to do all the functions at once? I am not a software programmer BUT then again I do not have a revenue in millions
[-]