Over the last few months, I’ve been thinking about a lot of different ways to explain the consumerization of IT (because I've been speaking at TechTarget's consumerization events and writing a book!) The realization that I had was that while we do live in a new era of consumerization, the hard part—which was making the transition from the pre consumerization era into our current era—is over, and life should be easier for us now.

Let me explain in more detail:

We know what consumerization is now

We've come up with a lot of ideas about what consumerization is. Here are some of the ways that Brian, Gabe, and I have talked about it:

What is the root cause of this? It’s essentially that employees now have access to consumer technologies that are way more powerful and awesome than the technology provided by corporate IT departments. This is the reality that we face today.

So the thing is, I think the hard part is over now, and dealing with consumerization is going to be easier from here on out.

Why? You might think that it's because we have new tools like MDM or MAM, or because companies are handing out iPads, or because more companies are using more cloud services, or becuase VDI means we can deliver desktops as a service, or because we're or... or... any one of the huge range of new tools and tactics that IT departments are using to embrace consumerization. And it's  true, all of these are important, they do make it much easier to deal with consumerization of IT.

However, the real reason why consumerization is easier to deal with today is that the inversion—the point in time when consumer tech surpassed corporate IT—was a one-time event, and we're past it now.

The initial consumerization chaos was a one-time event

For many years, the technology employees used at work was way more powerful than technology at home. Many people used a PC, the internet, email, and smartphones at work before they did any of these things on their own. My favorite example of this is the idea of Cyber Monday: This is the idea that employees would do their online holiday shopping the Monday after Thanksgiving when they returned to the office (having done their shopping at brick and mortars store on Black Friday) because their offices had broadband internet connections

This is the way everything was before consumerization, illustrated here in Figure 1a: 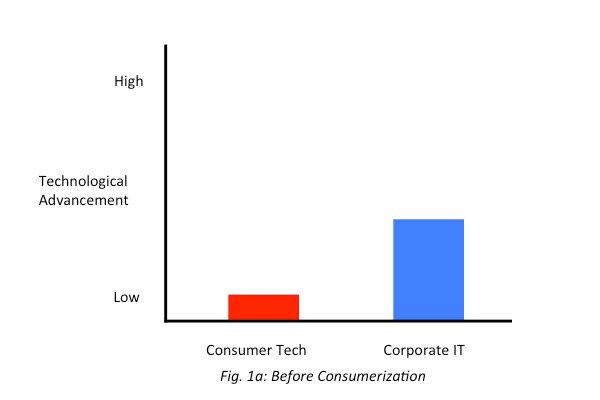 But then then consumerization of IT happened, and the relationship between consumer technology and corporate IT was inverted. This didn't happen all at once—in fact, we can point to different events over the last decade to see where this inversion happened. Some examples are Gmail in 2004, ubiquitous home broadband, the arrival of the iPhone in 2007, Dropbox, Salesforce... the list goes on and on.

All of these technologies came and completely took IT by surprise, because nothing like this had ever happened before. That's when we got all the FUIT horror stories about employees running amok, illustrated in Figure 1b: 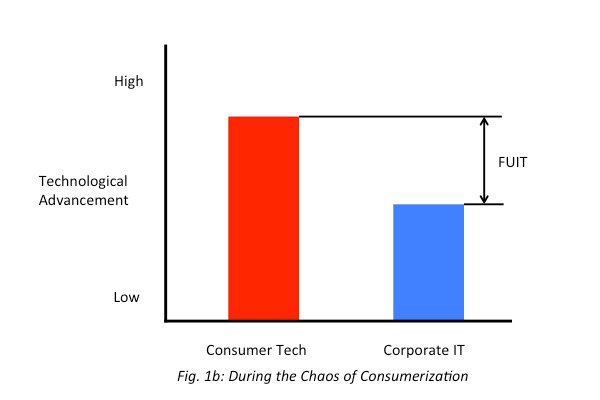 The thing is that this inversion was a one-time event. Yes, most people in IT were taken by surprise, and things might have been pretty crazy for a while, but we can be excused. Something like this had never happened before.

Sure, there will be surprises when the next hot consumer technology comes along, but however disruptive they are, we know where we stand now. That inversion will never happen again and we can breath a sigh of relief that we got through it.

We’re never going to catch up to or surpass consumer technologies (there are exceptions here—there are thousands of important things that enterprise apps do that no consumer app will ever do). And let's face it, to surpass or stay even with what the users are doing on their own would require an enormous amount of effort (and money!)

What we can do is make sure that we at least stay reasonably close to what the consumer technology is doing. This means supporting iOS and Android, implementing modern file syncing, giving users reasonable mailbox size limits, and so on... This is illustrated here in Figure 2a: 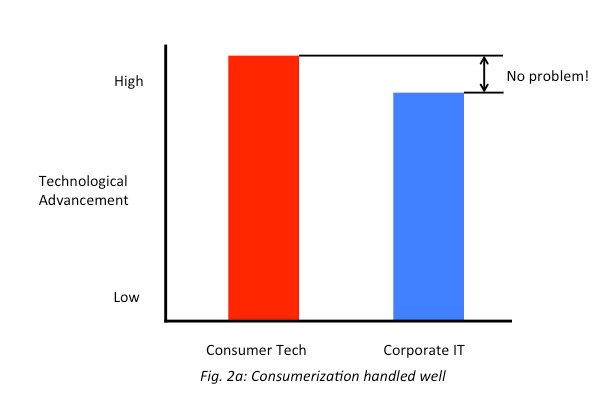 Because if ignore what's going on in the consumer world and fall too far behind, (like what happened the first time when consumerization took us by surprise) then that's when FUIT will happen again, as illustrated in Figure 2b: 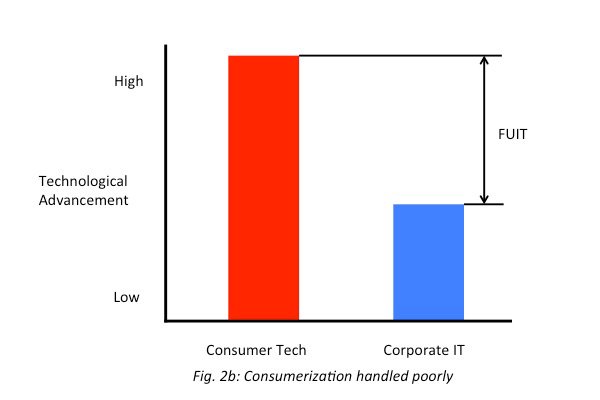 Ever since the consumer technology / corporate IT inversion, we've been living in a different world. For a while we didn't know what to make of things. Today, even though users still have the ability to say FUIT, we can rest assured because we know where we stand, and that the inversion was a one-time event that won't happen again. And so to avoid FUIT from here on out, we need simply to mind the gap between consumer technology and the technology provided by corporate IT.

You're missing diagram 1a Jack. 1b has been published twice.

I think FUIT is a lot of overblown BS when the rubber meets the road. I am in no way defending ignorant IT, and for them FUIT is a good result of their inaction.

In my reality at least, it all comes down to IT budget and justifying things to business leaders who know little about tech and often don't care with draconian views on what IT is all about. It really f'ing pisses me off when people just assume IT are full of aholes who want to do nothing. I want to close the gap and be the "no problem" kind of IT person that is mentioned above. However to do that, the cold hard reality is that consumerization costs more money. It means people have to invest in new technologies and architectures to get there. There are very real security and regulatory challenges that are in constant flux. It's also just not about IT budget, it's about the benefit that doing anything will bring. That is something that needs to be a top table business agenda item not just a f'ing IT one. IT is there to enable the business and the f'ing d bags needs to 1) learn f'ing 101 tech 2) define WTF they actually want to achieve 3) Stop f'ing treating IT like the bottom of the food chain in some arcane cast system of value. MF'ers need to realize that we work here too, we're not your bitches that take orders and say yes sir. If you're too stupid to understand technology then perhaps that's why your business is in the crapper and you've haven't figure out how to leverage technology to gain competitive advantage for your business. Technology needs to be a top table business agenda item and only then can the right level of investment be made to achieve business goals and the right employees incentives put in place to encourage responsible behavior.

FUIT is just a BS shallow argument in my view. The world is more complicated than that. It's FU User, and FU business-FUUBl. Until that happens all this talk of FUIT just means, IT will be made a more excuse for the lack of business leaders knowing how to leverage technology. The net result, is crap businesses, crap security, unhappy users and once again miserable IT, who for are also F'ing employees of the same business that are treated like $h1t!

As one that spent years living in a company where FUIT was rampant, I can't dismiss it as BS - but I will concur with @appdetective that it wasn't that I was stupid/unaware, rather I had to manage within the same IT general allocation $$$ budget during the onslaught of consumerization as I did before.

If you take (2) $500K programs to your CIO/CFO/PMO, where one is justified by closing a known security/compliance gap at the expense of user experience and the other was enabling a fancy new technology or work-style with unknown risk to the security/compliance of the business.  Which do you think will get funded ?

I'm watching a whole new FUIT trend among knowledge workers and that is collaboration taking place between people, not employees. - As an example, I know the Gmail account of as many of my peers as I do their work email address. Very handy for G-Apps/Dropbox/etc.  When *people* collaborate outside of business IT infrastructure using consumer technology, there is little a company can do to prevent it.  Only once that knowledge work yields critical information for the business can it even have a shot of being entered into an IT controlled system where the company can start "protecting" the data...

On the positive side the entire consumerization trend has introduced significantly more technology into the business that the user base actually wants to use. Understandably this introduce an entirely new challenge for IT, but also serves as an opportunity for IT to leverage this base of tooling and help users find new levels of productivity.

I disagree that the initial consumerization chaos was a recent, one-time event where consumer tech surpassed corporate IT.  We've been in that mode for some time.  If there ever was such an epoch, then it came a long time ago around the advent of the PC.  Corporate IT has always lagged behind consumer tech in adoption.

As you allude, a recent difference is that users can now outsource their tech all by themselves, where before that would have been more difficult.  Corporate IT needs to recognize that power, and become a technology provider of choice for the business they serve.