Ever since launching our podcast a few months ago, we’ve received dozens of emails from listeners asking about the technology we use to put it all together.

In this article I'll explain how it all works.

We set up a "studio" space in the office where I work. When we're recording stuff in the studio, (or for big tradeshows where we set up a booth), the central piece of equipment we use is an Edirol UA-1000 USB Audio Capture Interface. This is basically a high quality (32-bit, 96kHz) digital audio capture device that can simultaneously capture eight separate tracks into a computer via USB 2.0 which Windows sees as eight unique inputs. 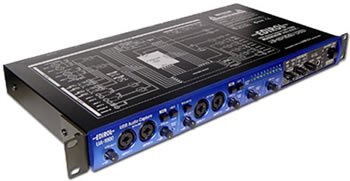 When in the studio, I wear a Beyerdynamic DT 290 headset when I conduct phone interviews or have live conversations. This is a “standard” headset that includes headphones and a microphone (like sportscasters use) so I can talk to people, monitor the recording levels, and still have two hands free. For larger group interviews I have several headsets so that we can all talk together.

If I need to record a telephone interview and add a call-in guest to our live group, we have a JK Audio Innkeeper 1 Digital Hybrid that connects the phone line to the Edirol USB interface.

One of the things I learned from these podcasts is that recording telephone interviews is kind of complex. (Actually, it’s really complex.) The problem is that we need to record just the caller’s voice to mix into the overall recording. We also need to send all audio except for the caller’s voice back out to the caller. This is a challenge because the analog phone network is purposefully designed to echo the caller’s audio back to himself, and that makes for weird feedback echoes and loops when we’re trying to record it.

In our case, we tried two telephone interface devices that did not work before settling on Innkeeper Digital Hybrid. (The first products we tried couldn’t provide enough separation between the caller’s audio coming in and the audio feed we sent down to them. That meant that we got weird feedback whenever we turned the signal up loud enough for the caller to hear us.)

So we bit the bullet and spent the money to buy this Innkeeper box. In simple terms, it has XLR (those three-pronged audio cable) inputs and outputs that go in and out of our Edirol interface, and a telephone jack to connect the phone line. Since this is a fully digital device, it digitally listens to the audio from the caller and strips out the feedback. This means that we can turn up the volume of the audio going out to the caller as loud as the caller needs and the Innkeeper will hear that audio echoing back up through the caller’s phone and digitally strip it out while letting the caller’s voice come through loud and clear. Despite the cost, the Innkeeper was well worth the price since we can now very clearly separate the caller’s voice from the audio we send down to them.

I also like to record interviews onsite at customer and vendor locations and at tradeshows. For this I use a Marantz PMD 660 Portable Solid State Recorder. (I also use this for "backup" recordings when we're in the studio using the Edirol.) This is basically a very high quality field recorder that records WAV files to a CF card. 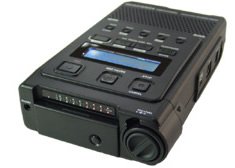 I use a Sennheiser e815S microphone with the Marantz field recorder. This is a very rugged microphone with great sound, and it doesn't require any phantom power so it's easy on the Marantz batteries. :) I usually have a foam windscreen zip-tied onto this mic to cut down on the popping sounds that some people make when they pronounce the letter "P".

When making these field recordings, I also use Bose QuietComfort 2 Noise Canceling Headphones. These let me monitor recordings from loud places to ensure that I get the voice of the person I'm recording and not background noise. (They're also great for the airplane ride to and from the conference.)

Once I have the recordings on the computer (either from the Edirol or from the CF card of the field recorder), I go to my laptop to finish the project.

The main piece of software I use is called "Multitrack Studio." This is similar to any standard recording software with a few key differences. First, it recognizes the audio inputs from the Edirol device as eight separate audio inputs. This means that I can record up to eight separate tracks, each with their own input levels, equalization, and filters. The second key feature of Multitrack Studio is that it can perform all the roles that would've required specialized hardware a few years ago. This includes graphic equalizers, dessessers, limiters, and compressors.

Once I have all the individual tracks sounding good in Multitrack Studio, I record them to a master WAV file that has all the tracks from all the participants. (This is called "mixdown.") I then import this single mixed-down track into an open source audio editing program called Audacity. Audacity is much more user-friendly than Multitrack Studio when it comes to cutting, pasting, and reordering audio segments. I use Audacity to edit out the “umms” and “uhhs” and to edit in the theme music and the opening and closing voiceovers. Once this is all done, I set the master level and export the whole project as a single MP3 file.

The final step is to open the MP3 file with MP3TAG to add the metadata. (Brian Madden Live logo, copyright information, names of participants, etc.)

That’s it! All I have to do is copy the finalized MP3 file from my laptop to the web servers and update the podcast XML file, and I’m done.

Ever Think about an Apple Laptop and Garageband?