Many of you know that Brian speaks at a lot of events each year. Combine that with BriForum and our training classes, and there is a lot of content out in the world that will be lost forever if you aren't lucky enough to be in the audience. This is something that has always bothered us. To that end, we've always tried to record as much content as we can to share via the web.

At BriForum 2005, this was as simple as setting up a video camera at the back of the room and pointing it at the presenter and the screen. This was easy to do, but unfortunately the screen content was kind of blurry due to the lowish resolution of the video, and the speaker was just this tiny little speck in the corner that you couldn't really see.

For 2006, for both the US and the European BriForum, we combined some commercial products that allowed us to record the presenters' screens directly in a video stream that was separate from the video camera in the back of the room. This meant that we ended up with two video streams--one of the presenter and one of their screen. We then combined these into single movie files that we made available to the attendees.

This technique was cool, and certainly better than what we did in 2005, but it still wasn't ideal. The resolution wasn't that great, and we had to "render" both video streams into one single video file which couldn't be changed without spending days re-rendering everything.

We kept working on a better way to do this, and in early 2007 we started testing our latest creation. We have built our own proprietary Flash-based player that we're calling the "Brian Madden Media Player." This is a flash application that lets us stream two videos side-by-side simultaneously. (In other words, we can stream the "talking head" of the presenter at the same time as the "screen" that's being projected to the audience. Because these are two independent video streams, we can encode each one with different settings allowing the most appropriate configuration for each one. (30fps for the presenter and 5fps for the screens, for example)

This Media Player is what we've been using for the DVD-based e-learning version of our 5-day advanced Citrix class since last March, and BriForum 2007 Chicago attendees have been enjoying online access to all of the BriForum breakout sessions via this video player since May. If you haven't seen it yet, check out this sample clip from our training class that explains the player. 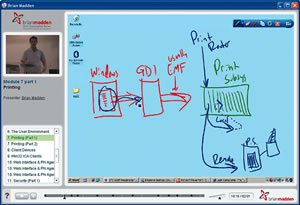 Click the image to launch the player in a new window

We also created the DVDs from BriForum 2007 using this same player. (These DVDs should be in our store any day now. They are currently in transit from the manufacturer to our warehouse.) We will begin releasing videos of the BriForum sessions for free (one per week) later this week.

Are you planning to sell this tool? This is slick!!

CCaronan - 7 Aug 2007 1:37 PM
What do you mean by "We will begin releasing videos of the BriForum sessions for free (one per week) later this week"? ....Does this mean that the the content of the DVDs from BriForum 2007 will be released for free?  would it be in a downloadable format that we could look at on laptop while on the road (i.e. when no internet connection is available)?
[-]

Brian Madden - 8 Aug 2007 7:19 PM
Yes, the content of the DVDs will be released for free over the next 75 weeks, or 18 months or whatever that is. No, they are not downloadable. (i.e. you need an Internet connection to watch the videos online.) If you want to view them offline, then you need to buy the DVDs.
[-]

Brian Madden - 13 Aug 2007 2:57 PM
This is something that we're definitely considering. Right now we have some more features to add and stuff, but hopefully someday it will be tight enough to sell or license to other companies.