Last week during the podcast we did with Raytheon, we got to talking about VMI (like VDI, but instead of desktop clients connecting to remote virtual desktops, it's mobile clients connecting to remote virtual mobile apps). The topic of "user experience of VDI" came up, with most people agreeing that the user experience of VDI on a tablet was not good.

But why is that?

It's not because of the "VDI-ness" of things. It's not because you're remoting your applications. (Heck, the entire web is really just one big remote app.) Rather, VDI sucks on tablets because VDI is about delivering Windows applications that were designed to be used from devices with big screens, keyboards, and precision pointing devices.

So if all the tablets in the world were connecting to remote iOS or Android apps, users wouldn't complain nearly as much as they do when IT makes them connect to remote Windows desktop applications.

I'd be curious to conduct an end-user survey that was two questions long:

I imagine the results would maps out something like this: 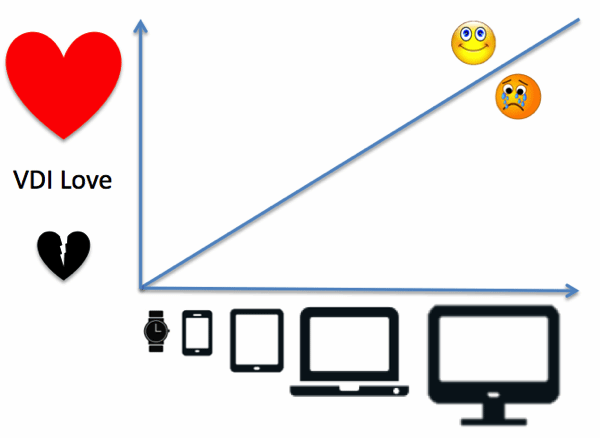 Do I love VDI? Yeah.

Do I love the form factor transformation that's forced upon users who access Windows desktop apps from tablets? No.

If the tables were turned, and VDI was only used to deliver iOS apps to desktops and laptops, people would hate it, but they wouldn't blame VDI. (They would blame having to use a phone app from a laptop.) So why do we blame VDI for the poor experience of using a desktop app from a mobile device?

I'm cool with everything you wrote except for "Heck, the entire web is really just one big remote app". That wasn't true pre-HTML5, and it's certainly true today. The web never transmitted every key stroke and mouse movement to the server for processing, and with today's Single Page Web Apps, even a page transition often doesn't require a round trip.

I've yet to listen to the Raytheon podcast but I will as I'm curious as to when removing mobile apps is preferable to just running them locally on a mobile device.

I think it is the lack of a real mouse that drives the biggest frustration in using VDI from an iPad for extensive work tasks.

This a poll I recently did on the topic.

I'm sorry Brian, but that doesn't make any sense at all. It is the same as hating all street cars because they don't drive well on rough terrain.

The blame should go to the VDI vendors, who shamelessly pushed VDI as a viable BYOD solution while it's obvious that presenting a Windows point-and-click interface on smaller touch-based devices does not provide a good user experience .

Dock2Office makes these two worlds love eachother ! Mouse and keyboard on every VDI or Remote Desktop solution, when ever and where ever you want !!

I was trying to use my XenDesktop VDI on my iPhone last night.  The XenMobile connectivity is very cool but the VDI usability is just not there.  Basic stuff like putting the cursor at the end of your text was painful.