One of the best parts of our job is getting out in front of people at live events. Throughout the year Gabe and I speak at big shows like BriForum, Synergy, and VMworld, and smaller events like user groups and TechTarget's 1-day seminars. (Speaking of TechTarget, yesterday was our 4-year anniversary here.)

If you haven't seen us live yet this year and you work for an end user customer, there are four more opportunities. (Unfortunately these events are only open to end users.)

The Consumerization of IT, from Brian Madden, at the Atlanta Marriott Century Center on Thursday December 6.

Desktop Virtualization 2012 road show, from Brian Madden. This is basically the show version of our VDI Delusion book.

The Consumerization of IT, from Brian Madden, at the Grand Hyatt SF on Tuesday, December 11.

If you do plan on attending the Minneapolis show, I highly recommend taking the Belly Buster Challenge at Grizzly's Bar & Grill. If you can eat this 3lb burger in 30 minutes, you get your photo on the wall: 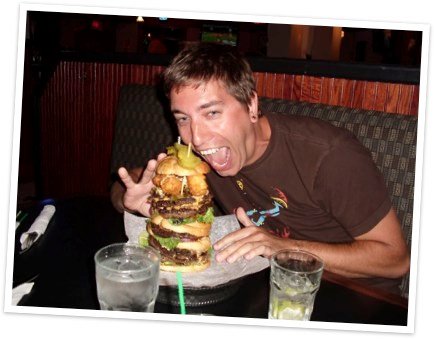 We're just now putting together our 2013 schedule. Right now it looks like we're going to do 11 Consumerization shows, 23 desktop virtualization shows, several Storage for VDI shows, a couple of BriForums, and a Modern Infrastructure conference.