The rumors are true. Industry superhero Ron Oglesby (Linked In, twitter) has confirmed (via twitter :) that he’s leaving Dell to go to desktop virtualization startup Unidesk. 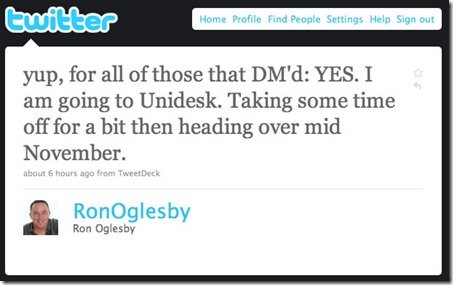 Unidesk is kind of weird because they’re making a lot of noise without actually announcing any product. I had dinner with the founders in Boston way back in April. At that time they were talking about releasing a product in October, although at VMworld they reguided that to “Q4.” In the meantime they’ve been tweeting, blogging, taking pot-shots at the competition, and talking about how awesome they are without ever talking about an actual product. Well, except this:

They also talked about some high-profile folks they’ve scored, although so far the list hasn’t really included anyone who's made a name in the desktop space. (I mean sure, that’s great that they got gazillionaire Don Bulens, one of the founders of EqualLogic, but I’m yet to be convinced that a storage guy can rock the desktop world.)

All this changes with Ron.

I’m not sure exactly what his job will be, but you can rest-assured that Ron brings instant credibility to the company in the eyes of the thousands of people who have seen him speak at BriForum, VMworld, iForum or read any of his three books. (One on Terminal Server and two on VMware ESX.)

So congrats to Unidesk for scoring Ron. So, um, can you tell us what the hell you’re doing now? :)

LOL Exactly was I was thinking.

I would hope they have an awesome product as judging by the YouTube post they don't have a marketing department. Not necessarily a bad thing.

Q: How will Dell replace Ron?

Folks I would not underestimate what Unidesk have. From what i have heard from a friend they are much more baked than Atlantis and do some cool things with Disk layering with a good management GUI to help pull it all together. I've heard so much hype about Atlantis in this space, and it simply is no where close to being ready. I think Unidesk are smart waiting for their product to bake before making a splash, unlike Atlantis who went to market too early. I am personally looking forward to their beta as I think this could be a way to do layers with the management there also. Of course we'll have to see what this means for adoption and app compat, so I'd encourage everybody to keep an open mind. Certainly they are not just hype from what I have heard.

@appdetective - [edited out by Gabe]

Have you even tried Atlantis at all? They actually do what they say, unlike some of the lack-luster vendors you've been promoting on this blog. As of Unidesk, they're nothing but an Atlantis wannabe, and that's per their admission, believe it or not. When we asked them to demo their product, they absolutely had nothing to show for.  They're months away from having a product.

[edited out by Gabe]

@edgeseeker - One warning.  Keep the comments on topic, and leave the personal remarks out of it.

Yep went through an Atlantis setup, was painful. They could go in so many directions server virt or destkop virt, they lack focus and hence why IMO they are getting limited traction. That said I love their forward thinking but not a baked solution yet, hoping they will get better because Chetan who I have seen speak is a good guy. Unidesk now especially with Ron I think and the leadership of Don will be somebody we can't ignore. None of those guys are stupid and their judgement track record is spot on. It will interesting to see how these two play out vs. the other layer options. I doubt any of the big guys will care about the concept for a while, and for now we'll just have to deal with profiles getting a little bit better. Uggh.... but glad smart people like Ron are on the case to change the way this is done.

I knew it - Michael Schumacher is app detective!

@appdetective -  We've had a philosophy of release early and learn early.  Itâs helped us pivot and build a feature set that maps well to enabling real world and at scale VDI.  Your feedback (while not the tastiest) is constructive - thanks!  We've done a lot of work to flatten the setup and you might be pleasantly surprised our latest and greatest release. Also we've clearly forked our products along server and desktop virt lines - so there's a lot less confusion.  All of this came from releasing early and learning in the real world.  Over the long term - the best way to build a product this technically and operationally challenging is to do it with transparency and lots of input.

I do want to address your comment about limited traction, which I disagree with.  We have several large (several thousand desktops) production deployments for VDI in place and some even larger ones rolling out by end of Q1 (tens of thousands of desktops). So far Customers have chosen Atlantis   because itâs baked well, scales well, has jaw-dropping performance and offers the best optimization of storage and management cost per desktop.  There are many customers and partners who are enthusiastic evangelists who can attest and there will be more in Quarters to come.

When Quantifying what Atlantis brings to VDI  today, you'll see that its impossible to do desktop virt without addressing the underlying storage, IOPS and storage fabric costs.  In never never land, VDI is a p2v away and layering is the silver bullet for all desktop management woes. In the real world of  at scale  VDI - layering is possible  only because there is a intelligent storage foundation  that enables it.

So far VDI has been all sizzle and no steak.  It has been about simplistically containerizing Windows workloads without considering that the assumptions of the Windows desktop storage model underneath it. These assumptions are as old as Windows itself and the folks in redmond never wrote this Operating System with a Tier 1 FC SAN environment as its primary storage in mind. If they had âa cluster able virtual memory and paging model, a virtual storage aware NTFS, multipath loadbalanced IOPS,  caching and process isolation would all have been designed  into Windows itself and there would be no need for an Atlantis  to  exist.

Our focus has been on building a strong storage foundation for VDI and leveraging that foundation with image management and layering. We provide -  layering, Provisioning, patch update management, IOPS acceleration and primary storage data de-duplication across multiple data centers   in ONE package on a storage mix that brings cost parity between a physical desktops and in the datacenter while exceeding its performance.

Our productâs job is to flatten all the image, IO  and Storage challenges allowing you to focus on what matters - Users and applications. That's how Dad did it, that's how America does it... and it's worked out pretty well so far :)

@chetan. Thanks for a great post. See I told everybody you are a great guy :-) I'll say that local storage is still the way to go for hosted desktops because of the persistent vs. pooled desktop argument for now until people like you enable a new tomorrow. Good to see you listened to the feedback and I certainly say brave of you to iterate your product so early so publicly, but that's your call. If your product has become simpler to install etc then agree worth another look. It will good to see how you compare Unidesk when they release. From a customer point of view I am all for a good race and innovation unlike the bigger guys who will move at snails pace. Best of luck to you.

Ron going over to Unidesk gives some credence to the hype but a product is justification. They are currently in the vaporware category until I can get something in the lab. I am hopeful when they release a beta and better a shipping product.

Anyone who has not contacted Atlantis that is doing VDI should. Their product is compelling and does require some hoops but it works and we had it in a test environment and spun up machines and saw some of the things it did and how it can help us get closer to what we think VDI should be. Is it the silver bullet... not for us but it does go along way. That being said it adds alot of value and some places it might be the silver bullet.

Best of luck to Ron as so much of the content he has created has been wonderful to myself and other in the community.

First of all, Iâm clueless as of what Unidesk might produce, except vague talk of VDI with Client HV hints.

Secondly as much as I appreciate Ron (and other people @Unidesk) I think itâs unwise to put too much confidence on people based on their past merits, for all sorts of reasons. Being a visionary does in no way equal success, as history proves time and again.

Fact of life is that Unidesk is yet another startup with an uncertain future in a highly competitive landscape.

With that said, I wish Ron and Unidesk the best of luck as I do for everyone contributing to competition and molding the land.

I guess speak for more than myself when I say that Iâm eagerly waiting and looking forward for what year 2010 brings forward in these technologies ;-)

I agree, Ron going to Unidesk, for me, gives them a bit more credence than they might have had before.  I have read Ronâs books and continue to use them as reference guide. Like Brian, he truly is one of those folks in our industry that have made an impact and will continue to do so in the future.

Will this influence our organization to go with Unidesk? Probably not. Granted, it is high up on the Geek Meter but the reality is that our CIOs and Executives do not know Ron Oglesby from Ogilvie from the Bad News Bears. The decision will have to run much deeper and be offered by our Outsourcing Infrastructure vendor.  (That is painful to write)

I guess going forward it is going to be unavoidable to speak about Unidesk, without speaking of Atlantis as well. These technologies are new and we as a community lack those tangible intrinsic facts that really make a grounded product assessment viable. It is very normal for us, humans (and IT Geeks), to make up or rely on our own personal version of the truth which comes much from what we hear and not what science or fact tell us.

That being said, I have seen Unidesk (which I am sure is the same WebEx demo that many of you have seen). I agree, it looks cool and promising, however, I cannot provide a grounded comment simply because I do not have the product in my hand to really see if we can make it work in our highly regulated environment.

I can say much of the same thing about Atlantis with the exception that I expect to take delivery of the product within the next 2 months. I am targeting a very specific use case with the hopes of not just changing the game, but recreating it. As I have posted / blogged in the past, once I have some experience with the product I will relay my experience as it pertains to what I have done.  Until then, I will leave my beliefs and thoughts to myself since I am sure that most of you do not care anyway.

Congrats Ron, you are a warrior for lasting there as long as you did. Everyone I know that works there OR has worked there hate it. Good Luck with your new role.

I can confirm that Virtual Computer is definitely not vaporware.  It's still being refined/improved, but it's very much usable product.