I'm sad to share that friend-of-the-community Clint Battersby passed away last week after a long battle with cancer. Clint was the CTO of Desktone and a friend of many BriForum attendees and BrianMadden.com readers. Those who were lucky enough to spend any time with him remember his quick wit and penchant for doodling supporting diagrams for whatever he was talking about on the nearest white board, tablet, or napkin.

I first met Clint at BriForum 2007 Chicago. Back in those days we had a smaller venue with physical capacity limits. So it was typical that we'd actually sell out and have to turn people away. A few weeks before BriForum 2007, Clint called Emily and explained that he was the CTO of a new VDI startup and that he had just heard about BriForum. He asked if there was any way he could attend despite us being at capacity.

"Is there ANYTHING I can do to get in? Seriously? I can be a dancing clown. I'll follow the speakers around with fans… ANYTHING?" 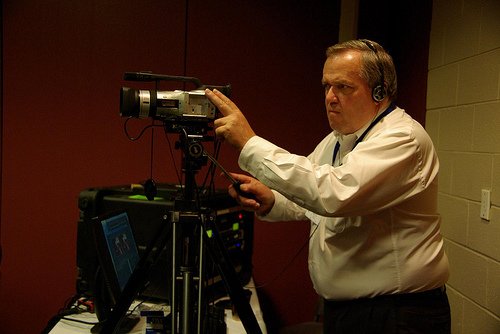 Don't let Clint's serious focus in this photo fool you. On the last day of BriForum 2007, Clint told us that he had a blast behind the camera and actually volunteered to operate a camera again the next year. We tried to offer him a real ticket instead, but he insisted that he liked the camera role, so who were we to argue!

A lot of us in the community knew that Clint was sick, and a lot of people cared about him and have asked about him over the past year or so. Clint was a great guy. Super smart. Could explain anything with a pen and a napkin. I'll miss him dearly and cherish the memories of the time we spent together. (And ironically even though he lived in Boston, I always met him in the most random locations.. Silicon Valley, NYC, Chicago...)

So to his family: Know that in addition to the people you've heard from, there are a few thousand more of us who were happy to know your husband and father. We learned a lot from him. We'll pass it on.

This is sad news. Like many others, I will miss Clint a lot. My thoughts are with his family.

Very sad news.  Clint was a really smart guy, incredibly friendly and nice. And above all he was genuine. He will be missed a lot. I really wish I got to know him sooner than I did. Truly a great man.

I first met Clint at his company "Whosh!", located about 2 miles from where I lived.  This was in early 2000 and his company provided some software to allow SoftwareWow to cache streamed apps.

Clint was always a great guy to be around, whether talking tech or beers. I'll remember him as "unfiltered, but not uneducated".

I remember at BriForum 2007 when I asked him what Desktone did (this is before they came out of stealth mode). He pointed to the stage where a session had just completed (I think it was a VDI session by Ron, back when VDI was still really new) and said "It's like this, but better." You could see he was fighting to not say what he was working on, but he still couldn't hold back his enthusiasm.

I only met him a few more times over the yearsâ¦BriForum 2008 and a conference here and there, but each time he had the same positive energy. I wish I'd have gotten to know him more, but the times I did spend with him were memorable.

It just occurred to me that Clint was solely responsible for saving the BriForum 2008 video recordings.

The background for the story is that, to record BrIForum presentation screens, we had a VGA splitter at the front of the room, connected to the projector and a recording box in the back of the room. Halfway through Day 2, or 25 or so sessions into the show, we hadn't gotten a single screen recording right, except for one in Clint's room where he was running a camera (the one in the article picture, actually).

To be honest, I sort of laughed it off, like "Haâ¦there's now WAY the background color would affect anything!" Still, it was all we had to go on after a day and a half of working on the problem. I asked the speakers to switch from black to gray (as in, #000000 to #222222), and it solved all of our problems!

It turns out the 100' VGA cables that went from the front of the room to the recording rig in the back were taped down to the floor next to the power lines, and the analog signal transmitting the mostly black image was overpowered by the noise of the power line and whatever else was going on in the room. Changing from black to gray created a stronger signal and overpowered the noise, saving the video recordings from the rest of the show.

I always felt bad about laughing the background color thing off at first, but I'm glad we tried it. I'm guessing the attention to the small, fringe details that Clint showed then appeared in everything he did. I know it saved our butts!

Thanks for posting this Brian. I had the honor of hanging with Clint a few years back at VMworld. There was so much wisdom there. I remember hanging on every word because I knew this guy had been through it all. More importantly he was just plain cool. He gave me some advice that night that I will never forget. He will be missed. My sincerest condolences to the Battersby family. â Mark Knouse

Thanks posting this up Brian!!  I had the pleasure of meeting Clint and talking with him at length about DaaS at Synergy 2009.  What a great guy, super smart, and as Shawn put, very genuine.  He will be missed and my thoughts are with his family.

I spent a fair bit of time working with Clint during my stint at Citrix.   He was incredibly genuine, personable and a real pleasure to spend time with, and a visionary technology leader.

Clint and I became good friends during our time together at Desktone.  He was a true gentleman and a caring individual who always greeted you with a smile and treated everyone with respect.  He was a hard worker, regularly spending late hours in the office, on the road, etc. and was incredibly dedicated to the success of Desktone and its team.  He was also a brilliant technologist, often drawing sage analogies from his lengthy and vast experience in the IT industry.

He will be sorely missed and my deepest condolences go out to his family.

Thanks for posting, Brian. I met Clint for the first time in 2008 at BriForum and he had a warm heart and a roaring laugh.  He was a great, great individual and he will be missed!

The Desktone family is touched and thankful for everyone's kind words and anecdotes about Clint.  He was an integral member of Desktoneâs foundation in his contributions to the technology, but even more so for the countless ways he enhanced the lives of those of us who were blessed to share in a practical joke, a funny story or just enjoy his consistently optimistic and  lighthearted approach to life.  His passing was far too soon, but the memories of those who met him over the years prove that he made a lasting impression in his short time here with us.

Very very sad news indeed -- and a great loss to all of us. Clint is such a smart and genuine guy -- and very passionate about what he does. He and I shared many common roots in areas from caching, CDN etc -- and I always enjoyed his company.

My sincere prayers and best wishes for the family.

In 1996 I was working at the Boston Computer Museum. Owen Mysliwy and I were trying to figure out how we were going to provide 50 different kid's software titles on CDs to 14 computers with 200 meg hard drives for a new exhibit we were planning called âThe Best Kidsâs Software.â

We had come up with the idea of hosting the CDs on a big server that would "stream" the applications to each desktop. Sounded good in theory, but all kinds of problems resulted. One of the biggest problems was network traffic - each time a person called up an app, it would completely slow down the network. A few weeks before the exhibit was set to open we were stumped. Performance was unacceptable - apps were taking minutes to open, and the video and audio for the kids games were stuttering... what to do?

Enter Clint. Owen had found his company -  I believe it was called LanCache  - and he showed up to help. For the next few weeks he was a permanent fixture at the museum, helping us by adding his caching software to each computer (making the performance of the apps seamless) and then helping us fix the other issues we were facing as well. The last few nights before launch I remember him pulling all nighters with us. He truly saved the day!

He went on to help us with SoftwareWow and then Softricity (think of him when you use the cache in App-V)...

Weâll all miss his great passion. I loved reading the comments above about his use of a whiteboard or napkin. So true.

Thanks so much for the photo, Brian. Clint had endured a great deal over the past 18 months. Your picture is the way I prefer to remember him:  A strong physical presence; knee deep in technology and gadgetry; totally immersed and focused in whatever he chose to do. Clint was my partner in crime and alter ego at Desktone starting from about the time of that photo â it was the best of times... A large gathering of family and friends gathered to bid him farewell this morning, but the priest was closer to the mark with saying âAlohaâ.

I was talking with those around Clint, and he wanted to get back to work so bad, he was just so frustrated that he couldn't simply get up and do things with computers, etc. He and I used to go to many computer shows together, and we would talk computers and technology. I would give him suggestions and he would tell me how things he tried worked, well or otherwise. My cousins told me how clint used to love spending time with me, etc. Never thought he would not be around, always seemed that he would be around to experience all that is new. I enjoyed showing him all the new things I would see, etc. Take care clint, and we in his family. We'll miss you!!