I've loved Ardence since I first learned about them in 2006. If you don't know Ardence, they basically did disk block "streaming" where you take the hard drive out of a computer, do a PXE boot, and it connects to a central image which is run locally on the desktop. You get bare metal (i.e. no hypervisor) performance on your desktop, and with 100MB or 1GB networks and a bunch of drives and cache in your server, you can actually get better performance than a local disk.

The real advantage though is the central management, security, and the ease of reverting back to a stable state (or swapping out an image) just by rebooting the desktop. (It's like an instant version of Ghost, or a more secure version of Deep Freeze.) Again, check out that 2006 article for the details on the concept.

Unfortunately in December 2006, Citrix bought Ardence. That wasn't necessarily a bad thing—certainly it legitimized this "weird" concept—but over time Citrix evolved the solution into Citrix Provisioning Services (PVS), merged it into the XenDesktop and XenApp suite, and refocused it on virtual desktops instead of physical.

So for the past five years or so, a lot of us in the industry have longed for the old days when we could just buy PVS as a standalone product and use it for our desktops instead of getting wrapped up in the whole VDI / Citrix Suite thing.

And that's where Jentu comes in. Jentu is a new software company with a product that is essentially exactly what Ardence was in 2006. (And that's a good thing!)

Honestly there's not much more I can really say about them. I originally thought I was going to write 1,000 words about how awesome this is, but meh, if you know Ardence, you know Jentu. Their product is available now after having been something they originally wrote eight years ago to simplify the management of desktops they were responsible for while they were working at an MSP.

I love the idea of simplifying desktop management for the 95% of the world that isn't on VDI. Obviously this solution only works for on-premises machines that are on the same LAN as your file server, but for actual desktops and laptops used on site, I love this concept.

Jentu has a simple admin UI and you can get the whole thing up and running in a few hours: 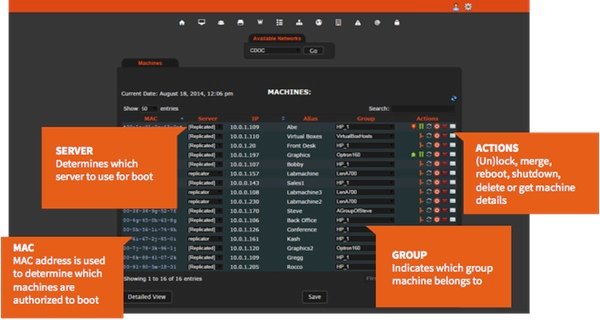 When using Jentu, the local hard drive is not used at all—not even for a cache. You can literally remove the drives from your desktops. They support both persistent and non-persistent images, all connected by iSCSI on the backend, and they can map different volumes for different users for personal data.

Welcome to our world Jentu!

Jentu would be nice except that every IT dept is afraid that Citrix or Vmware would do something to lock them out of their platform if it takes off.

Which is why most IT dept are either VMware or Citrix shops they're afraid of adding variety.

Citrix hat off... (Anything I type is my opinion and does not represent Citrix.)

As an 'Ardence guy' I can safely say what they are claiming is pretty cool and in concept is a great idea. At a quick glance:

- Their company profile is lacking via LinkedIn: http://goo.gl/vr9L4O. I mean the average employee has only been around for ~10 months or less.

You comment: "Their product is available now after having been something they originally wrote eight years ago to simplify the management of desktops they were responsible for while they were working at an MSP."

Can you expand on their history, because let's face it, there is not much out their and their site is almost too simple.

Their CrunchBase profile is non-existent as well and there is no notion of a CEO and to be honest, their LinkedIn list is not all that impressive.

- Their marketing value is literally a cut and paste of what Ardence (and others of that day) use to tout (and still does as PVS).

- They only have a 'desktop' play because they are an LAN based solution.  There is no mention of 'offline' in any of their marketing which in my many years has been a hurdle even for a LAN based desktop.

- iSCSI... their technology or standard iSCSI with a supported network card in the device?  What is their secret sauce?  Reliance on hardware at the end-point? iSCSI reliance while a simple standard, is dangerous. This is why Ardence was really special.

Remember emBoot and this article:

End of day, emBoot blazed the trail for iSCSI and sadly have gone to die at Double-Take.

The question is, why?

Because... Ardence, emBoot, Neoware (HP/Qualystem Technology S.A.S.), Wanova, Wyse WSM and now Jentu will all have the same issue; windows drivers. Overloading works to some degree, but Windows eventually gets bloated and does not like it. The funny thing is, Neoware actually had a solid management solution and then got scoped up by HP and died.

Hopefully driver management will get easier and great technologies like these could actually make an impact.

Thanks for your interest in Jentu. As the senior developer of the platform, I can try to quash some of your concerns.

- I'm not on LinkedIn, though I've been with the company for more than 2 years. I just don't like LinkedIn. I don't think that's a metric to base a product's maturity on.

- The product has been in research & development phase for 8 years, and in the last two years has been packaged for sale. It wasn't an MSP we were working at, it was our own MSP.

- Jentu provides more stability and features than Ardence does. Built-in replication, fail-over, workstation-level checkpoints, group-level checkpoints.. We use ZFS for storage which means, even with 16GB RAM and 2x2TB consumer-grade SATA (WD Blacks) we achieved about 500 IOPS per machine with 50 machines on 1gbit, mostly random writes and reads (80%/20%) and 64k I/O size.

In addition.. Jentu provides all the source code for everything that's running on your Jentu server. Does Ardence show you how their drivers work? Jentu doesn't even need custom Windows drivers. We use OEM network card drivers. There's no need to modify Windows or the install procedure to make it boot from Jentu.

As a result of having our source code, you can modify your server in any way you like. Want to change the iSCSI daemon? Go ahead.

- We're not going to stop users from writing iSCSI volumes to a local hard drive. We didn't mention it because we didn't want to unnecessarily write a proprietary piece of software that's only meant to make money. Instead, you can use industry standard iSCSI and a Linux Live environment to 'dd' the iSCSI image to a local hard drive.

- Why is iSCSI dangerous? Proprietary protocols (like what Ardence uses) are dangerous. You've got it backwards.

End of the day, you're never really going to be able to overload a Jentu server the way you will one of the others. Our adaptive cache is just too good.

No drivers to manage. What are you talking about?

By drivers I merely mean:

How do you guys deal with drivers for each especially when you scale out to 1000s of devices.

Listen... The concept is great and hope Jentu will be successful.

RE: LinkedIn - Don't under eatimate the power of social media outlets. Perception is everything.

Also, I didn't mean to come across as short or aggressive in my above post. I had written a longer response, but was erased by accidentally clicking that "back" key next to the arrows on the thinkpad. Oops. :-(

Ah, that's a different concept, I was initially thinking of the netboot device drivers.

Unfortunately, you're right. Windows has its own issues with having stacks of drivers in the system, but so far, when we use one-image-per-identical-PC (i.e. one image per model), we haven't had that issue. When a system asks to reboot to continue installing drivers, we merely update the group from that PC, and continue until the group contains all drivers. From that point, it's easier to maintain.

Hope that answers your questions. Hope there's a better solution for driver management around the conrer, too!

Friendly debates are fun.  No harm, no foul in my book!

I have a lot of experience in the space.

Might not be the remedy for the drivers listed above but will speed up boot for any windows 7 machine.

Citrix doesn't know what they have with Ardance.

It is a potential giant cash cow that could be sold stand alone on its own merits.

I did my first install of Ardance/Citrix Provisioning Server 5 years ago for a school system. it is really sweet.

It allows fast upgrades of OSs and access to multiple OSs.

It could be the universal standard streaming deployment software for servers and desktops alike - both physical and virtual. It works great with XenDesktop and would work for VMware View desktops as well.

We love Ardence, though admittedly, we had written Jentu long before I heard about Ardence, not to say I hadn't searched! We had our own vision of how the interface and network would operate when we created Jentu. You could request a demo and see the differences for yourself! I would love to share some videos, but a lot of us are camera shy. We're working on it :-)

A single server license is included in the workstation cost, however, additional servers for high availability and failover will require additional license with optional add-ons that have their own individual costs (such as load balancing, advanced replication - see the KB for more)

This is not virtualization (though, we do support its use). Jentu does not suffer the bottlenecks of VDI. On the contrary, Jentu has an adaptive cache whichÂ learns how your workstations are using the OS and keeps frequently accessed bits in memory. Because of this adaptive cache, Jentu does not suffer from boot storms -- that is, Jentu will not slow to a crawl when 100+ users simultaneously start Windows.

I am from Mexico. I have been working virtualization for the last 12 years. I started with Ardence in 2005. I was distributors of Ardance in Mexico until 2006. After CETRIX bought the software, I immediately started to promote VNTC diskless solution to my customers. If you had a good experience with Ardence I am sure you will be more than happy testing VNTC. In my opinion VNTC diskless solution is much better solution than Ardence.