I realized as I was writing today's VDIworks article that we never published the performance videos that we recorded last year when we visited Qumranet's (now Red Hat's) offices in the Bay Area.  The information we got is very interesting, but publication was hung up when Red Hat acquired Qumranet, and the videos got lost in the shuffle.

The test methodology was pretty simple - we wanted to see how each protocol (SPICE, RDP, and ICA) performed in a controlled environment.  We did this before we stress-tested the SolidICE and XenServer-based solutions, so this has nothing to do with server sizing or anything like that.  This is a simple setup with one client talking to server running a single XP virtual machine.  In each scenario, we ran through the same tests and recorded what the user actually sees as well as what the CPU utilization and network bandwidth metrics within PerfMon showed. Each of these scenarios can be viewed from within the player after it is launched:

To watch the videos, click here or on the screenshot below.  During each scenario, you can click the Swap button under the small video to swap videos from small to large. It's especially useful in this case since you'll sometimes want to see the user experience in the big screen instead of staring at PerfMon for the entire segment. 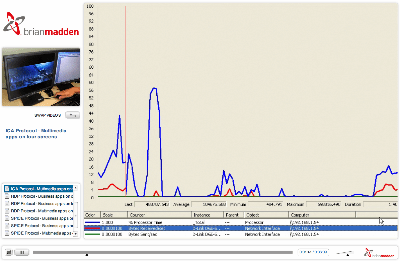 About time these were published, there were posts on this request last year :-(

Anyway, good set of basic tests concurs with what I have done with my own testing. SPICE is very heavy on bandwidth, and RDP is not great, and CPU dies quickly. I have also tested with regular PC-IP and RGS and bandwith there is also high. ICA audio sucks still.  I care about bandwidth and latentcy and overall ICA wins handsdown, once you add these factors in and start to consider the number of sessions one can support.

I've also tested some of the more recent additions with ICA/HDX and audio and video experience is much better. RDP 7 also tested well, but again not as good on Bandwidth, or CPU. I havn't tested ALP from Oracle/SUN, or bothered with EOP from Quest yet.

It seesm to be there are only so many tricks one can do with the protocol, and there are too many of them. That said combined with WAN accelerators (I have to do more testing) intiail results show improvements. It's also seems that once the ICA guys start caching comtent with their network appliances etc, they have a piece of the puzzle that nobody has that will continue to give them the edge.

Just out of interest, with the ICA tests, were you using XD 3.0 and HDX MediaStream?

I've done some similar tests myself and saw much better video performance.

Also, the FP1 VDA has better support for VoIP.

@Gabe, Where can I find those AutoIT script's you guys used during the Presentation? Brain mentioned during the video you guys would post them, I can't seem to find them.

stellar video, now RDP7 needs to be added into the mix.

I expect the best results with XD 3 FP 1.

Most people test with 2.0 due to compatibility issues.  We should all know by now in the world of technology the newest isn't always the best.

Keep updating, all of the bugs will wind up working out eventually. Persistence is the key to almost anything you wish to obtain in this world.

It is really interesting to see the performance difference.  Businesses are eager for more <a href="http://www.neverfailgroup.com" rel="">business continuity</a> in their systems.  This looks like a great selling point for this technology.  Thanks for posting these results.

It is really interesting to see the performance difference.  Businesses are eager for more [url=http://www.neverfailgroup.com]business continuity[/url] in their systems.  This looks like a great selling point for this technology.  Thanks for posting these results.