You may have noticed that I haven't written much on BrianMadden.com for the past few weeks. That's because I've been putting the final touches on our new book, The VDI Delusion: Why Desktop Virtualization Failed to Live Up to the Hype, and What the Future Enterprise Desktop will Really Look Like. This book was cowritten by Gabe Knuth, Jack Madden, and me.

Even though I've written a few books in the past, this is the one that I'm the most proud of. It's literally a brain-dump of our 16 years in the industry and I view it as the culmination of my career so far. We open the book by asking this question: If VDI is so great, then why does it only have a 2% market share? Then we dig into all the reasons why and look at the alternatives, including RDSH, client hypervisors, and good old-fashioned well-managed Windows machines. We also look at the future, including HTML5 apps, mobile apps, and how this all hooks together.

At a speech in LA last month, I was accused of being a "VDI hater." What I hope this book will show is that I don't hate VDI per se, rather, I hate when VDI is used in situations where it doesn't make sense. We argue that VDI is not about saving on management or costs, and that in fact it's really hard to put desktops in the datacenter.

We think this book covers everything we'd ever talk about. It's literally been 16 years in the making, and now it is THE definitive book on VDI and desktop virtualization strategy.

The Kindle version of the book is available now ($9.99), and the hardcover will be out in May ($25.99). BTW, you don't need a Kindle device to read the book. You can also use your computer, phone, or HTML5 app at read.amazon.com. (Update March 23: It's now available on the Nook too.)

The book is available for Kindle now and will be out in hardcover in May. (Just in time to pass out some free copies at Synergy and BriForum London.) 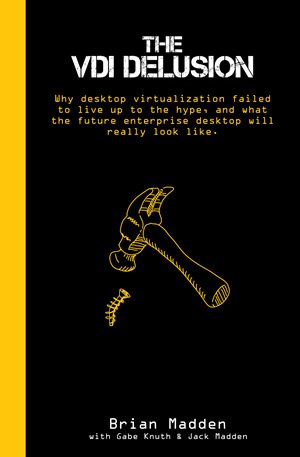 Yeah, that's a picture of a hammer pounding in a screw. (That was Jack's idea—brilliant!)

From the back cover

For many years we’ve been hearing that the future of the desktop is going to be VDI. Clearly that hasn’t happened. Server virtualization has been wildly successful, so why not VDI and desktop virtualization? What went wrong? If VDI is not the future of the desktop, what is? Whether we like it or not, the desktop is evolving. Users are able to download apps, access web services, and buy devices on their own. What can we do? How can we provide users with corporate Windows desktop applications while also enabling SaaS, web, and HTML5 apps?

This book recounts the original promise of VDI and why the reality fell short. It shows how to step back and figure out what problems we’re really trying to solve, including when it makes sense to use desktop virtualization and VDI and when to stay with traditional desktops. THE VDI DELUSION closes with a look at the world beyond Windows and what real steps we can take today to create the future enterprise desktop

You can also get this book free from Quest Software

As a final bit of fun news, Quest Software has sponsored the distribution of some copies of this book for free. If you go to our Bitpipe.com site, you can login there with your TechTarget account and share your contact info with them to get the free version of the book in either PDF or Kindle version.

The free version will have an extra chapter in the end written by Jon Rolls talking about how Quest's desktop virtualization products fit into the overall picture. So if you don't want to pay for the eBook then this is a great option. (And to be clear, Quest did not sponsor or influence the writing of the book itself—they're just sponsoring this distribution. They also have some hard copies that they'll give away at conferences.)

So there you have it! You can buy the ebook now via one of these local sites, and the hardcover will be available in May.

Forward by Kevin Goodman telling his story with VMware is heroic!

Can't wait to read the rest.

The red pill exit for the VDI matrix - without the waking naked in a pile of goo bit.

A well paced read through the history , promises and reality of the VDI world, probably the best $10 VDI investment you'll make.

Just downloaded - can't wait to read on my flight tomorrow!

Thank you Quest for free copy.

This book depressed me.... for me it reinforced the fact that the  same application delivery / execution/ distribution problems or challenges are still with us as they have been for 10+ years.  We can cope faster and deliver better solutions today but hardly much different then in the past.

in a big way...and this fact may determine the direction of many solutions. The masses determining the future!?  We are doomed :)

Many good points made, but I'm not looking for a day job anytime soon.  There are still too many use cases where VDI makes sense if done properly, and I am a true believer in layering and "cutting edge" stuff like Atlantis ILIO that can make this stuff work cost effectively.  I have seen too many successful 30K-50K seat deployments (granted where cost savings were not the objective) to write off VDI just yet.  As was pointed out (and I hope the point was not lost) there are FAR too many mission-critical applications running in Corporate America whose IT departments are clueless about re-coding in Groovy on Grails.  The army of .Net developers is still in full force (at least in Bangalore.)   If you want to call VDI a "stop-gap" go ahead, but I think there is still a Window where it will fulfill a real need as long as vendors don't over-hype it (which is what I really took away from the book despite its "gloom and doom" title.

@jklincewicz I am about 2/3 through the book and I haven't seen anything that says Brian is writing off VDI.  I also hear about the 30K - 50K success stories but I would love to see an actual company step forward and say "Yes, we have 50K Seats all VDI and it's awesome".   I know of Michaelâs work at Emory Health care but that is the most successful one I am aware of.

I think the title embodies some of the exasperation on the part of a number of professionals who have endured, what seems like, the longest hype cycle in IT history.

There are some parts of the book that I donât totally agree with but overall I am very happy (albeit with 1/3 to go) with the content and I do believe it is a fair critique of this technology.  I guess the chip on my shoulder with VDI was the fact that it started gaining momentum right when the SBC environment was really starting to come around with accommodating a different applications (at the time, AIE and later Softgrid/APP-V, etc) and I was like âHey, donât quit on SBC so fast, things are just getting betterâ.

Is it possible that the penetration of VDI is similar to the penetration of SBC in itâs 4th-5th year and just needs time?  Where I work, we also have 10âs of thousands of employees but it is made up of several different sub-groups/Departments with their own cost centers and their own standards.  While we may be able to impose a select group of approved hardware, in large environments, C-Level execs may not look at VDI just to avoid that battle alone.  âYour approved hardware is now Thin Client âXâ and XenDesktopââ¦.that may not go over so well if incumbent groups are used to having control of this.

I still see VDI as a role player as I can deliver a full desktop to over 70-80 percent of my users with XenAPP published desktops.  SBC does not come without its pain points and there are definitely cases where XenDesktop is a more supportable solution (letâs face it, integrating apps with SBC can be a drag).   If someone needs 20K remoted desktops and they donât have an experienced SBC personâ¦VDI is certainly the least painful transition.

Hopefully Brian doesnât get a barrage of hate mail from Vendors after this book.

I read this book on the way back from BriForum 2012 London.  There is more practical information in this little book about how to think about and implement desktop virtualization than in any other single location I've seen.  Should be required reading for any IT manager thinking about how best to deliver Windows desktops (physical or virtual) to their end users.

This is an excellent book. I'm impressed with the way you three distilled what are some complex issues into truths.

I agree that VDI has a place, but have to side with those that think it will be a stop-gap measure. Eventually (soon?), all software will be available online, built around functions and workflows instead of old-school Desktops. It may or may not be available from "the cloud" (whatever your definition of that is), but it will be available on whatever toy you got last Christmas (whether from your IT department or Father Christmas / Santa Claus)...