Or maybe that should be "desktop virtualization angel," in that Oracle will do with the Sunrays what they did with their own NCs a decade ago?

Am I joking about that? I dunno. I still don't "get" why people like Sun Rays so much. To me they are super complex, super expensive, super proprietary thin clients, but the people who love them really L-O-V-E them, so hey, more power to them.

Let's look at this Oracle and Sun thing. From the desktop and application virtualization perspective, does this affect us? I guess to figure it out, we should first look at what Sun and Oracle each have in the desktop space on their own.

What does Sun have in the desktop virtualization space today?

Sun actually has quite a bit of stuff, although a lot of it is a smattering here and there that's not necessarily all related. Sun's current plays include:

Wow! If you take everything that Sun is doing and condense it down into a single list... it looks decent!

What does Oracle have in the desktop virtualization space today?

Oracle is huge, doing about $20B a year in sales. But from a desktop virtualization standpoint, I don't think they have anything at all? Searching twitter for [oracle vdi] turns up nothing, and searching Google produces a few links to a promotion Ericom did where they offered their solution for free up to 50 users, and to do this they leveraged the Oracle VM which is a free virtualization platform based on Xen. So really, Oracle's "play" in our space is:

Oracle also has a special place in my heart (seriously) because they were the company who introduced me to thin client computing. Back in 1996 (yeah, I'm old enough to remember that), Larry Ellison got all excited about the Oracle "Network Computer," or simply "NC." This was a diskless workstation that booted from a central server. It wasn't quite the same thing as a thin client in the sense that we think of thin clients today; rather, it downloaded a disk image at boot time and ran its OS locally. They really focused on running non-Microsoft apps, such as Java-based office suites and browsers and stuff. Citrix even got in on the game by partnering with them to use ICA to have these things act as thin clients connecting to WinFrame servers. 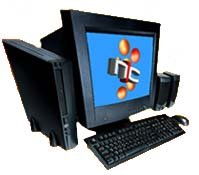 The main selling point of the NC was that it was cheaper than a PC, both to buy and to maintain. Microsoft fought back hard, though, with things like the Zero Administration kit and the compatibility of Windows (and the NetPC.. hah!), and by about 1999 or so the NC was dead. (Here's a fun article from CNet from 1996 talking about the launch of the NC.)

But I do remember using an NC. The first thing I did was fire up Netscape and hit Alta Vista. I couldn't believe how cool this thing was! All these terminals with no locally-installed OS! Little did I know that thirteen years later, I would be doing nothing but this.

So what does this all mean for us? Sun and Oracle are both pretty hard core anti-Microsoft companies, so the two of them getting together to form a single $30B+ company should be a great counterbalance to Microsoft's power.

And it seems that there won't be too much overlap (with regards to desktop virtualization) between the two companies, so I assume that everything Sun's doing in this space will continue.

What else? Do we care about this? Or does the combination of two companies that aren't that relevant just make a bigger company to ignore? (Again, speaking within the context of desktop virtualization.)

I can't see this being interesting in a world where MS owns the desktop. This seems to be more of a cloud service provider player.

my $0.02 is that the deal puts oracle in the top three which is no small feat - all they need now is a services player and they can take on IBM, HP head on.

They now have OS (Solaris) + DBMS (Oracle, mysql) + Apps (lots and lots) + devtools (Java)  + hardware (Sun hware) + storage (sun).   While on the face of it There's very little tech relevant to desktop virtualization, Oracle now has some of the coolest tech under one roof -  storage (storagetek + ZFS WOW! and btrfs) + hypervisor (sun xvm) + connection broker (sun vdi) + protocol (ALP) + thin client device (sun ray). They can deliver end to end solutions for Oracle apps on vdi or teminal server (tarantella did seamless publoished apps). ( In the end it always looks like Citrix is the one who loses.)

They can finally stop stealing Red Hats code and actually deliver VMs on solaris (which oracle has run very well on) which is shaping up very very nicely under its open source license.

This one baffles me.  Larry E must be hard up for some press these days.  IBM buying them I can see.

Brians remarks on the NC reminds me of an earlier implementation by Sun.  I remember buying a boatload of Sun 50's in the mid-to-late 1980's.  These were fully powered diskless workstations that booted off of the network (bootp/tftp if I remember right) and used nfs to access shares on the server for data storage.  These were very cost effective for my developers for the time.  When Oracle got hot about the NC I remember thnking "been there, done that, threw the T-shirt away".

The Sun's rays are good for production of Vitamin D in the human body.

Sunray clients are still the best bang for the watt at the desktop with only a few rivals out there.  Also, as far as I know, for people in the DoD space they are also the only game in town that can be on both cleared and uncleared networks due to their stateless nature and fiber option.  I believe Secure Computing offers the client as well, but they simply re-brand Sunray devices.  Another company (ThinID.com) is leveraging them heavily in order to present stateless desktops for health care customers who require simple and fast session portability.

I'd take you comments more seriously if I know you'd ever really given Sun Ray a proper look.  I believe last time Warren Ponder and I sat down with you at iForum (before the rename) you said you were just to busy to do stuff like that.  As far as "super complex, super expensive, super proprietary thin clients" that's just plain FUD.

Offer still open for you to do a review.  Just tell us you want to do it.

I knew there was reason I stopped reading your website three years ago. If one of my co-workers hadn't told me to read this today, I would have never bothered to look. I learned years ago that your livelyhood sat on the back of Citrix, and getting an honest "indepdent" evalutaion of thin-client technology from you was

useless. You call yourself a "independent thin-client expert",but really you just push technology for Citrix,VMware, and MS. I have no problem with anyone of these technologies, and help manage all three of these technologies throughout my company.  I have to laugh at you and your Citrix goons  (Joe Shonk..if there really is a Joe Shonk.) when you bash Sun Ray's or whatever other technology that you're clueless about.

I have been running Sun Ray's and Wyse terminals for over 6 years at my company, and they both have their strengths and weaknesses. I've even been delivering Windows desktops (using Citrix) on both Sun Ray's and Wyse terminals for years with no problems. Like anything, there is time and effort to learning the Sun Ray software as there was with Citrix, but Sun Ray has been able to give me something the other two have not...major savings!!! With Sun's RDP connector, I've also been able to phase out - as much as I can - my Citrix licenses. (Which cost a ton...something you always seem to ignore.)

This is something you never have been able to show. All you focus on is the techology which shows me you've never had to run an IT budget in your life.

When you have to decide what to spend your money on, things like Sun Ray's all of the sudden become relevent. Citrix is a good tool,and can solve a lot of my problems, but at a huge cost. Same as Wyse. I've gone through four different versions of Wyse terminals, whilst I still have the same Sun Ray's that I had from six years ago, and they run fantastically.  You need to grow up and do your homework first before you bash things you know nothing about try to pass off on people that you are a "thin-client expert".

By the way, if Joe Shonk wants to use his Sun Ray's as door stops or frisbees please sent them my way. I can still get $75-100 on ebay for the old Sun Ray's that are over eight-nine years old. They still work perfectly fine for delivering Windows or Linux desktops. We've got them scattered all over our company.

Brian, seriously, have you taken a look at Sun Ray? I'm on board with Craig Bender. Is Sun Ray perfect? No, but it sure beats the embedded-OS chubby clients. Is it getting better? Absolutely. Expensive? come on, have you really done any cost/benefit analysis? Actually, you can usually do about 200 desktops per x64 server (eg. Sun x2270) which adds about $25 per desktop.

I'll join Craig to help you eval current vintage product. Just say when and where.

I am cillian from xtreaming technology.

The most attractive point is that is a high spec software,  Support Win7 already, let your investment safe. We also support client OS, including Windows XP/2003/Vista/2008/Win7 32/64bit/SUSE , also all the linux distribution 32/64.

It's a good chance for you to dominate the IT market demand. Please contact with me too.

How can you possibly classify yourself as this if you haven't even examined all avenues of desktop virtualization?  It is becoming very clear that you are not diverse in all products, but rather very opinionated and apparently close-minded to certain vendors.

Even I, someone who is not even a Sun advocate, know more about Sun Rays that you apparently do.

If you want to judge products, you should try them out first, or at least do the proper research.  Based on previous comments and your assessment of Sun Rays, you have not given a proper cause for your dislike of the product.  You're completely in the wrong and you did not support your argument.

Next time, try showing a valuable argument with supporting numbers.  Seems to me that you're just one of "those" guys who doesn't want to deviate from anything but what you are familiar with.