Oracle does not usually fall within our realm of coverage, but when there’s a 45,000-person conference just down the street, we certainly notice. (Plus they do actually have a VDI solution. :) Well... they inherited a VDI solution when they bought Sun. And of course VDI wasn’t mentioned in Larry Ellison’s keynote, but I couldn’t pass up the opportunity to see such an interesting person speak. This guy uses a handheld mic, he just says “next slide” instead of using a clicker, and on my way in I passed by a display of the actual America’s Cup trophy and a giant carbon fiber sailboat.

Continuing on with stuff that’s not related to us (but still really cool): Up on stage they had the newest versions of their big database appliance, Exadata, and their newest middleware machine, Exalogic. They introduced the SPARC SuperCluster, a big, powerfull all-in-one appliance, and Exalytics, their in-memory database analytics machine.

Anyway, back to VDI—why does Oracle do VDI? The short answer is because they can, and users that are already using Oracle and who also happen want VDI might as well put it with the rest of their Oracle stack. (Or so goes the thinking from Oracle.)

I got a better picture of Oracle’s virtualization and VDI offerings from a few sessions at OpenWorld. Senior VP of Linux and Virtualization Wim Coekaerts gave a presentation outlining Oracle’s complete virtualization offerings. He mostly covered server virtualization (once again, not really in our area, but getting closer) and their full suite of options (lots of Oracle VM templates, live migration, automated provisioning... everything that you’d expect). They do support Windows VMs, but naturally the offerings are richer when you’re running Oracle versions of Linux VMs.

Speaking of server virtualization, Oracle takes some jabs at VMware In this department. (You couldn’t miss the taxi ads in Las Vegas during VMworld): 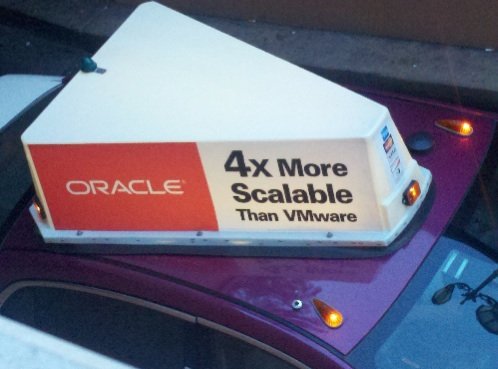 But I wonder -- if you’re not doing the Oracle thing, you're probably already using vSphere, so why would you go over to a company that goes on about its full integrated stack and software just for the purpose of server virtualization? (I’ll ask this same question in a second regarding Oracle VDI.)

Oracle’s VDI offerings were the subject of a session with Andy Hall, Director of Product Management at Oracle, responsible for VirtualBox and Virtual Desktop Client, and Dirk Grobling, Director of Oracle Virtual Desktop Engineering at Oracle. They’re Oracle’s main VDI people, and they were at BriForum London this past May. (Check out Oracle's DEMO Lab video from BriForum.)

The OracleWorld VDI session started off with a VirtualBox demo. It’s free, it will run anything on anything else, and in addition to being a Type 2 client hypervisor, it also serves as the hypervisor for Oracle’s VDI environment. (Yeah you read that right. Oracle uses Virtual Box as the hypervisor for their VDI solution. Maybe it's more geared to run desktop workloads than Oracle VM?)

Andy continued by bringing up Oracle’s full stack strategy—complete, open, and integrated (in their marketing speak)—for VDI. They do have all the pieces, but once again, I can’t imagine anyone who wasn’t already using Oracle products going for this. He addressed the question of “why?” by saying that Oracle does VDI because it can, and it’s right there for Oracle customers who need it. (And with no offline solution, we know that this is only for certain markets and situations.)

So I'm curious: Has anyone out there gone to Oracle for VDI without already being in their environment? If you’re already using a complete Oracle stack, it seems like it would be a good choice if you also need to deliver some desktops. But if your organization is not doing that, are you going to look at Oracle for the first time just because of their VDI?

Ha! Why does Oracle do VDI? Because they can! .. Love it!

It must have been the accent ;-)

We also said that putting together a VDI deployment is not trivial because you need storage and server hardware, virtualization software, a scalable broker to orchestrate the vm or user session, before you even consider  remote access and client choice. But fortunately there is one vendor that can provide all this, Hardware and Software Engineered to Work Together (as the man said).

And finally, Oracle customers can be reassured that all those Enterprise Apps they use today are certified for use on Oracle VDI too.

Hope this clears things up,

Thanks for the additional info from Oracle!

If taxi ads don't work, you can always only cert ur products on ur own hypervisors....  cough cough...

The two dots that you forgot to join up is that ALL the enterprise businesses have Oracle in one shape or another, most of them core.

For a VDI only solution it's quite limited. At least VMware's VDI solution comes with ThinApp...

After initially attending some webinars in the past, regardless on the progress I am personally not interested. But this is coming from an App Dev/Oracle DBA main role and a Virt enthusiast.

VDI only gets you so far...

KVM has been ported to SmartOS and Illuminos(sp?)... which are the free forks of what once was OpenSolaris... so I wonder if KVM is ever going to make it to Solaris proper?!?

Anyway... I'm assuming any desktop virt product they offer is based on VirtualBox.  Is that correct?  Do they have a type1 hypervisor flavor of VirtualBox yet?  If not, it seems strange to have a type2-based VDI product.  What's the name of this product?