Last week, I posted an article that breaks down my thoughts on OnLive Desktop, the desktop virtualization solution offered by cloud gaming provider OnLive. In the article and in the comments, we tried to figure out exactly how OnLive can deploy Windows 7 Enterprise desktops to users, and how that licensing is handled by Microsoft.

Without rehashing the entire discussion, OnLive was mum on how they've managed to license both Windows and Office in a way that enables them to deliver them to users either for free or for $9.99/mo. We went on to wonder if they could possibly have a situation where they were using valid VDA or SA licenses in a virtualization model, if they were using blade PC's, or if they had some custom arrangement with Microsoft.

Are they using VMware?

Then, over the weekend, a reader by the name of "lodani" (also on twitter as @LoDani) sent along this screen shot that shows elements of VMware exist in the OnLive file structure. 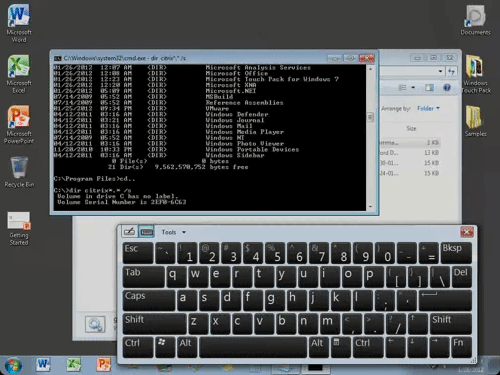 After digging around myself, I can't find anything other than empty subfolders underneath the C:\Program Files\VMware folder, so I'm guessing that the image was probably built on VMware Workstation, but then the bits were stripped out when it was deployed as a master image. In fact, with the slight amount of cruising the filesystem that I was able to do, I can't find any traces of other virtualization tools packages, so I'm thinking run-of-the-mill virtualization is out of the picture.

The custom hardware option seems to be more likely

What I did find while poking around, however, was a folder called Microsoft XNA. XNA is the core component of the Microsoft Game Studio, which aims to eliminate boilerplate code from Windows-based games to make them more efficient. To me, this leads me to believe that they may in fact be using blade PC's or other dedicated physical hardware to deliver these desktops. As mentioned in the other article, this also makes sense from a gaming perspective where the hardware requirements of these games are quite possibly more than virtualization can handle. It also jives with the fact that OnLive can leverage otherwise unused hardware during the day when gaming subsides, then ramp up the gaming again during the evening when the need peaks.

Keep in mind, too, that they could still be taking advantage VDI-like efficiencies, like on the fly disk streaming, rapid provisioning, single image management, and all the things that we commonly associate with virtualization, just without the virtualization aspect.

We keep getting nowhere with licensing

Dedicated hardware or not, I'm hearing murmurs that there is something custom going on between OnLive and Microsoft. Nobody is coming out and saying as much, but between conversations with some folks with a bit of inside knowledge and with Microsoft, we can start to see where the fog is coming from, even though we can't see through it. Questions directed at Microsoft were answered by saying they can't talk about specific customer's licensing. We got an equal amount of nothingness when asking about how we would go about building a similar situation on our own, though, which is odd.

Could OnLive be an acquisition target for Microsoft?

I thought it was odd that we couldn't get an answer out of Microsoft when positing a similar scenario, especially since you'd think Microsoft would want to encourage more Windows 7 adoption. Perhaps they're too focused on Windows 8 tablets, but running Windows on an iPad can't be too much of a turnoff.

Then I remembered Brian's article from last year in which he relays a conversation between him and Benny Tritsch about Microsoft's unspoken plans to use RemoteFX to deliver desktops, applications, and--gasp!--Xbox games from Azure.

Of course, this is uncannily similar to what OnLive is currently doing, minus the protocol and, perhaps, the virtualization. Still, with desktops and games from the cloud, each using the same protocol, and delivered from regional data centers around the world, I see some overlap. I wonder if Microsoft is working something custom with OnLive, and if this is kind of an experiment to see if it will work before bringing the into the fold. It could also explain the fuzzy logic around the Microsoft licensing.

One last thing about an acquisition that might be interesting - OnLive CEO Steve Perlman has already sold something to Microsoft once: WebTV. Not that it ever took off, but it does show that the relationships could still exist and that, this time, each company's offering could be on the same trajectory.

Let me just say how F'ing pissed off I am at Microsoft about this. I am an MVP, and I asked my MVP contact people how in the world OnLive could be legally licensing this, and they said, "We can't comment on how customers might be doing this, and we can't speculate."

Ok, fair enough. So then I asked them, "Ok, forget OnLive. Can you please get me in touch with a licensing expert at Microsoft who can explain how I would set up my own DaaS offering based on Win7 enterprise? I want it to be free, or $9.99 per month. But I don't want customers to have to own their own Win7, VDA, or SA. I want to provide everything as a provider. I'd be interested in exploring this offering for both physical and virtual hosts. Please tell me which Win7 licenses I have to buy in order to do this?"

And their response? Nothing! Not a goddamned thing!! I've been an MVP for 8 f'ing years, and I can't even get those assholes to answer a single simple question. F them. I'm so over the MVP program and Microsoft in general. Windows and their stupid licensing monopoly world can't die soon enough.

Definately insider dealings going on between Redmond and Onlive.

The crazy thing is, Microsoft are snubbing the massive market of resellers who driving thier income by outright refusing to provide SKU's that enable this. The market for DaaS is ready to boom - and the ONLY thing stopping it is Microsofts medievel licensing. The technology is there, the business case is there, the delivery expertise is there.

I'd be interested to hear what the EU monopolies commission or similair would think about this kind of business practice. Basically - Microsoft are actively preventing companies from offering a competing service by artifically controlling the usage of thier industry standard product via a non-technically impeded, licence only restriction, seemingly in order to promote a single preferred vendor? Good luck defending that if it ever went to a monopolise commision hearing.

I just dont get it.

OK, here's a theory on how the licensing might work.

For Windows remember that they run games on the Windows platform for the gaming side of their business and there is no standard Microsoft license to allow them to do that, so they must have negotiated a special deal with Microsoft. It makes perfect sense for Microsoft to work out a deal that works economically for the game side of the business (so long as they didn't consider them too much of a competitor for their own gaming platform). Given that there are so few companies doing what OnLive is doing and also considering that there is no way to do it on a small scale, it makes perfect sense for Microsoft to keep this as a custom deal rather than enable that particular model in their standard licensing line-up.,

Now it is possible that Microsoft never considered that OnLive might offer a remote desktop when they drafted this deal and so never excluded that usage in the terms of the deal. If so then that's OnLive's Windows licensing covered, potentially at zero cost because they probably already have to pay for gaming. It seems unlikely that Microsoft would make such an omission, but it is possible and it would certainly explain why neither side will talk about it. Also if that is the case then it is a pretty gutsy move by OnLive when it might put Microsoft offside with respect to licensing, so if they have done it they had better have a pretty long-term deal for Windows for the gaming side of their business.

Office could just be licensed under a standard SPLA agreement. I'm not sure how they would make the economics work in this case, especially for the free desktops, but at least it is possible to do. Maybe they don't expect to make a profit out of these services, but rather just use them as a marketing opportunity to bring people in to their gaming platform.

All just speculation - I've go no idea if that's what is actually happening and I'm probably wrong, but it is the only explanation that I can come up with that makes any sense.

The most frustrating part of all is the unwillingness to disclose how this is being offered.

Living every day in the cloud hosted desktop world, I know that the only way they can offer a cloud  Windows 7 desktop is to use dedicated hardware.  Sometimes I get the "desktop not available" message from my iPad with OnLive, so maybe this is what they are doing?  However,if that is the case, why don't they just come out and say that?  Wouldn't OnLive (if not Microsoft) want the market to know that they are in compliance?

Random thoughts:  VMware tools is running along with other vm related processes and the hardware devices match VMware. OL could be using VMware because it allows the interaction between the host and VM through the VMCI interface (intervisor?)

OL code was written by former MS engineers and the potential acquisition of OL could be very similar to the buyout of Calista in 2008 to bring Hyper-V back on track.  I could see the same thing happening with OL since they are enhancing cloud desktop technologies for: multi-touch drivers, KMS optimization, application-whitelisting improvements, data sync, GPU passthrough.

The MS goal would be to have end-users running apps and games designed for the MS platform over native iOS and Android code.  SkunkWorks style..

is the the ownership structure? Warner Bros and Maverick Capital and the developer of QuickTime Steve Perlman,

in my opinion its a proof of concept for a full MS subscription service, get home users hoooked so they want it at work... I smell corporate package "deals" coming