I was impressed when Citrix said they’d created a mouse that worked in conjunction with Citrix Receiver R1, which makes the horrible use case of Windows apps on mobile devices a thing of the past (ok, at least in some situations), but to be honest I didn’t expect to be as blown away as I am when using it. This thing is really, really great!

First, it’s easy to start using. When you get your hands on one, you’ll have to download the R1 receiver, which is not found when searching for Citrix Receiver in the App Store. I think they’ve purposely made it obscure by simply calling it R1. Once you get R1, though, there’s simple a button to pair the mouse in the app and on the mouse itself.

Actually using it, though, is really impressive, but I can’t figure out why. I know how Excel works. I know how a mouse works. There’s nothing new about using a mouse with a Windows app at all. But there’s something about using Excel on an iPad with a mouse that feels “freeing.” I actually could see getting a keyboard case for my iPad and bringing the mouse with me as a primary device! 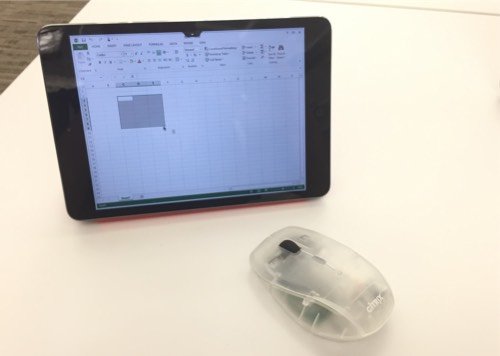 Since this is all in a beta state right now (the mouse even says "Prototype" on it), there are a few kinks. The mouse tracking and acceleration could use some tweaking for my tastes, though by and large it seems ok. I also let Jack have a go to see what his experience was. He had more issues than I did, but it’s a personal preference thing that even he worked around after a moment. There’s no settings exposed via the R1 receiver yet, but I expect to see them when it is released. I’d also like to see a way to change the scroll direction since I’m a Mac user and have re-trained my brain for “natural” scrolling.

It also hasn’t been fully baked into the UI, so there are some things that look like they can be clicked on even though they can’t (basically anything in the locally-rendered UI). For instance, you see a mouse cursor on the Receiver R1 home screen, but you can’t click on anything. Again, though, these are small gripes that should all be worked out by Synergy.

Bottom line: I’m really excited about this, and I can’t wait to see the final product at Synergy and to learn more about how it works. (Word on the street is that they'll be handing them out again.) I think that it’s going to be very well received by the community and by our users. Of course, I wish that Citrix didn't have to spend time doing this and that Apple would just allow Bluetooth mice, but until that happens it's good to know that we have this option (and that it works well). Perhaps this will light a fire under Apple, but if it doesn't, Citrix will have a definite advantage when it comes to the mobile user experience.

One of the things we are looking forward to with the Citrix mouse is making mobile working a lot easier. To see what we mean, we made a short video, as that is by far the best way to see how this can really change a lot of things for a whole lot of iPad users. https://youtu.be/ZbvCYknxCXc

Together with ThinPrint Mobile Print you can print a document from your Citrix session on the iPad. Simply print any document you want with any local, AirPrint-enabled printers accessible via Wi-Fi. www.thinprint.com/mobileprint

Hi Gabe, Great to hear you had the same sentation. It's the reason we have developed our solution and tried to fund it through Kickstarter.

Just got my Citrix X1 Mouse today.  The first thing I noticed was how quickly this thing pairs with my iPad.  It showed up like right away and I've got a drawl full of BT mice and this thing paired quickly.

Once I updated Receiver to the latest version.  I noticed a setting to enable X1 Mouse and have Left hand mode option too.  At 1st I couldn't figure out why the Mouse wasn't working since I don't see any pointer at all.  Then I launched my Xendesktop from Receiver I noticed the pointer showed up.  It felt like a netbook with the mouse and my BT keyboard.  I think this is a good accessory to have for people who really hate laptops and can use this form factor.   The mouse is very well made, it is very comfortable in the hand.  Much better than the recent Microsoft BT ergo mouse I've used.