Citrix Synergy 2013 is taking place in Los Angeles this week. One of the most talked-about demos from the opening keynote was from NVIDIA where they showed GPU-powered Windows desktop applications delivered via HDX, including live photo editing, video editing, and 3D mapping. We've written quite a bit about NVIDIA in the past year, including reviewing the announcement of their GRID K1 and K2 GPU server cards. (I also mentioned that the release of these cards signifies a major breakthrough in the general usability of VDI.)

Gabe was able to spend some time with NVIDIA's Will Wade at Synergy and recorded some interesting conversations. Key takeaways include:

Here's a quick video of Gabe getting an overview. (Video link opens a new page because I don't know how to embed more than one video per post.) 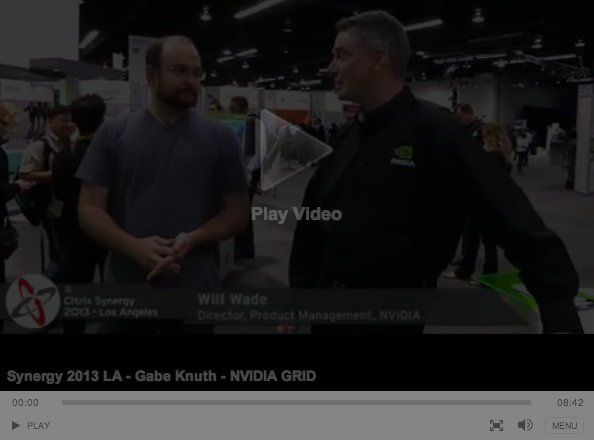 Gabe and Will also discussed graphics and GPU acceleration for XenApp. Gabe opened the conversation with, "We've been talking about this for years. We've seen this Sea-Doo demo a hundred times. So why are you showing that here? What's actually new?"

Will answered by showing a side-by-side of the old Sea-Doo demo with what they can do today. Basically the old version looked laughably cartoonish. The GPU-powered demo had full 3D shading, lighting, shadows, etc. All of this was powered from XenApp. If you want to use a GPU or GRID with XenApp, that's no problem. The GPU sharing works the same, with most people choosing to dedicate a GPU to the XenApp VM which in turn shares it as needed with each user session.

Here's the conversation between Gabe and Will as they discuss GPUs in XenApp: 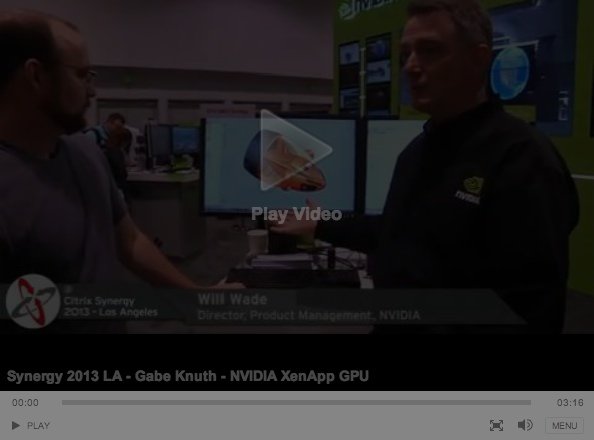 Finally, Gabe and Will move to the white board as will shows how he explains just what the heck is going on with XenApp, XenDesktop, XenDesktop App Edition, virtual GPUs, GPU pass-through, hypervisors, etc.

In terms of support, they can do dedicated GPU pass-through (one GPU per VM) on both VMware vSphere and Citrix XenServer. At this time the virtual GPU "slicing and sharing" is only available on XenServer, though Will reminded us that "this is Synergy," and that "as soon as those guys announce, we'll talk about it." So we can assume that GPU virtualization is coming to vSphere, and possibly to Hyper-V. 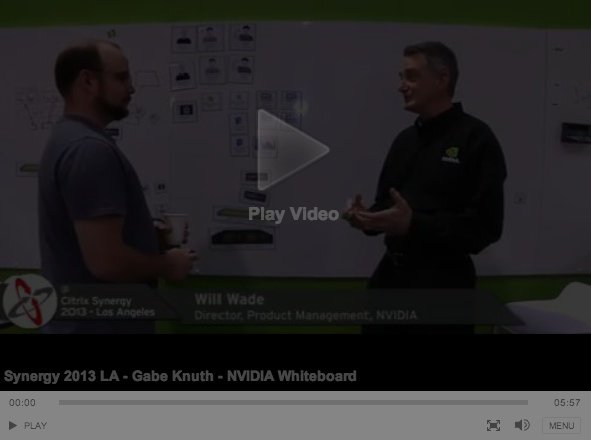 So what do you think? Are these as cool as we think they are? Do you agree that adding NVIDIA GRID cards to Citrix-based VDI servers should be a requirement for everyone?

Great to see, thanks Gabe & Will.

I have noted that the user count is slightly down from initial projections of 100 users for the K1. I assume this is based on wanting to deliver a better user experience via allowing more resources.

I'm curious if NVIDIA will license the h264 remoting separately for VDI or will this be only available on Gaming Grids?

This is really exciting technology.

I'm hoping that Microsoft and VMware follow suite ASAP and also that they (and Citrix) don't make it full stack dependent.

What I don't want to see is GPU virtualization only working with:

Because most of our deployments and customer want to do XenDesktop and HDX on vSphere or Hyper-V.

User count of 100 was achieved last year with RemoteFX.  That is the "up to" number.  We don't expect many deployments like this.

The first implementation of our GRID vGPU technology will support up to 8 users per physical GPU,  which equals 32 users on our quad GPU GRID K1 board (Servers typically support two boards, so 64 users per server).  Future versions of vGPU will support higher scalability with just a software update, but we want to make sure it's working at this level first.

We are working to get our hardware H.264 encoder built into the remoting protocols.  Although not ready for Synergy this week, stay tuned for future announcements.

Rob - We too would love to support mixed stacks.  Just need HyperV and vSphere to support vGPU.  Would you call them for us and ask?

FYI Dell PE 720 allows only 1 K1 GPU to be installed/server.  You can put 2 K2 GPUs/server in a 720 however. At least this is what I got from their system builder site.

Thanks for the clarification Will.

Matt - The Dell config tool is broken.  The R720 will support two K1's or K2's.  You just need to call them and ask for that config.

Does this mean I can get aero support in xenapp on windows 2008r2 ? Never understood why you can get aero on win2008r2 RDS/RPD but not with Citrix xenapp.

Also is HP selling these with their Prolient line? I cant find anything on HPs site.

Over a year ago at CES 2012, NVIDIA CEO Jen-Hsun showcased remote 3D gaming using Splashtop...... a professional gamer was invited on stage to use an NVIDIA Tegra tablet to remote play Skyrim running on a GeForce optimized PCs.   For years, Splashtop has been optimized for both GeForce GPU and mobile Tegra hardware acceleration, capable of running at 60+ fps and < 30ms latency!

Millions of users are already use Splashtop Remote Desktop from their iOS, Android, Windows, MAC, Blackberry, Win Phone 8, WinRT, etc. to remote to their GeForce PCs to deliver remote 3D gaming or run AutoCAD, Adobe Premier, or any apps / content... turning PCs into personal cloud.   This is the ultimate "distributed GPU VDI" that scales.

Essentially, what's happening here is that NVIDIA is commoditizing GPU-accelerated VDI.   Just interface with NVIDIA middleware and driver on GRID or workstations to deliver awesome remote graphics experience.  To deliver a solution for businesses, the needed additional investment is around having the broadest range of device support (so BYOD is possible)... and having a management console that integrate with Active Directory, audit trails, policy manager, etc..

We are making sizable investment to make it simple, easy, and affordable for any business to adopt GPU-VDI... distributed workstations or centralized GRID.

We done the GPU passthrough in xenserver 6.1.We deliuvered some windows 7 machines using xendesktop 5.6 which is working fine.

But when we launch the GPU enabled windows 7 machine the desktop background colour becomes completely black and the screen resolution is not able to change.

We tried with diffrent user accounts and verified this problem is happening only with GPU enabled machine ,Other machines are working normally.