This past June, NComputing launched their oneSpace product which brings together Windows applications, file services, and touch-based clients in a solution that can be deployed on-premises, in the cloud, or in a hybrid way bridging both.

After looking at their stuff off-and-off for the past six months, I realized that my conception of them as a cheap thin client maker for third world countries and educational institutions isn't really accurate anymore. Furthermore, the oneSpace solution that they're selling today actually delivers on a lot of what Citrix, VMware, and Microsoft are promising to deliver in the future.

When I think of NComputing, I think back to my first impressions of them from maybe seven years ago when they had a solution that would slice a workstation up into multiple sessions which could be remoted to local thin clients. ("Local" in the sense they didn't even use a network—they were just all connected to a card in the host PC.) Apart from still requiring TS CALs, it was dead simple. A school teacher or small business owner could hook up everything in a few hours.

Since then they've branched out into more traditional thin clients which connect to their vSpace software—similar to Remote Desktop, it slices a Windows or Linux server into multiple sessions—and they've sold 5 million of the things since. (What's most interesting about this is that except for the 100k HDX thin clients they sold, every single one of their thin clients uses their UXP remoting protocol to connect to their own host.)

That said, they still flourished in the SMB and educational spaces, mainly because their products are inexpensive (the $150 thin client price includes the vSpace license), and can be installed by part time non-IT experts.

So that's NComputing. They've been chugging along under the radar (well, under my radar at least since I only really focus on enterprise stuff), until early this year when I first tried out oneSpace.

OneSpace, if you're not familiar with it, extends vSpace to tablets, aggregates file sync & share (Dropbox, Box, Google Drive, OneDrive, SMB file shares, etc.), and connects users to their internal and external web apps. The whole thing is powered by vSpace on the backend. (So, technically speaking, oneSpace is vSpace for Windows and Linux app remoting, plus the file and website access.)

Using oneSpace is pretty straightforward. You log in from your tablet (or Windows desktop) and you have icons for all your apps as well as access to all your files. You can click a file to open it in the remote desktop app (delivered via UXP to your client), or you can long-press to open it locally on your device. It's got all the expected options... clipboard integration, gesture support, etc.

The file integration is pretty great since NComputing doesn't have a horse that race. In other words their not trying to shove some second-rate file sharing solution down your throat, and classic SMB file shares are "first class" citizens in their environment as much as cloud-based solutions like Dropbox are. There's even a universal search that lets you search for files across all your sources. 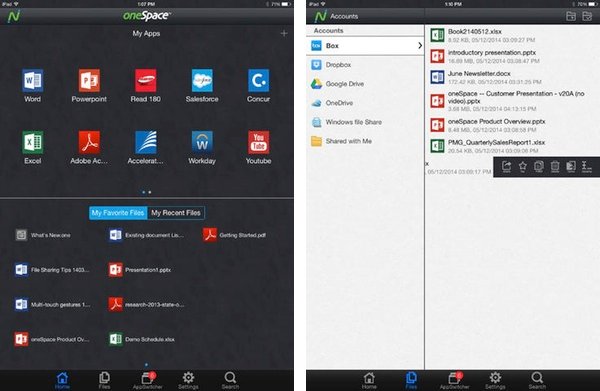 On the backend, NComputing offers oneSpace as a service (available through DaaS providers), or you can buy the software and install it completely on-premises. They also support a hybrid model where you can have all connection and sync servers in the cloud while keeping the vSpace desktop session servers and your SMB shares on site (or a combination of some in either location).

Looking ahead, NComputing is getting ready to launch an HTML5 client as well as some light UI transformation to hook the local clients' form pickers and stuff. They're also hooking into the various devices' capabilities to restrict camera access and screenshots while using their apps.

What's this mean for NComputing?

Here's the thing about oneSpace that's interesting to me. It just works. When I first saw it in February, I used it for about 5 minutes and then didn't touch it. Why? Because it works. Yeah, there are my apps. Yeah, there are my files. Yeah, there are my web pages. Even for an on-prem setup the whole thing is up and running in a few hours and I didn't have to build a dozen different servers or setup a VPN or anything.

I kind of view what NComputing is doing with oneSpace in the same way that I viewed MetaFrame 15 years ago—it's a point solution you can install to deal with problem apps. Nothing more, nothing less. The difference is that "problem apps" of 15 years ago were fat client-server Windows apps, and the problem apps of today are tablets.

I mean literally, users walk in today and say, "figure out how we can use our tablets," and so far we've seen that spending 6-12 months to design a VDI solution is expensive, complex, and doesn't really solve the tablet problem. I think oneSpace could be that solution.

Same goes for EMM. Today's EMM doesn't really "solve" mobility. Yeah, they can get your users onboard in an easy way, and they can give you the ability to remote wipe your devices, but what problems do they solve really? Even after EMM you still have a boatload of desktop apps you need to get out to your users, and this is something that oneSpace can solve. (I'm not saying that oneSpace is an EMM product or that they even play in that market, but I can definitely see oneSpace solving some of the problems that people are trying to solve with EMM.)

Long story short, this thing has promise. I don't expect that all the enterprises of the world are going to go out and dump Citrix or VMware tomorrow, but if you need a simple way to deliver apps and files to your tablet users, why not just spend an extra 10% and get oneSpace too? They charge $129 per named user /$179 concurrent to buy the product (oneSpace + vSpace) outright, or $69 named / $99 concurrent per year for the annual subscription. You can buy it completely hosted for somewhere in the $30-$50 per user per month range. Thin clients (for desktop access) are 9 bucks a month. (That's the hardware cost for the thin client lease.) They only have one edition. ("All editions are platinum," their CEO told me.)

I dunno. In a world of ever-increasing complexity of Citrix, Microsoft, and VMware, there's something simple about oneSpace that I like.

You know, I actually see a lot of similarities between this and Workspot, with the whole concept of "get your documents, web apps, and remote desktops all together, quickly and simply"

How easy is it to use when it comes to things like VPN setup? Or any SSO / federation stuff built in? And can you access this all from a desktop browser? (Or desktop client?)