Today Microsoft released a beta version of the RDP v6 client for Mac OSX. (Available via Microsoft Connect.) It follows the Mac version trail and is being called the “Microsoft Remote Desktop Connection Client for Mac 2.0,” but it's built around Version 6 of the RDP protocol used by Vista and Windows Server 2008.

I was really excited when I first heard about this beta. RDP 6 and Windows Server 2008 have all sorts of great features (TS SSL-VPN Gateway, seamless windows, Network Level Authentication, etc.), and I assumed that supporting these was the reason for this new Mac client. Unfortunately after I downloaded the new Mac RDC v2 beta client, I realized that none of these features made it in. In fact apart from a general modernization (downloaded via a DMG file, universal binary), I'm not really sure what the big deal is about this client?

I mean sure, this new RDC client definitely “feels” more like a genuine Mac application. The preferences of the connection are now controlled via the “Preferences” menu item. It's a universal binary. It looks pretty. But it doesn't do the new cool Windows Server 2008 stuff I was hoping it would.

For example, according to the Read Me, this client supports “dynamic screen resizing,” which is described as the ability to resize your session window (from window mode to full screen) via the view menu. Cool! Unfortunately this feature only resizes your client window--not your actual session. So if you have an 800x600 session open in a window on your desktop and you switch to full screen mode, it simply stretches the existing 800x600 session to cover your entire desktop.

This new client also now supports multiple sessions. In the previous RDC Mac client, if you had an RDP connection open, clicking on the RDC software icon would not open another instance of the RDC client--it would just sit there and do nothing. In order to open a second simultaneous RDP session with another server, you had to download this free utility called “RDC Launcher,” which was, as its name implies, a little utility that could launch multiple side-by-side instances of the RDC client.

This new Mac v2 RDP client officially supports multiple sessions. However, the way it does it is really weird. Instead of just letting you launch multiple instances of the client, or instead of simply adding a “new connection” menu item, you can only launch multiple sessions by clicking on an .RDP connection file. The idea is that you make a folder full of connection files and then just double-click on each one as needed.

For me this is not too useful. Frankly I'm just not that organized. I just want a simple way to launch multiple connections. Fortunately there's a workaround the seems to be fine enough. You can double-click the same .RDP connection file over and over to launch multiple instances of the client. 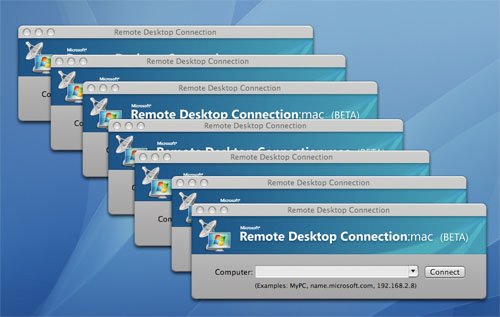 So in my case I just configured the preferences as I wanted them via the RDC Preferences menu, saved an .RDP connection file (via the File menu), and then put that RDP file in my dock. So now instead of launching the Remote Desktop Connection application (which can only launch once), I just click on my .RDP file to fire up a new instance of the RDC client.

The bottom line is that while this client is cooler than the old one, it's still not nearly as cool as it could be. I think it's something that came straight out of the Mac group at Microsoft because they wanted a better client. I don't think this came out of the Terminal Server team's desire to deliver sessions to non-Windows clients.

Is anyone else using this client yet? Have you gotten it to work with seamless windows or any of the other advanced Windows 2008 Terminal Server features?

CCaronan - 17 Aug 2007 11:48 AM
I have the same issue. My work is going to use TS Gateway but unfortunately I will not be able to use my Macs. I would have been great to use my Mac to connect to the Win PC at work. So, as far as useful... it's just going to be more Microsoft software that I will remove from my Mac... because it's of no use to me.
[-]

CCaronan - 30 Aug 2007 5:30 AM
Would be great if they offered a command line connection mode like windows instead of having to have a .rdp file for each connection.  Seems that the .app only like a path for the .rdp file.
[-]

CCaronan - 18 Oct 2007 4:04 AM
...Is the fact that the client does not even support TLS/SSL encryption for Terminal Server sessions. If you want to support Mac clients you will be stuck using RDP-native encryption, which is /seriously/ weak. It is this kind of lack-luster Mac suppor that pushes people to use Citrix (not that MS is out to destroy Citrix... I wish they were, then we might see some real innovation in Terminal Services).
[-]

CCaronan - 24 Oct 2007 6:36 AM
I've noticed far better printing to any older AppleTalk (go ahead and shutter) pirnters, USB attached printer mapping.
Further, I can now remote control about 97% of the remote users I deal with on a daily basis. The prior client crapped out and would no longer allow remote control. I've not been able to get audio to map over on a 64 bit 2003 server but can on non 64 bit servers.
[-]

There is a huge momory leak in this app.  I have had it open for half a day and it is taing over 1GB of real memory and over 2GB of Virtual Memory.....

Hope they fix that when the product is released.

So the last comment was November last year, does anyone know whether MS plan to incorporate TS Gateway and Web Access support into a newer release of the client?  It seems time has passed and nothing, which is a real shame.