Microsoft has been busy, apparently. This week, they announced betas of both App-V 5 and something new--UE-V (presumably meaning User Environment Virtualization, but I'm no scholar). You've probably read most of the articles that were passed around twitter (there were four or five that everyone seemingly linked to), and the details from Microsoft were pretty limited. Still, between those articles and some from Helge Klein and Marius Sandbu, we can put together a decent picture of how this will be used. Then we can apply that to the industry and guess how things will shake down. If you already know how it works, you can skip the the "Breaking it down" section.

UE-V can be looked at as a replacement to Windows profiles in its simplest form. Instead of saving off the entire user profile to a file share, UE-V works by reading application-specific files that specify the file and registry locations where settings and personalizations are saved. These files are called templates, and they are XML-based. 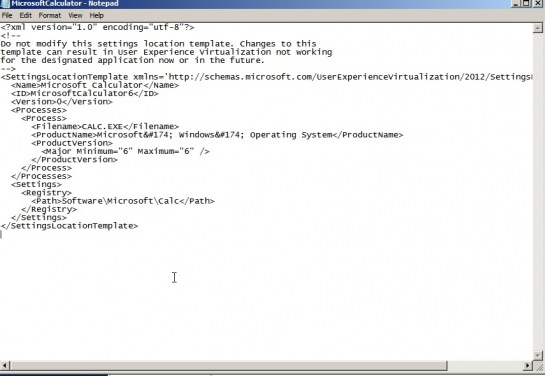 These template files only point to files and registry settings that pertain to personalization, not user data. Microsoft assumes you're using folder redirection for that (and you are, I hope), so you should be good to go in that area. Also, only settings that are stored in the profile (C:\Users\<UserName>) are saved.

Without a template, the settings stay put, unlike roaming profiles which sync everything. To enable sync, you need to create a template. The idea is that you create a template for each application, which is then deployed with the application so that the user environment is bundled with the app. This is more of a figurative process, but the end result is that no matter what OS a user uses, or how the app is delivered (local, TS, VDI, App-V), they still get their applications-specific personalizations. Holy modularity!

Of course, you can create your own templates, too. If you're the kind of guy who wears black t-shirts with nerdy code strings written on them, you'll probably just write the XML yourself after spending some quality time with ProcMon. But, if you're more into the easy, GUI approach, Microsoft created a tool that does the dirty work for you.

The tool, called Generator, allows you simply point it to the executable and give it a location to save the XML file. It then launches the app, watches for reads and writes to the file system and registry, and writes that information to the XML file. Helge notes in his writeup that it is still necessary to edit the auto-created file in many situations. So, good for Microsoft for including this, but it sounds like it gets crapped up like HTML docs written in Word :)

One last thing to note about these templates is that they are loaded with the application, and updated when the app is closed (or, presumably, other triggers are fired). That means you don't have to wait for logoff for the settings to be saved, and it means that updates happen more often and are less prone to unfortunate overwrites in the event of multiple instances being open at the same time. Templates and app settings are stored in a file share, but I couldn't find how they are deployed (I'm assuming group policy object).

So what does this mean for the rest of the world, like AppSense, RES, Immidio, triCerat, Scense, and all the others? Their tech is more advanced, but UE-V will work for many organizations that just need something a little better than roaming profiles. Is it a threat to AppSense, RES, and the others? Probably, but not as much as you might think. In fact, it will probably drive them to innovate and branch out of Windows a bit. This seems closest to Flex Profiles, so Immidio can feel the heat, but there's still a gap in functionality that they can take advantage of for the time being.

Many third-party solutions are still aiming to help migrate from Windows XP, too. UE-V doesn't help with that, since XP isn't supported. Come to think of it, though, you don't need to migrate to the new profiles now, all you have to do is migrate to UE-V, so maybe that will cause a problem? UE-V also doesn't help migrate applications. The settings aren't portable between app versions, so there are still lots of use cases for other platforms.

There's also the issue of MDOP. Since UE-V is included as part of MDOP, those that subscribe have a more cut and dry decision to make. Those that don't have to weigh in the cost of MDOP and SA (because MDOP is only available to SA subscribers) and decide whether or not it makes sense. Some look at UE-V as free, but let's call it free-i$h. Because of that, there will still be customers looking for third party solutions.

The bottom line is that I don't think many companies are going to go belly up because of this…at least not in the short term. According to an email from RES Software sent Thursday morning, this wasn't a surprise to them, and is the reason that they released a free version of Workspace Manager (Workspace Manager Express) last year. RES goes on to say that they are in a better place than other vendors and that their roadmap "remains unchanged."  I'd imagine that the big players can all say something to this effect. Also in the email is that RES has plans to build upon UE-V, which is pretty much what everyone will do, because why bother reinventing the wheel (well...again).

I think this will ultimately be good for everyone, customers and ISV's. The customers get a much needed feature built into the core of the OS (more or less), and the ISV's get a fire lit under them to branch out and devote resources to other, more cutting edge solutions like solutions that take personalization beyond Windows and into the cloud (many have already started to do that).

Last, but not least: Where can Microsoft go with this? If Windows on ARM isn't supported, that may be the next logical step, but I have to wonder about the use case. The more I think about it, the less I think that will happen soon. Since the apps are different, and the interface is Metro by default, maybe there's no point. The next step may, in fact, be to make application settings portable to the cloud. Imagine having your Office settings on your desktop work with Office 365. It's not hard to picture them going in that direction.

That's what I like about this. It frees up companies to shift more focus towards new technologies rather than on trying to fix a problem Microsoft should have addressed ten years ago. That will ultimately be good for both customers and ISVs.