We will be releasing a survey so that you can help with this process in the next few days, and the announcement of the accepted sessions will be made some time next week.

I was in San Francisco last week hanging with Brian, Jack and Dr. Benny Tritsch. We had a great time over the weekend (check out all their tweets @JackMadden, @BrianMadden and @drtritsch to get an idea of the fun).

Monday I tagged along to work with Brian to see what his day is like. We took the train into the city to the TechTarget offices. On the train Brian received a text from Gabe to get a status of where Brian was with the BriForum submissions. “Hey,” Brian asked me, “Want to sit in on the selection process?”

Some of you may have been like me and assumed that Brian and Gabe just picked their cronies to deliver the BriForum sessions. That is not entirely true.

Okay…. Confession time. I got this impression because BriForum “holds” some slots open for its best presenters. Last year for the London BriForum Gabe called me and said, “Hey, #$%#@!, are you going to get around to submitting a session? We’re holding one open for you.” If a presenter’s previous sessions have ranked high, Brian and Gabe look forward to having that person present again.

But otherwise after sitting through it I was shocked to find out that it is a methodical process that ensures that only the best sessions and/or presenters  (or “#$%#@!’s” in my case) that make the final cut.  Both Brian and Gabe are thrilled when a newcomer’s session makes the final cut in order to get some “new blood” into the conference.

It was fun to be a fly on the wall, plus I had an ulterior motive: now that I don’t work for a vendor I am interested in attending sessions this year. Therefore, I felt like I had a vested interest in which sessions were chosen.

Session proposals all end up in a spreadsheet. The columns in the spreadsheet correspond to the questions in the session proposal survey with one exception: Gabe has a macro that hides the columns that have identifying information. So when Brian and Gabe look at the session titles and descriptions they don’t know the identity of the presenter. The responses to the survey that you answered also end up in a spreadsheet. Gabe and Brian look through the spreadsheet and based solely upon titles and descriptions decide yes, no, or maybe. Brian and Gabe each do this individually. Gabe combines the answers and the spreadsheet gains the following tabs: “In”, “Almost”, “3s”,”4s”,”5s” and a curious looking tab called “pre-denied”.

An interesting side note: to keep from having to refer back to the spreadsheet Brian used his own printer to print out the spreadsheet and then used scissors to cut each session into its own strip: 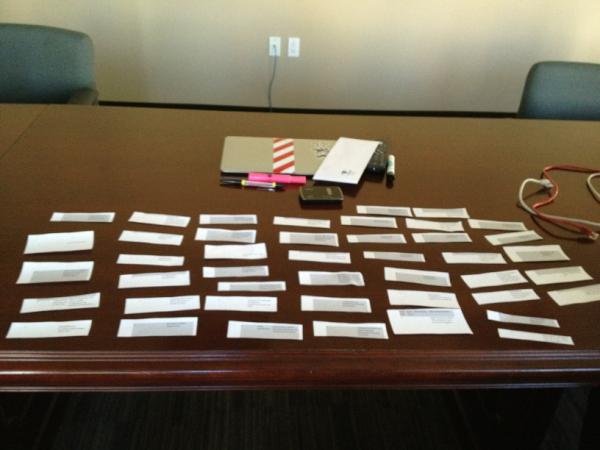 In the spreadsheet the “In” tab contained the sessions that were considered slam-dunks (for you non-basketball fans these are sessions that are obvious to both Brian and Gabe that they will be selected). For example, “Brian’s untitled session” is in this tab. Brian knows that he will be presenting but has not narrowed down what the topic is. If pressed he could probably enumerate a half dozen or so potential topics. His ultimate decision will be based upon what other sessions will be selected. If after looking at the entire session list he feels that BriForum is weak in a certain area he’ll speak on that topic. Jack also had a session in this tab (“Jack’s untitled session”) Since Brian knows that Jack will handle a “consumerization of IT” session this gives him the freedom to handle the latest hot topic or trend that attendees have questions or want to learn about.

In the “Almost” tab are sessions that look enticing but either Brian or Gabe feel that they need to know more about the session (or to discuss it between each other) to make a decision. One of the columns is for comments and I noticed a distinct trend. When voting tabulating the results of the reader survey the most frequent response in the comments sections was something along the lines of “I’d attend this session if it is from a real-world IT person.” Or, “Not if this is from some vendor.” The community has spoken and it is clear that you do not want a vendor telling you what to do – instead you want to hear from someone who has real world experience.

There was one session in the “Pre-denied” tab. Apparently the marketing department of a vendor I won’t name sent in a session for their company bigwig to present. Brian indicated that this happens every year. Even though the submission guidelines clearly state no marketing fluff some vendors try to sneak in thinly disguised marketing presentations for their products. “Pre-denied” means Brian doesn’t even consider the session nor look at the topic (unless it is for morbid curiosity sake)

At this point Brian felt like he had enough great topics to make another top-notch BriForum. But after counting the sessions they noticed there were more sessions than slots available. Bummer. I lobbied for and extra day being added to BriForum, but that suggestion was quickly scoffed at (maybe next year). Unfortunately, this meant that they would have to further whittle down the sessions.

Jack went into the spreadsheet and un-hid the identifying information and they went through the list again.

I heard more curse words in the next twenty minutes than I would all day.  Most of it centered around, “@!#@%^” the presentation is from the vendor that sells this kind of stuff. If the submitter had previously presented then Jack would access records to determine attendance/scores from previous year(s).

Some sessions are so intriguing that it seems neither Brian nor Gabe can pass them up. But there are only so many slots available. Other sessions look cool but the team doubts there is a full session’s worth of content. That is why they created the Lightning Round. The lightning round is 15 minutes, and they do several of them inside of one session "slot" during the show.

What if your session wasn’t chosen?

There are a variety of reasons why your submission may have not made the cut:

Too many similar submissions of a particular topic.

App-V is important to many of you, but BriForum is not an App-V conference. So a couple of really good App-V presentations had to be cut.

BriForum is about the variety of ways to deliver desktops to users. While it may be interesting if your topic isn’t about delivering desktops it probably got cut.

If your topic was about a particular feature of a particular product the team often felt it wouldn’t attract a wide enough audience.

You are a vendor

See you in Chicago, assuming I get selected!

Just a bit more on that "pre-denied" tab.. These are the session submissions that we get that just flat-out did not follow the rules. One rule is "You must submit your own session." But you won't believe how many session submissions come in with the name as the CEO of a small vendor, but then for the email address it's someone else's name at a PR agency. #FAIL There's your pre-denial. :)

Also we state things like "all sessions are 75 minutes." And then you'll read a description where someone says they want to do a 30min session. #FAIL Pre-denied!