One of the main objectives of enterprise mobility management technology is to keep corporate data from leaking into users' personal apps. A few years ago a lot of people (including myself) were calling this "Dual Persona."

The problem is that dual persona had a lot of bad connotations. It would bring to mind alternate sandboxed email clients for iPhones, which were severely limited by the fact that prior to iOS 7, iOS wouldn't allow third-party email clients to download full messages and attachments in the background. On Android, dual persona brought to mind special phones with completely separate user environments—one personal, one corporate—that felt like having two phones in one.

Some people love having a completely different experience—when "work" is separated it makes it easier to check out on evenings and weekends—but others hate it when things are mismatched.

Today the need to protect corporate data is still as present as ever, but in the last year or so, I've barely heard anybody mention the term dual persona. (I've been avoiding it myself, often by simply writing longer descriptions of the same concept.)

In its place, the term "data separation" has been coming to light (Google has used it in conjunction with the new enterprise features in Android Lollipop), and it seems like a much more friendly term. Instead of dual persona portraying users as Dr. Jekyll and Mr. Hyde, they're just one person now—it's merely the data that's separated as needed.

This is reflected in the user interface of today's products, too. With iOS, MDM can apply data sharing policies to corporate email accounts while at the same time users can have unrestricted use of their personal accounts—all in the very same app. Safari is similar—specific domains can be flagged to use a VPN while others just go straight to the internet. And third-party apps that are managed with MDM intermingle with personal apps on the home screen, creating a unified experience. On the Android side, corporate-managed apps using Lollipop's new enterprise features will visually intermingle with personal apps, too.

This doesn’t mean that the old techniques have gone away or are less important—for example, limitations of OS-based MAM mean that there are still many use cases for third-party email clients; and also many users still want to segment their work and personal lives—but we do have a lot more options now. Keeping corporate data out of personal apps doesn’t have to mean a completely different “dual persona” experience. Now we can also just do “data separation” and leave the user interface alone. 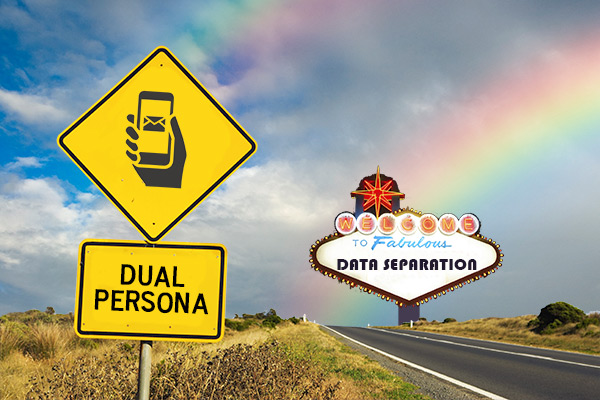