Last September I wrote about Intel buying Neocleus, a software company that was working on a Type 1 "bare metal" client hypervisor. (Well, actually this purchase was never officially confirmed by either company. Neocleus's website has remained unchanged, although their blog is down.) 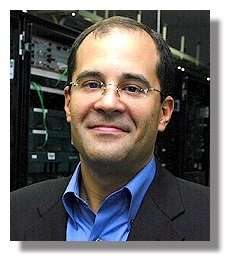 Nothing more really came from this over the past few months until last week, when I had a chance to sit down with Intel's Rick Echevarria (pictured left, from his twitter profile). Rick is VP of Intel's Architecture Group (and the guy who owns the business clients & vPro). While he wasn't prepared to go on record too deeply about Neocleus, he was willing to share a few things. First, the mere fact that we had this conversation confirms that Intel did in fact buy Neocleus (or at least some part of them). The rumor was that Neocleus was out of money and about to shut down, and that Intel bought them for less than $1m. Rick wouldn't confirm that, but he did confirm that Intel now has the Neocleus folks working for them and owns their intellectual property.

Finally, having client hypervisor expertise in-house means that (much like the acquisition of McAfee) Intel can remind customers that they're about more than silicon, and the deeper knowledge they have on the software side of things, the better.

IMO it's better that Intel bought them rather than Citrix. As you have already stated it shows that they want more of a presence in Desktop Virtualization and this coincides with their Dynamic Virtual Desktop initiatives.

I see this move not benefiting a single vendor, but the technology in general.

I really find it very hard to believe that Intel needed to bring Neocleus employees on board so that it could " have a conversation with their partners about client hypervisors."

Hadn't Intel and Citrix already partnered on XenClient before Intel picked uo Neocleus? Surely a passing understanding of client hypervisors would have been needed before that deal was inked.

The explanation does sound a bit hinky, but it doesn't surprise me that Intel wanted folks that could go toe-to-toe with their partner counterparts. Being able to distinguish truth from fiction is a valuable commodity.

An Israeli publication mentioned the acquisition and put the price at $250K.

Anyone thought of what potential synergies might exist between McAfee and Neocleus?

it does sound hinky. But we also ahve to remember that their partnership with Citrix and the requirements for the XenClient based on that partnership caused some people pause... "Why do we require X?" "Because of this partnership"...

Maybe they will make a hypervisor or  some free version of one. Who knows. Who cares I guess is my question? Citrix? maybe. Maybe not. If Intel put out a working client hypervisor it would just be further validation for CTXS and Xen Client. Though that may be a poke at VMW.

A) a move to get parts of Xen into microcode

or maybe it was

C) - hey, we had some spare change in the budget that we needed to spend or we would loose it

but I think Mr Edgeseeker has asked the most interesting question "Anyone thought of what potential synergies might exist between McAfee and Neocleus?"

and for my thought on that I'll have to plug my previous post on the topic > simonbramfitt.com/.../intel-acquires-neocleus-cloak-and-dagger-or-bait-and-switch.html

I think it was purely opportunistic, but as I have mentioned previously I think it is a positive thing in the long run since it distributes the balance of power with respect to client hypervisor "smarts."

Sometimes there isn't a deeper meaning, Maybe the song is really about a girl named Lucy who is in the sky and has diamonds. ;)

I think one of SImon's scenarios is closest. I think the messaging out of Intel/Neocleus, while sparse or even cagey, is not evasive. I'm going to go out on a limb though and say that I do not think the vPro angle is on target -- or at least not first in any supposed embedded roadmap. There's much lower-hanging fruit for them to start with. Client-Side Hypervisor technology has much ground to cover before it becomes market proven in the way we're talking about here. But if you think about it, they have several other, more traditional arenas where embedding a hypervisor could yield a much more immediate advantage - or at least retain relevance. I think it would be safe to assume Intel were already working on several such things before the acquisition.