[UPDATED with Winner at the end of this article]

Last month, Gabe and I announced that we’re planning on doing a five-day, five-product VDI shoot-out. There were a lot of great ideas in the conversation around the idea, and we’re working out the details of exactly what we’ll do and how it will work. (And we’ll share more thoughts and ask for more opinions as we get a bit closer to the week, which will take place March 8-12.)

But today we have a more pressing need. In last month’s article, we asked you to pick which five products we should evaluate. We got the top four loud-and-clear:

Unfortunately, we had just about a three-way tie for Product #5 between Red Hat, Sun, and Symantec. 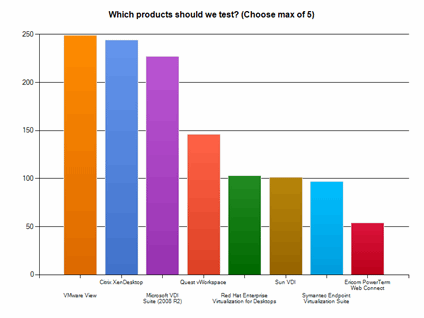 We also received complaints from several vendors who weren’t included in the original survey. So today we’d like to ask you to vote again among the other products to pick the fifth one for our VDI Week. Today’s contenders are:

[UPDATE] Voting is now closed. The winner of the voting was Red Hat, which will be our fifth vendor for our VDI week. I should point out that there was quite a bit of "suspect" activity, like dozens of votes from the same IP address within a few minutes which we guess is either one voter clicking back-next-back-next-back-next or a vendor sending an email out to their company asking everyone to vote. (You know, when a vote comes through without our article as the referrer, it's a bit suspect! ;)

So anyway, Gabe analyzed the results as they were (including suspect activity). Then he also removed all the suspect activity and ran the results again, and Red Hat was the clear winner both times. (It's probably worth noting that every vendor except for Ericom had suspect votes, so it's not like we can just disqualify them.) We also considered replacing Microsoft with our second-place winner, which was VERDE, but ultimately we decided not to since Microsoft was a clear winner in last week's voting. (And after all, if people think they don't have a "real" solution, then this is exactly what we want to find out!)

A full discussion of the voting and results is in this week's Brian Madden TV.

What about Parallels VDI (www.parallels.com/.../vdi)

That said, we still like Parallels, and if there ever is a straight up virtualization technology shootout, they'll for sure be considered.  And, of course, if they ever create a full featured VDI solution, they'll be in the discussion as well.

@Gabe Do you mean they don't make there own connection broker?

Their VDI Solution encompasses quest's connection broker... I've just recently started working with there Virutozzo solution and got a glimpse at there VDI solution, which is pretty much the under lining container technology teamed with quest's conneciton broker. ( They only work with Server OS's 03 and 08 with xp, win7 themes)  It get's around VECD although you don't have that full isolation like a VM, as your sharing a single OS. Can't install kernel mode drivers etc.

I recently spoke with someone who had 5k containers used in a VDI deployment and he was quite happy.

So, do you have the beta version of RHEV for Desktops or have you heard it is going to be released GA before you do your competition?  It's what I voted for.

So how are you defining VDI in regards to this comparison? I'm confused as to how Microsoft is being included in a VDI shootout since the only way to have dynamic provisioning of desktops in their infrastructure is to use Citrix's XenDesktop and have the DDC do all the work. Without the dynamic desktops, it's really just a bunch of RDP connections to static OS's which is hardly a new concept. Whether or not they have a connection broker should be irrelevant, provisioning should be your deal breaker. IMHO

My vote goes to SUN. They have a very 'different' client-experience centric approach and I'd like to see what points of comparison can be made with other VDI product suites.

Sun VDI may change significantly over the next few months because of the Oracle acquisition.

Symantec VDI is changing right now as you confirmed with this news:

So Red Hat VDI is where you (and the readers) may want to invest time.

Although they're not major players, I'm more interested in how Wanova, Ringcube, MokaFive & Unidesk (Ron: 'nuf talk - just launch it!) stack up in the real world than any of these 'also ran's'. Especially now Symantec doesn't have Workspace Profiles.

Actually, make it 3. Blow off Microsoft's POS and super $$$ VDI. Only a misguided tosser is going to pop all their eggs in that basket. Better still, just add up the cost of a theoretical deployment, scare us all with your results, and in this economically adjusted world, put the MS argument to bed once and for all.

My vote would be for Kaviza or Verde because they are so different in their approach.

I agree with get rid of MS, they have no solution. You have to add Citrix or Quest for anything real world. Iâd rather see Red Hat in place of MS, because of IBMâs interest in KVM and desktops to understand what may come.

Iâd also kick out OS hack options like Parallels and RIngCube because they will not support all apps so marginal use cases. Some of the other startups seem to only address a small use case.

No interest in a custom hardware solution AKA, Sun and Pano.

@Alessandro -- I would have thought you would support Virtual Bridges ;-) If you want something innovative and unique as compared to VMware and Citrix, that would be Virtual Bridges. And, unlike Red Hat, we have actually been shipping a KVM-based VDI solution for some time...

@Appdetective - thank you! I would think since IBM has selected Virtual Bridges, along with Vmware and Citrix, as one of three VDI solutions for their SMART Cloud offering - that alone should merit inclusion in the Shoot Out.

While Sun Ray is an option for the Sun VDI solution, it's not required.

@Gabe, You say that Parellels is not in because it has no broker. Quest has no VDI solutions.

icrosoft is simply to slow and sluggish to get more then 40 images running on one host.

So this goes between VMware view and Red hat.

Looking forward to see who wins.

My penny on this? A lot of work for a sharkweek that will not make anybody more smarter.

I definetly would have taken out the big ones and arranged a vdi week for the new company's that are coming up and having some cool technologies. I like Atlantis, but does it scale?

I enjoyed my demo and the movie on this site about VirtualStorm. Very cool and compelling, and it definetly scales. Cool demo at VMworld.

And to bad that Sun did not made it. Larry wants to go big on sun VDI and sunray's.

Symantec lost? Oke, do they have VDI?