On Friday Google launched the public beta of the "Google Remote Desktop" extension for the Chrome browser. This extension allows one computer to remote control another, all done via Chrome extensions on both ends. We first learned that Google was working on something like this over a year ago. (Back then they were calling this "Chromoting"), but this is the first time that the general public has access to this capability.

The current beta requires that a user is present on both ends. The person whose desktop is being remotely controlled clicks a button that says something along the lines of "I would like to be controlled" which generates a key. Then the remote controller types that key into the Chrome web app to initiate the remote control session. 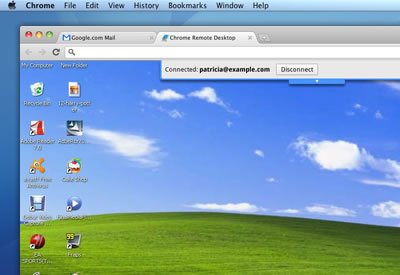 The requirement to have a user present on the remote end means that Google Remote Desktop is not ready to replace LogMeIn or GoToMyPC. However, Google's official description of the extension says: The goal of this beta release is to demonstrate the core Chrome Remoting technology and get feedback from users. ... Additional use cases such as being able to access your own computer remotely are coming soon.

From a technical standpoint, a message on the Chromium-dev mailing list reveals some basic details about how it works. Responding to a question about what protocol and what libraries it uses, Alpha (Hin-Chung) Lam wrote:

The protocol is something we designed and based on several google technologies:

Digging into that, this basically looks like a peer-to-peer, secure, reliable connection, with VP8 encoding happing at the remote host and a simple VP8 player on the client. (Although the client also has to have the ability to send keyboard and mouse data to the remote host.)

What's this mean for Google?

Now that we've seen the basics of how Chrome Remote Desktop works and we're hearing what Google might want to do with it, what does this actually mean for Google? Why are they going down this path?

At the most basic level, Chrome Remote Desktop means that Google can enable access to legacy desktop apps from Chromebooks without needed any third party software. As long as a user had a desktop running Chrome somewhere, they could access that desktop and those apps.

Of course we've already seen similar concepts from other vendors. Citrix actually showed off their HTML5 "clientless" Receiver at the Chrome launch. And we've also seen (either released or in preview form) full browser-only clients from Ericom, InstallFree, and VMware. So this is nothing new per se. But why is Google going down this path?

Is there maybe an angle here for Windows apps from the cloud? Maybe it's about the cloud and not about your own desktop apps running at home. Although I can't see Google caring too much about the cloud. Certainly their platform can't run these apps. Sure, we can understand Microsoft doing this with Azure, but they have twenty years of legacy apps to protect. Google doesn't.

Then again, who's the real audience? Will personal end users still have apps? And if they do, won't they be intense apps that won't work in the chromoting environment anyway? I mean if people are just getting occasional access to MS Office, wouldn't they just switch to Google Docs?

Regardless of what it means, this is just another tiny pebble pushing Windows into the "middleware" space that they're destined for in the "Small d" world.

I suspect the move primarily has to do with collaboration and sharing more than anything else. Tools like WebEX, GTM, and Lync are in the cross hairs if Google builds a business tool with Google+,

It's possible it's part of the Chromebook strategy, but hooking up with a 3rd party like Citrix for TS apps I think would be better.

Thanks for the details!

I can hear Shawn and Benny right now saying "COME ON! ANOTHER PROTOCOL TO TEST?!"

This is, I think, the first "real" use of VP8 in the wild (certainly in our space), so it will be interesting to see how it performs. Other than that, though, I'm all for taking the wait-and-see approach to this.

I think what Dan Garcia says makes sense, because it appears that Google wants to use the masses to get them into the enterprise. I think that make a free remote and collaboration tool would be a good route to take.

But, don't for one second think that Google isn't looking at other ways to use the technology. To go beyond remote support and collaboration, though, the performance will have to be good, if not great. That's where the wait-and-see comes in.

Brian's hit the main angle at the end of the article.  While it's not anything new, the alternatives aren't owned by Google. Google Docs is fine, but a lot of organizations won't touch it (officially), due to GRC issues.  This allows Chromebooks to get to a full Windows desktop for all of those things that enterprise users can't really cloudify.

While it is "one more protocol", it's one that has mass market appeal without requiring a View or XD installation.

I'm unconvinced by the collaboration angle âÂ Google already have Docs for that. They were working on this last year (I left before it saw the light of day) and I never really gave it much thought because the application wasn't obvious. I think Brian's hit the nail on the head here:

"At the most basic level, Chrome Remote Desktop means that Google can enable access to legacy desktop apps from Chromebooks without needed any third party software. As long as a user had a desktop running Chrome somewhere, they could access that desktop and those apps."

This doesn't even have to be particularly good âÂ it's just for legacy stuff and just while people migrate to "100% Web" alternatives. In that sense it's genius and it'll be interesting to see how a protobuf (similar to ASN.1 used by T.120 aka RDP) and VP8 protocol performs compared to the "legacy" incumbents. RFB would suffice too but it's fairly basic and doesn't perform fantastically... to deliver a "true" desktop experience you need to do a lot more magic.

We digress. The thing is that devices like Chromebooks are likely to drop Windows + Intel ('WinTel") in favour of Linux + ARM ("LinARM") or similar (iOS). That means that you don't even have the option of running apps locally, so you need to go remote.

I don't think this will make a huge splash, but it could remove some blockers for deployments.

Some new features for Google+, and Google Apps have been announced... Screen sharing most notably.

We'll see about its future for virtual desktops, perhaps for the consumer market. I still think CSPs or managed host providers would opt for more control and management abilities (Citrix\VMware).

Today its is just a protocol.

Great article on Google chrome remote desktop tool, wherein, a person can take full remote access of remote computers using chrome browser. I have used it and it is very easy to use. Additionally, one can always consider using various other remote support tools such as logmeinrescue, gosupportnow, TeamViewer, GoToMyPC etc. in order to establish remote desktop connections between computers.