You’re probably well aware that one of the hottest topics in enterprise mobility management right now is iOS 7. More specifically, you might also know that that iOS 7 is going to natively include mobile app management features that are currently strictly the province of third-party vendors. (This was a big topic last week at BriForum, too.)

Since we’re going to be talking about this topic a lot—iOS 7 isn’t due for at least another month or two—I want to take some time to make sure we’re all on the same page about the different types of mobile app management (MAM) we’re talking about.

The two types of MAM I’m talking about are:

Many of you are probably familiar with mobile app management, but before we get to the different types, I want to first reframe it in sort of a generic way. So here I’m not talking about any specific technology, like SDKs, app wrapping, mobile virtualization, or anything related to a particular platform. Rather, for now just consider MAM to be anything at all that can take management policies, security features, etc, and apply them to individual mobile apps. The result is much more granular control than is possible with device-level management, a must when multiple parties have interests on the device (i.e. when users mix personal and corporate apps on the same device). See Figure 1, below: 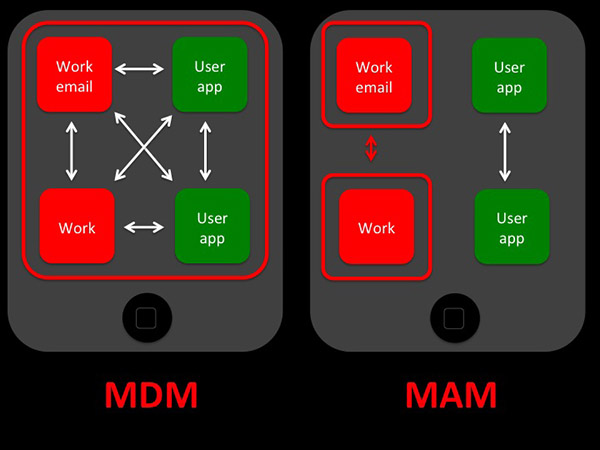 (Fig. 1: Device-level management and MAM. The red boxes represent the boundary of corporate management policies, and the arrows represent inter-app communication. Notice that on the MDM side, the work and personal apps can communicate freely, an obvious security and compliance risk. The personal apps are subject to to management, as well. On the MAM side, there’s more control over how the work apps communicate with the personal apps, and the personal apps are unaffected by policy. Now certainly this can get tricky, especially when you’re talking about apps that users might use for both personal and work tasks, or when you’re talking about email, but that’s a conversation for another time.)

For the last year or so, when we were talking about MAM, most of the time we were talking about MAM from third-party EMM vendors. Third-party MAM influences the way apps themselves behave, regardless of status of the device they’re running on. In other words, all the features we care about are built into the app itself, and there’s no need to manage the device to get them to work. There are several ways we get these types of apps, all of them involving third party sources:

The advantage to this type of MAM is that you don’t have to worry as much about the device. (This is especially important with Android, where fragmentation makes things difficult.) Also, MAM features from third-party vendors can go way beyond what’s provided by the device. (For example, different types of encryption, support for different types of VPNs, geofencing—the sky’s the limit!)

The disadvantage is that the apps have to be specially built (or modified) to have these MAM features. See articles about MAM standards, difficulties around acquiring MAM-capable apps, and difficulties distributing them.

Now with iOS 7, people are excited that many MAM features will be enabled directly in the operating system. iOS certainly isn’t the first platform to have this, but it has the most significant impact because iOS doesn’t have to deal with fragmentation, and it will be the largest install-base of any operating system-enabled MAM when it comes out. Other examples of OS-enabled MAM include:

Here are the advantages with operating system-enabled MAM:

These are both a really big deal. But there are disadvantages, too:

App-level management (MAM in general) is becoming a very important part of enterprise mobility management. iOS 7’s MAM capabilities will be a big deal, but it’s important to keep in mind the differences between third-party and OS-enabled MAM. (And of course all of this is important for conversations around Samsung KNOX, mobile virtualization, and other platform-enabled MAM, too.) Clearly there are places for all types of MAM.

Keep tuned for more on iOS 7 and MAM in general—there’s lots more to talk about!

I think the important point is where the MAM capability is coming from -- the OS, or a 3rd-party -- not whether the MAM is applied during the development process or after compilation, or whether the policies are applied from within the app or external to it.

Instead of "external" and "internal", I prefer "native MAM" to describe OS-delivered MAM capabilities, and "3rd-party MAM" to describe capabilities that are delivered by, well, 3rd-parties. This focuses us on the evolving dynamic between native MAM (or native containerization) and 3rd-party MAM, which is what I think is more interesting. As native MAM matures, it arguably chips away at the value proposition of 3rd-party MAM -- iOS 7 is an example of this evolving dynamic.

I agree! "Internal" and "external" were a bit confusing, so I updated the article to remove them.