Barry Schiffer, an IT architect at SLTN Inter Access, and Bram Wolfs, an IT consultant with a focus on end user computing, hosted a TeamRGE webinar explaining that user experience is integral when deciding on the best remote display protocol between Microsoft RDP, VMware Blast (now known as Blast Extreme), and Citrix HDX. There are three things to consider: UX, server density impact, and bandwidth utilization.

They cover the two codecs to choose from: bitmap based or video based; reviewing the use cases for each, as well as the pros and cons. Schiffer and Wolfs discuss how each of the three major players handle the limitations of video-based codecs for desktop virtualization and how to compare each before making a purchasing decision.

Now that you know more about remote display protocols, why not watch some more TeamRGE videos or learn even more about desktop virtualization from our other exciting videos?

Come back next Friday where we’ll look at Remote Desktop Modern Infrastructure! 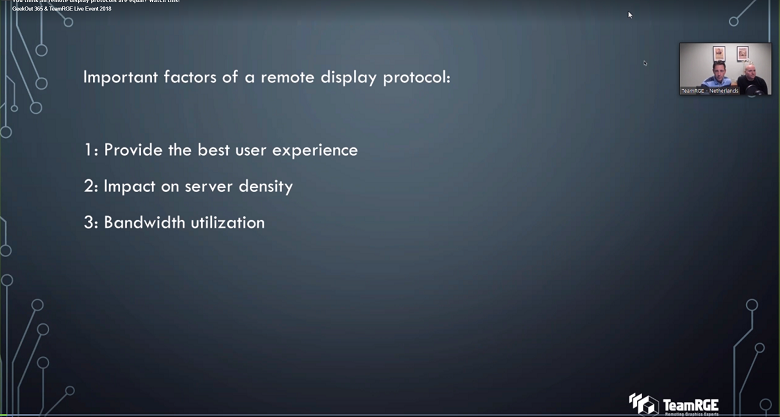