Back in 2013, I wrote about a startup called “Mainframe2”, a new company that delivers Windows desktop apps as a service from AWS to a browser. They had an impressive demo of Autodesk Inventor running in the cloud which I embedded in the post. (I mean I embedded the actual application in the post which you could use—not a video of the application.)

Mainframe2’s technology was based on their H.264-based delivery and all the cloud platform orchestration they did on the back end. The client is browser-based with no plugins required.

Over the past 18 months, Mainframe2 has had great success with ISVs. (If you’re a software vendor and you have a desktop app that you want to make available as a service, you call them and they help you make it happen. Done.)

That said, since they focused on ISVs, we didn’t tend to think too much about them from the enterprise IT standpoint and we haven’t covered them on BrianMadden.com.

However that is all changing now, as Frame (as they’re now called) is getting ready to launch a direct-to-enterprise version (called “Frame for Business”) where they give enterprise IT departments access to their platform (still running in the cloud) to host and deliver their own Windows desktop applications. (So, really Frame is like a DaaS provider, using AWS, with a very simple self-service engine.)

Since their claim was that it was so simple, I went to fra.me (<— that is literally their URL. f-r-a-<dot>-m-e) and entered my email address. A few minutes later I had the confirmation email, which I used to login. The web interface is pretty much as you’d expect. It shows any apps that are published for that user (Windows or web), as well as an overall system status (green/yellow/red) and links to other settings and information: 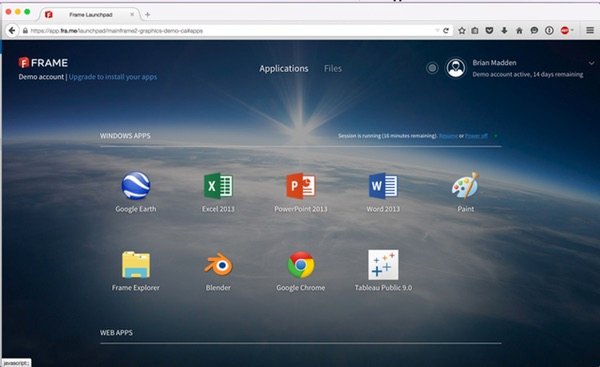 They have a few sample apps you can try with the demo account. I chose Excel: 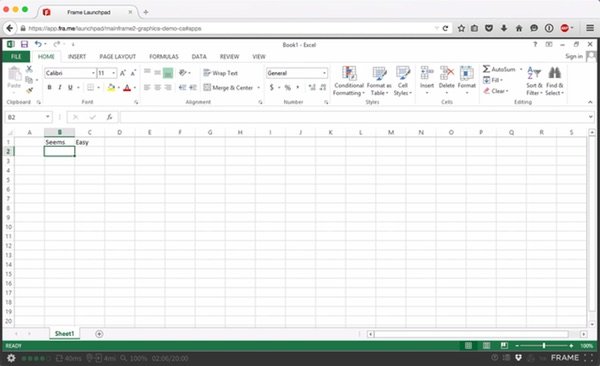 No real surprises. It felt fine. I like the stats they have in the lower left corner which show what the latency is and how far away you are from your server. You can also click the gear icon in to switch to or launch other apps, or to share your session (which it does by emailing a link—very cool!) or to disconnect or log off. 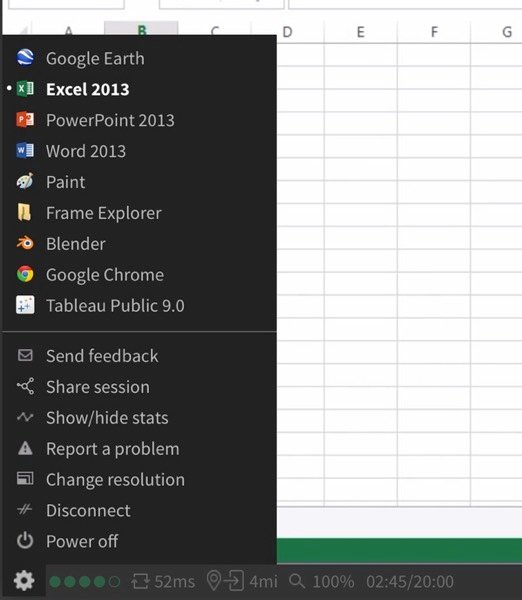 If you disconnect, Frame explains in lay terms what’s happening: 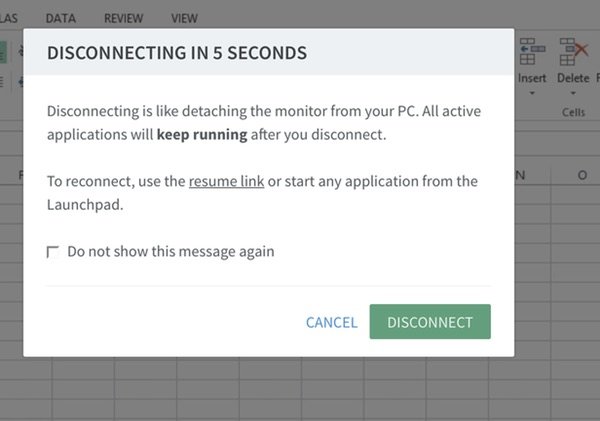 For files, Frame can connect you to Dropbox, Box, or Google Drive, and when you do that you see a new drive share in your desktop for each service you connect. Again, very simple. 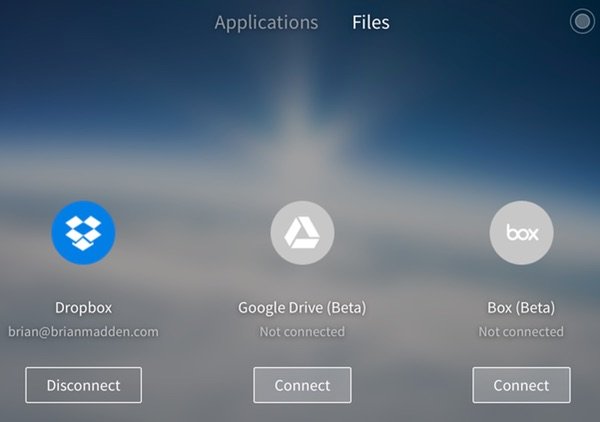 The best part is the price. Frame starts for businesses at $15 per month, per user. You end up buying a pool of hours that you can allocate however you want, and pricing goes up from there. But in terms of a very quick way to get your desktops up and running, or to try out DaaS, this is one of the easiest solutions out there.

The ultimate vision for Frame remains the same as it was for them in 2013 when they were founded. They want to make sharing a Windows application as easy as sharing YouTube videos.

Will Frame give Citrix or VMware a run for their money?

The real question for Frame will be whether this will be an actual alternative to Citrix or VMware in the published app space? It’s not 100% apples-to-oranges since Frame only operates on the public cloud (a positive or a negative, depending on whom you ask). Then again, you can literally get up and running in three minutes. (The Frame for Business offering lets you assign apps to users, install your own apps, hook into your own authentication, etc.)

So yeah, on one hand, Frame is not as flexible as Citrix XenApp or VMware Horizon 6, but on the other, again, it’s just so easy to get up and running. (And, frankly, their performance using just a browser as a client seems pretty dang good—perhaps better than Citrix and VMware? Well... you can be the judge of that.)

You can test drive Frame now to see it for yourself. They’ll be officially launching next week which will be when you can install your own apps. I’m curious to hear about the experience from anyone who tries it, so if you do please come back and share your thoughts.

I’m also curious about your thoughts on Frame in general? Of course I am in “the more, the merrier” camp when it comes to vendors. What about you? Can you see a place for Frame? Can you see value? Big companies? Small? Niche? Mainstream? What do you think??

How do they handle the dreaded 'printing' challenge?

When you're connected to Frame in a browser and want to print from a remote app, we'll prepare a printer-ready document and open it in a new browser tab. The process is quick (<10 seconds) and 100% automatic. You can print to any local printer (that you hopefully configured already).

Very interesting.  The latency and distance indicators are a nice touch too.

I wonder if they might offer an private cloud model in the future.  Some of my customers have zero desire to put their data up on AWS or any other public cloud service.  Engineer and Design organizations have a lot of sensitive IP.

Also, I would love to see a comparison between Frame's display protocol and VMware's Blast.

Frame is an infrastructure-agnostic platform that is available on AWS and Azure today. We'll be adding more public cloud options this year.

Re: private cloud -- all I can share today is that we totally understand that many customers (esp. people hanging out on this blog) are interested only in on-premise solution. Stay tuned.

Just tried it from Ireland (5135 miles away from wherever they're hosting).

The UI is fantastic. A badly needed breath of fresh air.

Performance was excellent considering the distance. Integrated clipboard was a nice touch and session roaming (they call it "resume session") worked flawlessly. I was kicked out after 20 minutes, but I bet their servers are getting slammed right now.

If they can get it running at scale without hiccups and security breaches, this will be huge.

I think Clyde phrased it right - "Performance was excellent, considering the distance".  From a working perspective, we're going to need closer servers.   I can live with demos being laggy, but not production. I look forward to trying a US east coast datacenter.

Agree with Clyde -- the product is very slick. Easily the best app streaming stuff I've seen from the cloud.

Any info on min. number of seats? What OS are they using (not Windows 7)? Native clients or browser-only? How about SLAs? And where are they running from? Signup email says "8 datacenters on 5 continents" -- where exactly are these?

@rick I too would like to see a comparison of Frame's tech with HTML clients from VMware and Citrix, esp. high-end graphics over WAN (maybe something Shawn, Benny, and Ruben plan to cover at BriForum already).

Looks like rich graphics apps in the cloud are finally happening...

@Clyde -- thanks for your feedback. We do believe that user experience matters and it's where we spend a lot of time.

Sessions are capped at 20 minutes indeed for the demo system to let everyone try it. Also, we're hosting in in California (AWS in Palo Also, to be more accurate) for all demo users. Starting July 8, you'll be able to get your own admin account and install apps in 7 more datacenters; N.Virginia (US East Cast), Ireland, Germany, Japan, Australia, Brazil.

@Pat Where do you need the service on the East Coast? N. Virginia is what you'll be able to use next week. We're working with partners to make Frame available from more locations up and down the East Coast, from Boston to Florida.

Could you tell me a little bit more about technology behind Frame ? Is it running on top of RDS services ?

Seems like cool tech. How does the licensing work? I believe the OS is covered since it is 2012R2 under covers with the Amazon base usage, but how is the TSCal handled? On the app side do you bring your own licenses for Office, Adobe, etc? Wondering how this could be different like how TuCloud, OnLve, etc got hung up?

Frame for Business has a 5 seat minimum. Default OS is Windows Server 2012, but both WS2012R2  and WS2008 can be configured on demand. You can run apps using web (HTML5) terminal, and there are also native terminals available for Windows, Mac, and iOS. As far as hosting goes, Frame is infrastructure agnostic. Most of current cloud workloads are on AWS, and we'll be announcing other IaaS partners shortly.

Re: protocol: as Brian mentioned, the Frame protocol uses H.264 for transport (hardware encoding and decoding is not required but itâs used where applicable). More importantly, there's an extensive QOS layer that goes on top of H.264. This includes variable bitrate, variable frame-rate, and content and decoder adaptation.

To see session stats in real-time while running an app, click on the gears menu (bottom left) and pick âShow/hide statsâ (as seen in one of the screenshots above). L1 stats include bitrate, frame-rate, and latency.

Typical productivity apps look great <100kbps, and the protocol will drop the frame-rate as needed (often down to 1fps) . For high-end graphics, like 4K video editing, we use available bandwidth all the way in the 50+Mbps range and up to 60fps. For more details, see blog.fra.me/.../what-has-1gbps-symmetrical-internet-and-no-need.

We welcome independent tests vs VMware Blast and Citrix HTML5. f youâre interested, let us know (info@fra.me) and we can provide more details, including L2 and L3 stats and logging details.

Where can we find more pricing details?

Frame looks really cool and hopefully will be a viable option in the future, but I feel that they might run into the same problem as the likes of OnLive with Microsoft Licensing.

Frame's FAQ ("How does software licensing work?" section on their FAQ page here: https://fra.me/faq) seems to just suggest that "if you have a Microsoft license, you can install it" which is so very, very, VERY WRONG. OnLive (and others) got into trouble because they ran afoul of Microsoft's EULA and lack of proper SPLA licensing agreement.

While the AWS infrastructure is coving the Windows Server license necessary, applications such as Microsoft Office are only "portable" in a very specific circumstance (through a very particular Volume License). So as a result, it's against the Microsoft EULA to just install Office or any other Microsoft application willy-nilly in a hosted environment.

The hosting Service Provider, possibly Frame, possibly Amazon in this instance has to be the one to provide the licensing unless the license of the Microsoft Application has "License Mobility" rights, and again, only under certain circumstances with Volume Licensing is that the case.

@Clyde: Frame for Business starts at $12.99 per user per month, with minimum of 5 users. For more details, see fra.me/pricing-business.