We've had some pretty good exposure to Quest vWorkspace in the last year, having seen them at Geek Week in the spring with vWorkspace 7.0 and then again over the summer when they demonstrated their EOP Xtream enhancements to RemoteFX. Recently, they released version 7.2 which, while minor, has some important updates. I realized that I hadn't set up vWorkspace myself in quite some time, so I decided to lab it up and jot down my thoughts.

I first installed Windows 2008 R2, turned on Hyper-V, then proceeded right to installing vWorkspace. Had I put any thought into that process whatsoever, I would've installed SCVMM beforehand, too. This, I believe, created some issues with networking a little later on when setting up virtual desktops. So, if you're going to stand up vWorkspace in a lab, make sure you get SCVMM installed if you're going to go that route. As always, vWorkspace still supports VMware ESX, Parallels Virtuozzo, and plain Hyper-V.

My lab is pretty weak at the moment, consisting of a medium-sized desktop that has vPro and can run what I need for testing, plus an old server that isn't good for much more than hosting a domain controller and some service VMs. Thankfully, the install process for vWorkspace includes a Simple mode that installs everything you need on one box for evaluation purposes. Quest calls the components "roles," but they're not the same as "roles" in Windows Server 2008.

Here's what you get with Simple mode:

This is cool because it installs all of the roles and prerequisites. Even after fighting my silly networking problem, it still only took me a couple hours to get a fully functional vWorkspace environment going.

Before you can point vWorkspace to a Hyper-V or SCVMM host, you need to install their "Broker Helper" on it to establish communications between the two systems. I don't recall seeing that during the Simple installation, but it definitely needed done, which I learned after I started configuring. To Quest's credit, it is in the documentation, but I was feeling high and mighty back in the Windows world, having just wrapped up my Virtual Bridges review, so I skipped the install doc.

I should add that you also need to have a Windows VM template created as well, since importing that is part of the wizard.

After installation completes and the management console is started, the Quick Start Wizard asks you choose what kind of vWorkspace environment you want to deploy. In my case, I chose Virtual Desktop, but Remote Desktop Session Host (Terminal Services) and Blade PCs are also options.

The next step is to define computer groups. Computer Groups are the organizational units of vWorkspace. Computer Groups can have policies applied to them and different deployment methods so that you can use one vWorkspace implementation to deploy any combination of virtual desktop solutions.

The final require step is to create the computers that will be used for end users. During this process, you'll select the following:

The Quick Start Wizard also optionally lets you configure all of the profile, user environment, printer policies, and desktop policies that you would ordinarily configure through the management console. They're still available in the MC, but it's nice to have in the wizard, too.

The rest of the process has been covered by us in one form or another over the past year, and it hasn't changed much beyond that fact that instead of powering VMs on one at a time to prep them, they are now started in parallel. From there, the user experience is also the same as what we've seen in the past. In a future version we'll see EOP Xtream support for RemoteFX, so we'll circle back and do a proper user experience review at that point.

Reporting and auditing is biggest addition to vWorkspace 7.2. vWorkspace now keeps real time and historical accounts of various actions and metrics in the vWorksapce farm.

For Google's sake, the default sa password for Quest vWorkspace is Password1. If you chose the Advanced installation, you were prompted for that information, so you should know what it is.

The actual reporting feature isn't available through the management console. Instead, it's in the Start menu in the Quest program group. Start it up, and prepare to be amazed… 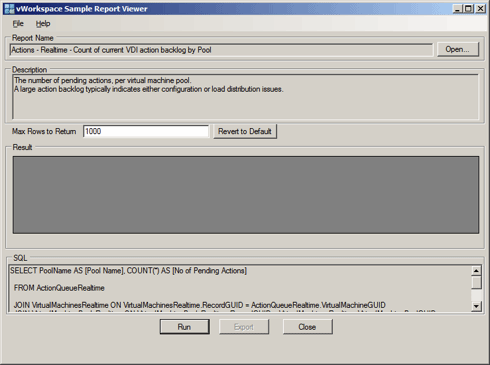 So…this is it? This fugly thing? It's not pretty, but to be fair I was warned ahead of time that it was definitely a v1. The goal at this point was the get the information into the database. There are twenty or so sample reports that can be viewed through this rudimentary viewer, and the information would be useful if you knew what you were looking for. At this point, the best way to make use of this information would probably be to use some sort of reporting tool to create your own reports and monitors.

In the future, I expect this will be added to the management console and given a nice frontend. Quest has lots folks on staff that do this kind of thing for other product unders the Quest umbrella (Foglight, Reporter, Spotlight, and I'm sure a few more).

There's also a new licensing model which, if it's not new in 7.2, is new since 7.0. Instead of the funky web-based activation that you had to go through for previous versions, the new system is file based and a lot less complex.

Other new additions and changes to vWorkspace include:

And finally, just in case someone else has the networking problem and finds this via Google, here's what happened: When I tried to import a template VM into vWorkspace and clone it, the clone jobs failed. Turns out the VM I built and converted to a template in SCVMM used an emulated NIC, not a Synthetic one.  So, I deleted the emulated NIC and created a synthetic one. I also needed to configure a network ID (done at in the server properties) and assign it to my new, synthetic NIC in the VM properties.

Have you or do you use vWorkspace? Share your thoughts below. As I mentioned before, we'll get down and dirty with the user experience once RFX comes out and we can cover everything. Quest has a lot going on these days with their partnership with Virtual Computer and their OEM agreement they have with Liquidware Labs, so keep your eye on them if you're looking into a desktop virtualization solution.

Thanks for the review, Gabe.

The "fugly" report viewer UI you refer to was a last-minute addition so users can see what the .sql report templates do without the need to install a 3rd party report viewer. It wasn't designed for regular use.

Later this year you'll see us deliver integration with some of Quest's excellent reporting and diagnostics products to deliver a comprehensive interface that continually interprets all this data (and more).

As an existing customer the reporting side of 7.2 is most welcome - The master DB schema wasn't the easiest to figure out!

I like the easy installer (useful still for existing customers) as it allows me to setup test environments very quickly to debug, test new features, etc.

We had teething issues with Hyper-V/SCVMM also!

Here's more information on the new features in 7.2 from a technical / functional angle: communities.quest.com/.../spotlight

Does this still apply in 7.2?  No one want to flip all their legacy TS apps to vWorkspace TS just to use VDI.  I've always been a big fan of vWorkspace, but this is a show stopper for people IMHO.