I had a chance to have a chat with Calgary-based desktopsites (DTS) earlier this week. DTS makes a desktop virtualization product called Konect Elite, which came across my inbox described as being "like small business version of Quest vWorkspace." I have to say, after talking to them, I'm impressed with the simplicity of the solution. And while I'm still not convinced that SMBs should be rolling their own desktop virtualization (instead, especially if starting from scratch, I think DaaS is probably the way to go), if you must do your own, Konect Elite should be in the discussion.

Let's get some basic information out of the way first. Konect Elite is Windows-based desktop virtualization that's built on existing Microsoft technology, namely App-V, RDSH, VDI, and Hyper-V. They have clients that run on all recent versions of Windows (XP and up), and Mac & IOS are coming in the next version. Konect Elite currently serves organizations of around 50 users, and at $35/user/year, they make that extremely affordable. Currently, though, desktopsites is giving Konect Elite licenses away for free for the first year (after that, it's back to $35/user/year) to anyone that has RDS CALS or Citrix XenApp licenses. I'm pretty sure they'll also count it if you have some sort of VDI-oriented license, but so it's worth a call.

Normally, I would be dragging out my soapbox, climbing up on it, and screaming something about how this shouldn't be targeted at small businesses but at small deployments, but I think you'll see as this goes on that, while they've put a lot of thought into it, it's not meant to compete with the big guys. They say that the product scales well, and predict that they could play in the <1000 user area. The main limitation to this, as I see it, is the fact that the management piece (console, database, web interface) does not have any redundancy.

Konect Elite makes no bones about the fact that they are 100% Microsoft-centric, and that their solution is just about making it easier to use all of the Microsoft desktop virtualization features (except for Med-V, but who uses that?). Remember Geek Week in 2010, how ridiculously difficult it was to set up and use Microsoft's in-box VDI solution? Konect Elite doesn't change any of that backend process, it just hides it all behind their management console so that the process is simplified and accessible to SMBs. 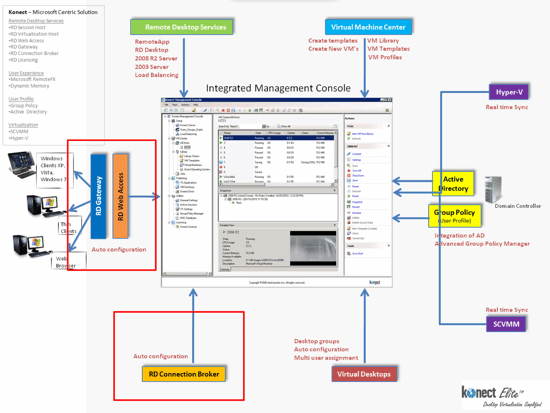 All of applicable configuration options for App-V, RDSH, VDI, and Hyper-V are configured via the Konect Management Console, which is part of the simplification effort that DTS has put into Konect Elite. Also from the management console, you can manage group policies, active directory, RD RemoteApp applications, VM templates, VM creation, and the RD Gateway. All from one place! They've even taken this one step further and redesigned the group policy interface so that, by default, only the settings that typically apply to desktops are shown in a more user friendly way. Of course, you can still get down and dirty with GPOs, but boiling off all the unnecessary settings would be great for the overwhelmed small business IT guy. 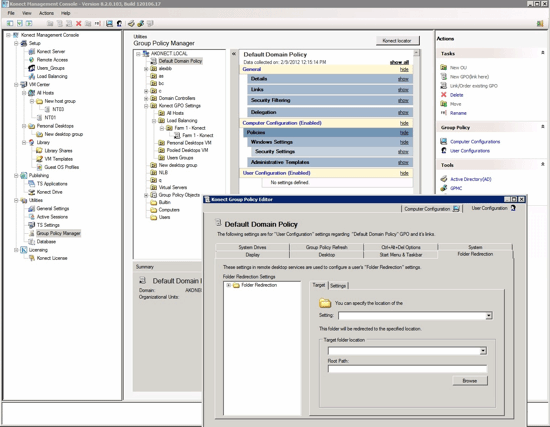 The simplification goes beyond just hiding the complex stuff behind Microsoft VDI. For instance, when you turn on the RD Gateway in the management console, it automatically configures it for you (something small business admins might take a lot of time learning and doing). When you set up a VM template, Konect Elite automatically does all the prep work to make it into a VDI desktop template. It's those kinds of things that held my interest during the call.

Poised for the future

This dependency on Microsoft has been a model taken by many other companies, but there might not be a better time in the history of desktop virtualization to have a product that hinges solely on Microsoft products. Brian recently wrote about RemoteFX in Windows 8, and there are numerous accounts of how awesome Hyper-V 3 will be. Konect Elite is in the position where everything they currently offer will be instantly upgraded in the near future. That makes those sleek additions they've made even more appealing to SMBs especially, but potentially to those smaller deployments in large companies.

They have a few things to work out, like how to make the product more redundant, and how to ensure scalability if they expect to grow into that <1000 user solution. Still, with Microsoft doing most of the work on the actual desktop virt technology, DTS can dedicated all of its resources to making Konect Elite into a simple but comprehensive solution to manage all of it.

I should add that Quest is in the same boat when it comes to the Microsoft relationship. Any substantial ugprades from Microsoft result in substantial upgrades for them, too (although Quest usually enhances them).

The company that needs to be on the lookout, though, is Citrix. SMB's first exposure to desktop virt is probably going to come from VDI-in-a-Box, and let this serve as a warning to Citrix. Konect Elite does VDI, App-V, and TS, specifically for SMBs. App-V and TS are arguably more appropriate for them than VDI is, so it's time to get some integration going on with XenApp and VDI-in-a-Box. Make it Essentials or something like that, but the competition is heating up. I know that increases the overlap between the two products, but it has to happen.

Iâm the Support Manager for Pulse Retail Systems and we have been using Konect since 2010. Pulse Retail Systems is a solution provider for retailers, providing systems from the Point-Of-Sale terminals to Back Room and Head Office functions. Konect is a great solution for our clients. From any PC, they can start server-hosted applications as if it was from their desktop. It enables Pulse Retail to provide managed solutions that are helpful and easy for our clients.  From an admin perspective, since clients cannot see any aspect of the server other than their subscribed applications, our concerns about security are significantly minimized.

Schultz Computer Network Systems has been installing networks and since the early 80's and has supported many platforms. Now here is a product that I have been using for almost 4 years. My clients use Konect to help deploy a variety of applications, primarily accounting and database, apps that are not available in the public cloud. Most common apps are multi-user accounting programs, where users need to be connected live to do any work at all.  All my Konect clients currently have their servers in house, but able to deploy their apps to their remote users in a cost effective way, and this paves the way to move some of their servers to the cloud. Konect Elite is much easier to install and maintain than the other systems I have tried.  DTS tech support is second to none, and while I have had a few issues most were caused by other server OS issues. When you need help, they are there...I am a one man show, so a second set of eyes often helps.