"Brian's desktop vision is a rainbow of complexity!" What an accusation! This was tweeted in response to an image I use when I talk about the current state of the desktop virtualization industry. The image is used to desktop how today's desktop management has to combine traditional, terminal server, VDI, OS streaming, and client-based VMs: 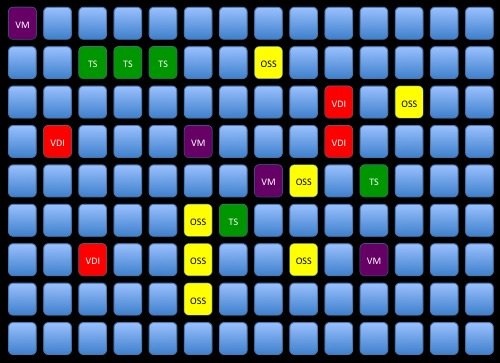 In other words, I'm telling desktop admins that they have to create a complex desktop delivery environment.

So YES, this stuff is complex. But that's the world's fault. Not ours. If our business requirements in 2011 were the same as they were in 1995, then we could get away with a single image and a single way of working for about one-tenth the price of what we're trying to do today. But our business requirements have changed. That's your fault, not ours. This rainbow of complexity is our best chance to support your crazy requirements.

It is a rainbow of complexity, but not all of it is because of user function, some of it is also the maturity of DV technologies and the technical limitation of the devices. Both problems are solved over time.

The maturity of DV that I am referring to is more focused on Client-Based VMs. I am sure if CHVD (Client-Based VMs) were more mature we would see less SHVD (VDI) on the LAN environment.

The technical limitation is has to do with all of the older endpoints that need OSS instead of Client-Based VMs. Those old endpoints will be replaced over time with new ones which support CHVD, and once the technology has matured to the requirements of the business, then OSS won't be needed anymore.

VDI has it's use cases where Client-Based VMs won't make sense, which will ensure it's survival.

TS also has it's own use cases, so it will survive as well despite the maturity of other DV technologies.

Most if not all of traditional PC's will not survive the impact of Client-Based VM's in the future, they will either be replaced with VDI (SHVD - thin/zero/smart clients), or with Client-Based VMs (CHVD - intelligent clients).

Purple is not my favorite colour, but I have a feeling you will see a lot more of it in the future.

The Desktop World has always been complex.

The real "one master fits all" is far away from us now.

IT is serving business and even in a single enterprise you can have lots of different business kinds.

IT has or had to adapt to serve all of them.

When you are talking about virtualizing or centralizing these desktops, it's impossible to have a one size fit all solutions like some vendors would like us to believe in.

Also, installing such an environment in two days is nothing but a dumb marketing statement.

A virtual desktop project is complex because it means centralizing a complex world.

Then it'll involve few or lots of technologies according to the business kinds IT has to serve and all their use cases.

So I do really agree with the rainbow of complexity being a consequence of a complex set of business requirements.

@Icelus What are CHVD use cases in LAN ? Do you really need it or is it cheaper to go to SBC ? For taskworkers, no doubt about it ! This matrix has to be adapted for each customer and for their use cases. Maybe some customers will need CHVD maybe for some SBC will be enough (and cheaper).

You are right, the chart will be different for everyone. But you must admit that there are two models in there that face possible extinction: OSS and Traditional.

my intention wasn't to turn this into a Client vs. Server debate, but since you ask. I guess it's in the eye of the beholder, but IMO CHVD is superior due to the following:

- Users are used to the user experience of local computing, remoting protocals can be geniuses but it will never compare to a local experience.

- The Desktop OS hardware requirements are the same on a client and server but the CPU, Memory, and Storage are more expensive on the server.

- Intelligent client devices will become ubiquitous and the costs will be almost near the cost of thin clients. Unless SHVD came with a free thin client, and even then because of point #2 it still may not be enough to bring down the cost of SHVD.

The SHVD model doesn't bring anything extraordinary to the table. IMO, the order of selection should be:

Taking this further, I am sure we will see CHVD mature far beyond what it is currently capable of. It would be smart if one day you log into your CHVD desktop at work, then, if your CHVD isn't available you can log into the same desktop but SHVD from anywhere. Where your OS, Apps, and Settings follow you everywhere.

Citrix and AppSense need to merge into a single offering.

@Icelus I did not ask for any Client vs. Server debate :)

Anyway I think that the order will depend on customer needs / choices.

For example : if customer is 100% BYOC then CHVD won't be used that much.

Desktop is a complex world and giving a generic answer is something impossible to me.

All we can do is trying to identify some successfull trends, and you may be right with your ranking as a trend, but not for every customer :O)

I agree with you. To take it even further you can say that CHVD is actually competing against the BYOC model. Unless of course the BYOC devices are the ubiquitous intelligent clients that I spoke of, then it can be best of both worlds.

For a business to take on a major BYOC model, they would have to measure the cost of a combined BYOC + SHVD model versus the cost of a CHVD model.

This is all just speculation though because I am loosely speaking in trends with some facts of the expensive costs of the datacenter resources.

It's a matter of use a technology where it makes sense. SHVD is expensive and is a perfect HA and DR strategy, so use it for that. The BYOC term is a fancy term to get people excited, but what you are really providing is HA to any device.

I know there are different requirements, and one org may be the reverse of another, but my main point is that OSS and Traditional computing are facing ever increasing competition for their market share in the Desktop Management Strategy diagram. TS/RDS, CHVD, and SHVD will IMO reign superior in that order.

For superiority, I meant:

Eventually they should all be the same to easily manage, currently they are all uniquely complex. (Grade on administrative experience comfort level)

OSS and Traditional computing is making the rainbow of simplicity a rainbow of complexity.

I was in Brisbane when Brian used this slide and I couldn't agree with it more. I believe versatile IT environments, at least large environments, are likely to be a blend of multiple of these "colours', albeit some using more than others. It's that "one size does not fit all" slogan, where some companies may be predominantly TS with a splash of VDI or VM, while others may be the reverse. There's already a lot of companies already where they use majority desktops with TS in the backend for particular apps (and the odd user running local VM's!). Citrix already understands this - that's why XenApp comes with VM Hosted Apps and XenDesktop comes with XenApp licenses for backend apps. Yes it's complex, but any truly versatile environment will be. How complex it is depends on the knowledge and willingness of the IT team and the users in general.

"Yes it's complex, but any truly versatile environment will be. How complex it is depends on the knowledge and willingness of the IT team and the users in general." I cannot agree more !

Great post, Brian. Desktop management is rapidly evolving from device-centric to user-centric; itâs all about the end userâs experience, regardless of which device is being used to connect to the workplace. With all of the tablets, smartphones and other devices available â which youâve identified as the âeffectâ not the âcauseâ of complexity (Iâd have to agree) â itâs imperative for IT to standardize security across all devices, protect sensitive corporate data, and meet compliance standards across virtual and cloud environments. I recently wrote a blog post about how mobile device management will be one of the key challenges for IT professionals over the next several years. If youâre interested in reading the post you can find it here: blog.matrix42.com/.../new-employee-classification-and-its-impact-workplace-management