It appears that Desktone is reinventing themselves again, or at least going back to their roots. Just about a year ago, Brian wrote an article about how they'd re-tooled and are now going to sell DaaS solutions direct to businesses instead of trying to sell to huge service providers. That's changing again, with a focus shift back towards the service providers. I had a call with Peter McKay today, who you may remember was a guest on Brian & Gabe Live a few months ago. In the call, Peter outlined the new Desktone 5.0 platform that they announced today and will be releasing soon.

Desktone 5.0 represents a shift in their philosophy of providing DaaS solutions to corporate customers. In fact, while that's how we've tended to look at Desktone for the past 12 months, the bulk of their recent business has come from providing OEM solutions to companies like Dell, NaviSite, and Netelligent (which is NOT the same Netelligent as the brand of EISA FDDI NICs found in your Compaq servers circa 1997!). Even tuCloud recently hopped on board with Desktone after originally building their business on the based on VDI in a Box.

So, with version 5.0, Desktone has decided once again to focus solely on the OEM market, providing a complete desktop hosting solution for DaaS providers that they can build upon with other managed services. The core technology behind Desktone still revolves around delivering desktops via VDI, RDSH, or personal Windows Servers (for smaller businesses to get around the multi-tenancy restrictions) on various backend and licensing models that support many combinations of server hardware, storage, and operating systems: 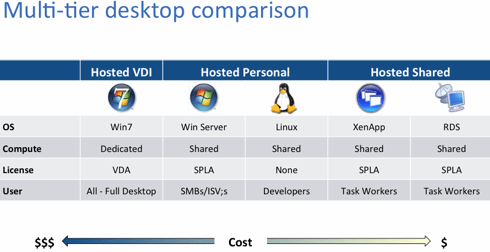 In addition to that, they've also tried to make it easier for their OEM partners to incorporate the Desktone platform and sell it to users. They do this with their DaaS Automation Engine that, among other things, automatically provisions and sizes tenant environments. It also enables service providers to deliver free trial environments, which has been complex to this point. Another interesting thing to note is that they can now support tenants across multiple data centers, so if you're connecting from around the world, it is possible for the service providers to deploy systems that are all managed centrally, while still providing access to desktops with the fewest possible hops. All this is done with the service providers preferred hardware and architectures.

My initial thought on this is that it's a good move, although I'm left trying to figure out how this is different from the last time they re-tooled. Desktone clearly does DaaS well, and they've been solely focused on developing and delivering their DaaS solution for over five years. It stands to reason that service providers would be interested in OEMing a solution from them rather than trying to build on in-house that supports all the use cases and requirements of the Desktone solution. To develop as flexible a solution as they have from the ground up would take forever and be very costly, so in my mind Desktone is doing the right thing by making the technology available to service providers and taking a cut of the action.

Regarding their current enterprise customers, Desktone will continue to support them on the previous platform, but they won't receive any of the features of 5.0 and subsequent releases. Desktone does use their DaaS systems to test out certain features before implementing them on the released 5.0 product, though. To be clear, they're not testing on unwitting clients, they're just using their in-house architecture to vet new features before turning them loose. Existing customers remain on the 4.x product. Of course, there are now plenty of other service providers using the Desktone platform, so they could switch providers and still get the same functionality as they had, plus the new features.

While the platform has only been announced, general availability is expected to be soon (perhaps as early as next week). Dell already announced their offerings, and they've been the topic of some conversation lately. Surely there will be more to talk about at Synergy next week, so stay tuned for our Synergy coverage that starts next Wednesday.