In a recent article over at Virtually Speaking, Ken Hess (who I have no particular beef with, and no desire to start a blog war with) described desktop virtualization by saying "Desktop virtualization means that you run a virtual machine on your desktop computer." I believe that, while there is an element of truth to that statement, it leaves out a large part of what we have been calling "desktop virtualization" for the past few years.

To me, and I believe to the majority of the community, desktop virtualization is the broad term that encompasses almost of all of what we cover on a daily basis. Yes, running a virtual machine on your desktop computer counts, but so does a Remote Desktop Services session or a VDI session, along with all of the technologies that enable or extend them. All of these are types of desktop virtualization, and in no way do I think the terms are mutually exclusive of each other as the article suggests. 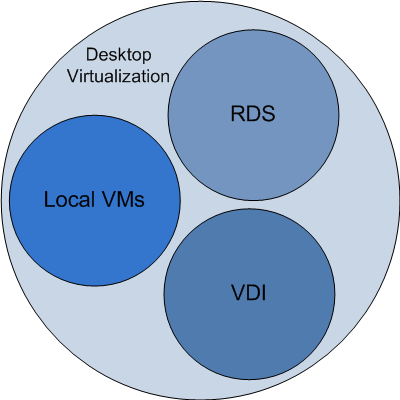 It seems odd to me that there's still confusion on the terminology after all of these years. A search for "What is desktop virtualization" turns up many sites trying to get a grip on the concept. Most of them are just wordy definitions trying to cover all the bases but not really saying anything in the process. The best one-line definition I could find comes from Network World, and it defines desktop virtualization as: "The use of software to abstract the operating system, applications and associated data from the user's PC." It's perfect because it defines the perimeter of our not-so-Venn diagram above, which encompasses even more than the image depicts. By that definition, application virtualization solutions, user environment management solutions, and layering solutions all count as part of desktop virtualization because the desktop is now an abstract concept no longer relegated to a specific instance of an operating system.

If I would've read Ken's article eight or nine years ago, I would've absolutely agreed with it, because the desktop had yet to evolve into what it has become today. At that time, it was all about delivering desktops to the users, and VDI wasn't even an option. Desktop virtualization was just VMware Workstation to most of us. In the years between then and now, the virtualization technology and the application and desktop delivery technology blended together, and that is what today's desktop virtualization is all about.

don't forget that Application Virtualization is also part of this Desktop Virtualization motion... in a virtual desktop of any shape or directly in a physical desktop to create the virtual sensation...

I say the word 'Desktop' needs attention, its not really applicable anymore.

Thanks for reading and stay tuned for more fodder. ;-)

perhaps he is Trolling...