A few weeks ago (last week maybe? They all run together…), Jeroen van de Kamp posted about a Login Consultants solution they've called BYOApp. BYOApp is a solution that allows for automatic sequencing of applications as a sort of User Installed Applications solution. The benefit of BYOApp is that the applications run in an isolated environment rather than being physically installed on a device.

That got me thinking about VMware's ThinApp Factory, which they announced at VMworld earlier this month. ThinApp Factory is basically a virtual appliance that, when pointed to a software installer or repository full of installers, will automatically package the apps and integrate them into VMware Horizon (don't call it an App Store, unless you want to accurately describe it). ThinApp Factory keeps track of the applications in a centralized location, which makes updating, patching, provisioning (and de-provisioning), and customizing them a lot easier than if they were installed here and there around the organization. (Check out Sven Huisman's VMware ThinApp Factory, Technical Preview for a good writeup with screenshots)

Currently, the "user" of ThinApp Factory is the admin, but it seems to me that with a few tweaks to the workflow, ThinApp Factory could be used to enable Bring Your Own Applications (I didn't want to use the name BYOApp, since that's Login's name. I'll use BYOA to refer to the trend now). We've all seen the intricacies of User Installed Apps, and how even the best implementations aren't perfect. Most of them require a virtual environment and complex layering, and while we should continue reaching for the stars, the fact remains that not THAT many organizations want to let their people bring all their own stuff in, even if they leave management of those apps up to the user.

BYOA could allow users to bring their apps to IT in an automated, centrally controlled way (although I picture a line of users outside the IT manager's office, each holding a software package that they want to add to the company). 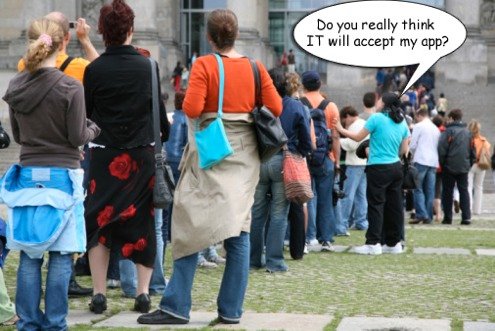 If a user has an application that they need to do their job, but isn't corporate-owned, something like ThinApp Factory could really come in handy. It could package and catalog the app, making sure only that user had access to it. It could maintain, tweak, and provision the app. Through Horizon and Horizon Mobile, it cold even deliver the application to any device the user needed to access it from. All the user would have to do is bring the app to IT.

Sure, that could mean 20 different Goldmine packages (is that still around?) if there were many users in the organization that used it, but IT doesn't have to own or maintain those licenses if it makes each package specific to a specific user.  It adds some complexity to the backend, but perhaps not as much as a full-on User Installed Apps solution would. Even so, the tradeoff could net more manageability, so it might be worthwhile there, too.

With Login's BYOApp supporting App-V, and some tweaks to ThinApp Factory that put the power in the users' hands, maybe we're on to a trend here. Perhaps UIA isn't the answer, as long as we can still manage the applications (and offer the ability to deliver them ANYWHERE). If BYOC can work…maybe BYOA can, too.

So another vendor jumped on the train :-)  - what I can see is that vendors now understand the pain of large enterprsies, that highly standardized their environment and now have problems to manage all off their applications. And I think it is not BYOA or BYOD or BYOC or whatever BYO, but the approach of defining a rock solid IT playground or corebuild and give them the users some freedom back to keep up with the speed of current developments. Look at the stock market - silver lost in 2 days round about 25% of value. If companys cannot keep the speed how things are changing around them they will not exist that much longer.

The need for the support of User Installed Apps (or BYOA) is a logical result of the consumerization trend and we expect this to be a Must Have requirement for all IT projects for the near future.

We started to implement projects with the support of User Installed Apps in 2009 (www.brianmadden.com/.../briforum-2009-demo-lab-scense.aspx). In thoses days, use cases were limited to large organizations with large research departments needing new applications on a daily basis. These departments were not able to package, virtualize or sequence every application requested and certainly didnt have the manpower to test all these packages and projects. The option to grant admin privileges to end users to install their own applications was considered but rejected. Scense allows them enable end users to install their own applications but within control of the IT department. IT know exactly who is installing what and is able to intervene (or help).

With the increasing amount of VDI implementation with non persistent desktops, the amount of request for this type of functionality is growing rapidly.

Good to know that two more players entered this field (it will help mature the market) but please don't underestimate the challenges related to this type of use case. Supporting UIA is hard because of two reasons: the user and the available technoloy today.

End Users will not select appliations on the type of package used, the packaging capabilities of the vendor or the quality of the package itself. End users select on functionality, download the software and install it (and expect it to run instantly on any machine). You cannot expect an end user to be an expert on application virtualization or packaging best practices. Software to support UIA needs to take this into account.

The next thing that needs to be solved in this market is the support of .exe installers while maintaining successrates of 100%.

Congrats on the tool, Matthias. :)

I think there is a definite opportunity for a redefined application management toolset in the enterprise.

And these three automation tools 'play nice with others', which is quite important for a lot of customers who might not be ready or willing to move their desktops into a Unidesk or Ringcube style of layering soup.

Unidesk and Ringcube change the desktop management more dramatically for IT staff than these modern application management tools.

New tools in the toolbox are always welcome in a consultant's life. :)

I want to be clear that ThinApp Factory doesn't do anything like BYOA today, and that I was just speculating about its usefulness if it was to be able to do that. Right now, it's an admin-only tool to get apps ThinApped and integrated into Horizon.

While I think that the consumerization trend is largely driven by the app-centric nature of how people interact with technology and the increasingly blurred line between "personal" and "work" devices and technologies, I can see this becoming cumbersome for IT.  While theoretically IT wouldn't have to worry as much about the license ownership/management I think there'd be more management of applications on the administrative and workflow side of the house.  Your application onboarding process would potentially be overwhelmed the day you implemented this.  Now you'd have to verify that the user's app is appropriate, approved, conforms to security and regulatory requirements, just like you would any other app, but the application onboarding funnel just got a lot wider.  From a technical and functional perspective, I love the idea and concept - I just wonder how difficult it might be to actually implement on a large scale.

Instead of trying to place User application on Corporate Device, try the opposite... Install Corporate apps on User device. Well known and mastered technologies...

If user have to install applications all day long, this is testing and there is a lot of solution to acheive this goal, from Type II client hypervisor to Lab Management.

This ideology would never work.  Why would corporations take on liability of applications from userss?  Hmm..no thanks.