This week at the Summit 2015, Citrix announced a prototype of a mouse. (Yeah, that kind of mouse!) There's not much info on it yet, but here's what I learned from people who attended Summit this week.

Called the "X1 Mouse," this thing is a Bluetooth mouse you can use with your iPad so you can have a real mouse with your remote Citrix desktops and applications. This is a big deal because Apple doesn't support using a mouse with an iPad. So the Citrix X1 mouse talks to the Citrix Receiver iOS app and sends your mouse movements up to the remote session. 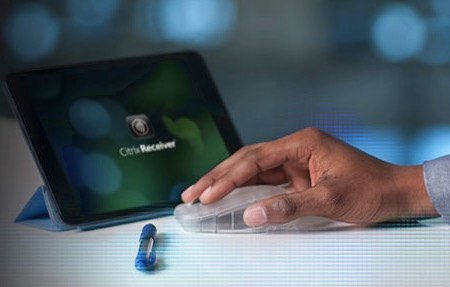 The current user experience for remote Windows desktops and apps from an iPad is pretty clunky, because you have to give up valuable real estate from your 10-inch screen to use a virtual keyboard and/or virtual track pad. Even if you configure the Citrix client to use your finger as a pointer, it's still tough because your finger tip is much bigger than a mouse pointer, and it's really hard to hit the tiny buttons on the screen.

Even if you configure your iPad to work with an external keyboard (which Apple supports and works fine), you still have to touch your iPad with your fingers for mouse movements. There's another option to use your iPhone as a trackpad (with your iPad as the display), but that's also really clunky as your phone slides around the desk and then it's awkward to answer calls.

So anyway, using a mouse with an iPad is kind of a Holy Grail scenario for Citrix Receiver. (Funny that Apple could solve this in two minutes if they wanted to, but alas...)

By the way none of this is an issue if you use an Android tablet since Android supports Bluetooth mice, but the problem there is that whole "Android tablet" thing. (How many white collar non-IT professionals use Android tablets for anything other than reading? Exactly.)

Previously you had to use an on screen track pad, but that's clunky

It would be really cool if this mouse had some smarts in it to be used as a two-factor authentication token. No word on that though.

Congrats to Citrix for creating something that I immediately said "Wow!" to. I imagine this will be tremendously popular. Hopefully they can get the cost down enough that they could throw this into their platinum software bundles. (Or at least cheap enough that we can all get one as a Synergy attendee giveaway this month.)

I can't even begin to tell you how useful this would be. So I'll try....

For this I would give:

@Brian: Yes it is awesome ! Thanks , I will get you one to try for yourself.

@Josh: ping me and I will get you one to save your leg..

For others that are dying to have it, We are having a Giveaway, post your use case at http://citrix.com/mouse

This is what Dock2office launched last year on Kickstarter. We always knew this what VDI on tablets needed.

@chris, we also love to experiment.

This sounds incredibly cool. Hope I can try it.

One question (other than can I please have one?)

IOS 8 at least lets you pair a Bluetooth mouse. It would then be up to an app to utilize it. Is there a reason this has to be a Citrix specific mouse? Just curious.

You can't just pair a bluetooth mouse on iOS 8. Citrix mouse is probably using Smart Bluetooth protocol to communicate with Citrix Receiver. This will probaby be stay proprietary. If you want to use a mouse on other applications, like RDP or Vmware Horizon, there is another solution.

Can't help but think that an iOS or Android app which allows you to use your phone as a Bluetooth touchpad mouse would avoid the need to carry yet more hardware around with you.

This could be restricted as a Citrix only device using XenMobile policies, maintaining the differentiation?

Surely this us possible?

It's amazing that this is even news, but it is indeed cool that we are now allowed to interact with our Windows desktops on an iPad using tried-and-tested 1960's era technology.  And I can attest to the fact that it does work (although you can't adjust the sensitivity yet).

Hopefully Apple will come to their senses and open support for pointing devices within the OS, so we don't have to carry around a special propriety mouse around.

I think you're missing the point.  This is opening things up so people can now use their iPad (or iPhone) as their primary desktop access device.  For short periods of time using your phone for cursor input would be ok, but nobody would want to do that for a long stretch of time.

2015 will be the year we get to use smartphones as thin-clients.  The thing we've all been dreaming about is nearly upon us...

We got to play with the X1 Prototype Mouse and I got to tell you Brian, it is pretty awesome! Check out a video of us playing with it here:

I completely agree on your opinion. Our solution is not focussed on real desktop workers. But at a large group of people who like to use there Ipad for a short period as desktop. Best example are students who now need to have an Ipad for school, but also need to buy Chromebook or Netbook to do some "desktop work". Same is situation in Healthcare.

I think X1 mouse is also not focussed on real desktop workers.

In response to you Smartphone as thin-client. We are actually working on an extended Sphinx docking station with Iphone dock and HDMI connector. So you can actually use your Iphone as Thin Client.

HDMI worked great, though Airplay not so much.  Just receive a black screen on external display.

Surprised no-one grabbed my bait about a phone app which pretends to be a mouse...I was interested to see if many knew about the existing capability of Receiver to act as a track-pad mouse and whether anyone actually used this?

I have been playing around with the new X1 mouse and in the context of use with an iPad it's pretty compelling, and very usable.

I have also heard many commentators suggest that 'the phone in your pocket is now your thin client device'. This use case, for now, I would argue with, for the following reasons:-

1/ What will your display device be?  If you are lucky to have Apple TV or some magical Airplay device attached to every 'hot desk' monitor, then I can agree that using an iPhone as your thin client might be very usable.  If however, you are relying on an HDMI or VGA adapter, then my testing suggests that this is less than feasible, the number of times you need to 'touch' the phone display before your apps are launched means that the HDMI adapter just gets in the way. On two occasions, the weight of the cable pulled my phone off of the table. The lightning cable is at the wrong end of the device for this to be easily fixed (I can see a Citrix iPhone docking device on the horizon!).

2/ Keyboard?  I had several pairing issues with my usually well behaved Bluetooth keyboard which meant that once I launched Receiver the keyboard did not register in my desktop VM.  Repeating the pairing process for mouse and keyboard fixed the issue, but this is something that many less tech savvy users will live with.

3/ Phone capabilities?  My iPhone 6 works pretty well as a thin client and desktop performance is adequate, but for what is probably one of the more capable iPhones, I wouldn't want to use this all day every day.

So, iPhone Thin Client....demo gold, but hardly a practical use case.

Display device?  Airplay isn't really a realistic use-case.  iPhone 6 docks are $4 on Amazon.  Plug your Lightning HDMI Adapter into the back of that.

As far as the keyboard goes, you are right - I have experienced connectivity drop-outs as well, reliability of this would need to improve before Joe Public would be willing to take this on.

I wouldn't have a problem using this on a day to day basis as long as the output resolution and responsiveness improves, But for what it is, in pre-release form, it's pretty impressive, and will be interesting to see if there is actual interest in the market beyond the wow factor.

I don't know for sure, but probably the X1 mouse is using Smart Bluetooth protocol. This protocol is used within iOS to communicate with external sensors, like hartbeat, cycle etc.. Using this protocol has some limitations in speed, which probably has some influence on overall performance.

Is is also interesting to know what happens when there are multiple X1 mouse within reach of iOS device.

We use another technique, which is based on the IOT principles. When using 3G is has some latency issues, but within a normal Wifi Internet enviroment it is working very smooth.

The idea about iPhone as a mouse , Citrix has it already working from last 3-4 years , Install receiver on iPhone and iPad Launch Hdx session press pair it will pair with iPhone.

1) You can buy iPad\iPhone  to VGA or iPad to hdmi and you are all set , you can use your display device even VGA monitors

2) Keyboard. You don't need one , if you have one good if not and  if you have X1 mouse  and external display your iPhone or iPad becomes keyboard how about that ? Receiver needs some fixes to support that.

3)phones are going to be improving (becoming more powerful)  this is for future when everybody will have powerful phones..mobile workspaces.

You need to press pair button from in session menu after launching HDX session and iPad will pair with another iPad or iPhone that has receiver.

The trackpad mouse comment was a but of a throwaway...I have talked to many people since the announcement of the Citrix mouse who didn't even know it was an option :-)

I have an HDMI adapter already and my comment was that this is unusable (IMHO) because of the weight and inflexibility when attached, not to mention that it connects at the wrong end of the phone (you still need to use he phone touch screen many times during use).

A good docking station for the phone would fix this (as mentioned above), but right now these are more about simple charging. I would love to see monitor manufacturers recognise a niche here and build in a capability to dock an android , iOS or Windows phone directly to the screen, but with no standard power/eternal connectivity across devices this is a big ask. I think a better solution would be to develop an industry standard wireless/blue tooth connection protocol which is built into every monitor to allow mirroring.  I can see this being adopted by many phone/screen manufacturers, but hell will freeze over before Apple do anything which is not proprietary!!

You don't NEED a keyboard, but I cant see this working as a serious thin client option without one.

I absolutely agree that the exponential increase in phone capabilities will make this a more and more capable solution,  I used my IPhone 6 to deliver a Windows 7 and 8 desktop for a few hours and it was more than usable.