A few weeks ago, Browsium launched a new product called Proton. Proton works kind of like desktop management software, except the target is browsers and web apps instead of Windows desktops and Windows apps. (So think of software inventory, but instead of inventorying Windows apps, you inventory web apps that users use, including all the necessary Java versions and add-ins and plugins they need.)

You may remember Browsium as the company who does enterprise browser management and web app compatibility remediation. In other words, when you need to configure different plugins and versions of Java and browsers on a “per URL” basis, you call Browsium. (We did a podcast with them early this year, and we’ve written about their Ion and Catalyst products in the past.)

With the success of Ion and Catalyst, one of the complaints Browsium’s larger customers had was they didn’t have any way to really know what was happening inside their users’ browsers. What web apps were they using? What versions of Java did those apps need? What other dependencies are there?

That’s where Proton comes in.

Web apps are kind of a pain in the ass

Back in the day, everything was a Windows app. While we had to deal with upgrades and compatibility and everything, it was pretty cut and dry to figure out what an app needed and which computers had which apps installed. (Did a user run acrobat.exe? What version was it? Done.)

But with web apps, the “app” that users run (at least according to tradition desktop management software) was iexplorer.exe or firefox.exe. That doesn’t really tell us much. The other problem is that web apps are “installed” simply by a user accessing a URL. This isn’t something IT has to setup ahead of time, rather, the user just opens their browser or clicks on a link. A typical users could “use” 40 or 50 web apps in a single day, and IT doesn’t really know what they’re doing, what’s important, and what apps need what resources.

All of the recent trends and pushes towards web apps are just making things worse. So now we have the shift going from “easy to understand” Windows apps to web apps with “features” like run time compilation, “apps” that are containerized within a container, a mix of security, system, and browser combinations (each with their own security contexts). It’s unstructured madness! (And again, we’re talking about literally hundreds of web apps for a typical enterprise.)

At the end of the day, IT has no clue what’s going on.

So what does IT traditionally try to do? Collect a list of URLs? Survey their users? How do they know which apps require which dependencies and which browsers? How do they know what will break when they push out a new browser or change Group Policy security settings for a browser or an internet zone? Do they have the ability to ensure that critical apps will even work?

So this is where Browsium Proton comes in. At its core, Proton is three components:

Browsium has a test drive setup at www.browsium.com/proton/testdrive where you can log in to a live system to see it all in action.

Here’s the web console when you log in. You can mouse over any of the widgets for details: 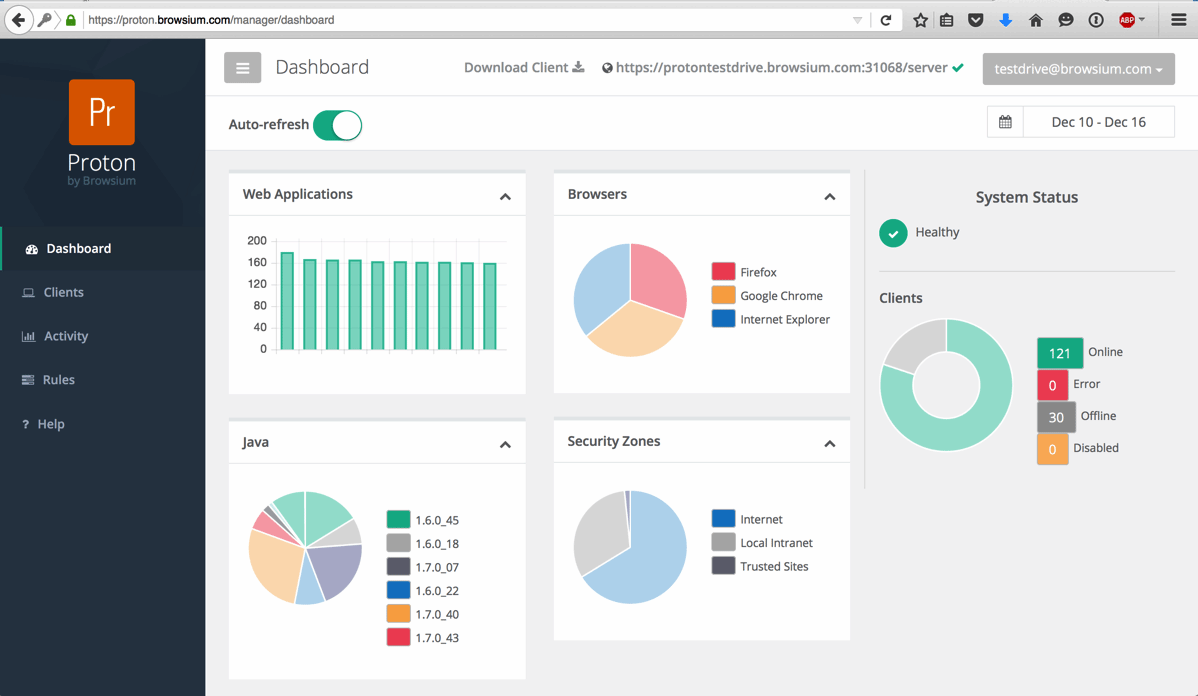 You can click the “clients” section to see data about the clients and what versions of Java and ActiveX controls users have installed. 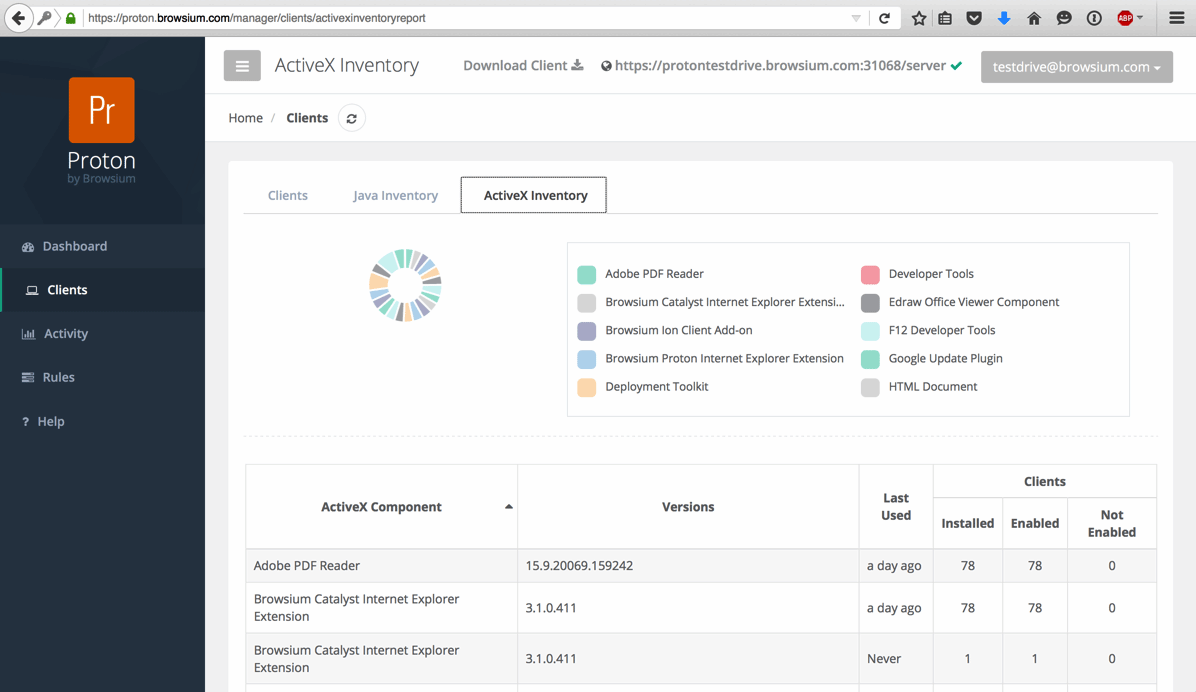 You can see the websites users access, what browsers they use, how many people access them, and what components each site needs. 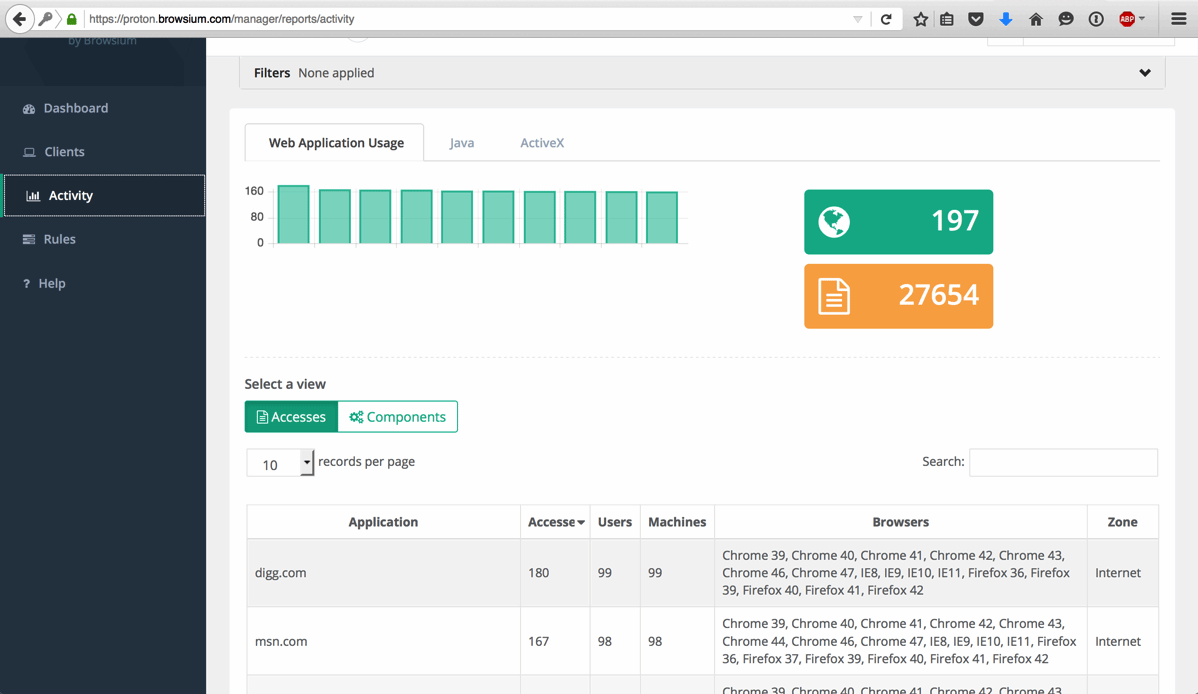 All of this is in a regular SQL server, so you can connect to it to go nuts with whatever kind of deep analysis you want.

The best part about this is the normal human-style pricing. Proton retails for $15 per user. Perpetual. (That even gives you access to the management console hosted by Browsium for life.) If you want to use Browsium’s hosted server & SQL instance, that’s extra, but like I said, you can run that on prem if you like and not have to pay extra for it.

The whole thing can be up and running in a few minutes.

At this point, Proton is a standalone product from Ion and Catalyst, though they’re working towards integrating them all together. (Think “using Proton to create your rules for Ion”, etc.) But even as it is now, Proton fills a big gap in the enterprise end user computing space.