Note: This article was originally published on October 25, 2012. We're reposting it today since Browsium Catalyst was just released.

Yesterday, Browsium released a beta version of their new Catalyst product that will help organizations deal with the increasing number of desktops that have multiple browsers installed. The problem goes back eons, when Netscape and Internet Explorer competed for the browser du jour, but that was mainly IT people that could navigate (ahem!) around the two. Of course, IE eventually won out and enjoyed a period of exclusivity, but of late both FireFox and Chrome have begun to creep on to the desktop of regular users. Since this happens outside the governance of IT, users are left to fend for themselves when deciding which browser to use, and often run into problems where certain sites or home-grown web apps don't work in certain browsers. 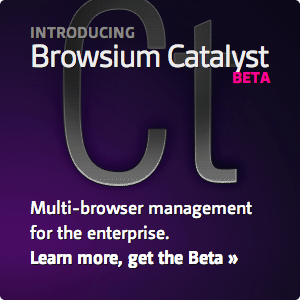 Catalyst aims to solve that with a policy-based solution that directs users, automatically, to the appropriate browser for each site. It does this by becoming the default browser for a system, watching URLs and comparing them to a list of policies that are configured by administrators. In this way, IT departments can, for instance, force a user to access a certain ActiveX-dependent application via IE despite the user trying to use Chrome. There's no fancy virtualization or wrapping going on, though. Catalyst just intercepts the request for a specific URL and opens in the appropriate browser right in front of the user.

The fact that Catalyst replaces the default browser means that you also have some additional functionality. First, you can specify the default browser so that anything used in an app-specific browser is sent to whatever browser the user wants. Of course the opposite is true, too, and you can limit the use of the user-installed browser to select sites or zones. The zones functionality is also important because it gives you the ability to, for instance, only allow IE to access the intranet zone.

Another interesting use case is as a method to combat zero-day exploits. For example, when an exploit is known, you can disable the specific browser across the board (which is possible because Catalyst is the default browser and is configured by policy), or, in the case of IE, restrict it to only the intranet zone. Catalyst is configured via flat XML file or by Group Policy, so making that change globally is fairly simple, assuming you've got a good AD (and if you don't, you should talk to Carl Webster!).

The beta is available now, and it's free to all who fill out a web form. The final version will be a paid-version, and while I don't know the pricing, I expect it to be reasonable and not $100/user or anything crazy like that. Check it out and let us know what you think.