In Part 1, I wrote about the Call for Papers process, which starts with opening a survey around the first of the year and ends with scrubbing the list of responses for people that didn’t follow the rules. In Part 2, we’ll talk about how we actually pick the sessions, which is both fun and challenging. It’s like a giant Sudoku puzzle that has to be solved. The hardest part, though, isn’t picking the sessions...it’s not picking some really great sessions.

Thinking about going to BriForum? We'd love to see you there. There are two shows this year, one in London, 19-20 May, and one in Denver July 20-22. You can learn more about the shows and register to attend at BriForum.com.

The real panic for us starts during the deliberations, which I’ve talked about in the past. I wanted to expand on it here because I think it's really interesting. Kevin Goodman actually wrote an article about his experience as a fly on the wall during one visit to San Francisco a few years ago.

The first thing we do when looking at all the sessions is to hide the speaker name and company. This takes away any chance of favoritism, and is the primary reason that we have between 10% and 20% new speakers each year. After hiding the speaker info, I take my pass, making notes on each session in a massive spreadsheet and assigning it a vote of Yes, No, or Maybe. After that, I pass the document to Jack, who does the same thing for the EMM sessions.

When Jack is done, it goes to Brian. It’s at this stage where, in spite of the rules that I’ve sent spelling out exactly what to do and how I want to receive his votes (because I’m the one compiling it all for the next step), Brian goes rogue and comes up with his own system. It happens every year, and it’s always different. Sometimes it’s “I just said Yes and Maybe because putting in No is redundant,” which throws off the formula that we use to sort sessions. Sometimes it’s “I put them all in categories in different tabs so I could pick better,” which just means I have to recombine them all before sorting them. One year he printed them all out, cut them into strips, and taped them to a whiteboard. How am I supposed to sort that? This is why we give it to Brian last. 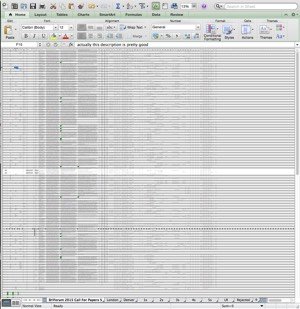 I had to zoom out to 13% to fit all the information we look at!

Most of the ideas Brian has had are good, but better used later down the line after we’ve eliminated the sessions that none of us want to have. Among those eliminated sessions are the ones that are clearly marketing sessions. BriForum is about independent, technical content, so as soon as we see marketing terms like “paradigm” and “workshopping hyperconverged cloud-based mind shifts,” we get turned off. We each have different thresholds and pet peeves about words, but one of us always manages to suss out the shills.

After that’s done, we divide up the sessions by score and un-hide the speaker information. Those sessions that received all “Yesses” are basically accepted, so they make up the initial list of accepted sessions.. We then move on to the sessions that someone said “Yes” to and someone said “No” to, because for us to have such a difference opinion means that someone missed the point. This plays out like a courtroom drama, with each of us making cases for the session, either for or against it. It might be the most fun part of the process because it’s where actual deliberation happens. Sometimes one person gives in, but normally there’s compromises like “If there’s room” or “That’s fine, you can have that one, but I want to have this one…”

When that’s settled, we’ve usually added another ten sessions to our initial list of accepted sessions. At this point we usually have 80 or so sessions to pick from (we only have 83 session spots total), but among the sessions we’ve selected there are usually some gaps in topics. Perhaps we want more storage, application, entry-level, or EMM sessions. To fill in the gaps, we turn to the sessions that scored a 2 (ones where one person said Yes and another said Maybe).

When it’s all said and done, we usually have 100 sessions to pick from, and that’s when things get hard.

First, we divide the sessions up by the cities they were submitted for. This year, speakers could choose London, Denver, or Both. Almost everyone picked “Both,” which meant that for each show we still had roughly the same 100 sessions to pick from. There were some people that made it easy on us, submitting for either Denver or London, but not many!

At this stage, we have a few sessions placed in each city, but way more sessions available than spots. We have to cut a lot, and sometimes it hurts. We have a budget to keep in mind, so if two speakers are giving similar topics but one is already giving another session, we ask the speaker that’s already there to give two sessions. If the speaker lives in Europe and we’re already having the session in London, then we probably aren’t going to have it in Denver no matter how awesome it is.

The hardest ones, though, are where we just can’t find a way to bring a speaker that we’ve come to know over the years. For instance, we can only have so many sessions about printing or sequencing an application. So even though we got a handful of great printing sessions and a dozen great sequencing sessions, we simply can’t pick all of them. I liken it to having tryouts for a basketball team. 40 people show up and work their butts off, but you can only pick 12 even though everyone worked just as hard. It’s a mentally and emotionally taxing phase of the process for us, but it’s necessary.

Usually this process takes a bit of creativity to help it along. In the past we've printed out all the sessions and moved them around on a table as if we were planning an attack. One year we did it at Brian's house in Washington, DC while sitting at the bar in his basement. That was the longest selection process ever. 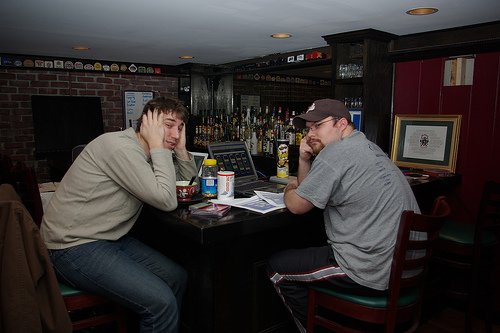 Still, it usually boils down to a number of spreadsheets, conditional formatting, and a comprehensive knowledge of the differences between Excel for Mac, Excel for Windows, and Google Sheets.

Once we make it through the selections, we wind up with a list of sessions for each show: 55 sessions in Denver and 28 in London. There are a few duplicated sessions about hot topics in the industry today, but in general we try not to overlap too many. Since we give access to the session videos from both shows to every attendee, that reduces the need to duplicate sessions.

We’re not done yet! There still the “speaker wrangling” phase, where we coordinate with speakers followed by creating the agenda. But I’ll get into that next week...

Think this is a lot of work? You haven’t seen anything until you see the work that goes into each session! You can learn more about the shows, see the agenda, and register to attend at BriForum.com.