I did some research to either back up the claims of the death of Windows or put them out to pasture, and what I found was not what you would think if you only listened to marketing departments at next-gen software companies. While there is undeniably a movement to migrate apps away from Windows, the reasons for this tend to be more along the lines of not wanting to have to deal with app compatibility issues between OS versions (including apps tied to specific version of IE) as opposed to “Windows...meh.” As time goes by, the number of applications we have on Windows is decreasing, but for every app we get rid of, there’s still many that we retain, and when we have Windows apps, we need Windows.

What got me thinking about this originally is based on a conversation I had with Unidesk’s Ron Oglesby, talking about an unnamed customer that has 400 Windows applications. We sort of joked about how long it would take to migrate all of them to some platform other than Windows, if there even was a more appropriate platform. Even at the breakneck pace of 1 application per month (think of it, this is writing or acquiring an app, configuring, integrating, and training end users, so that pace is ridiculous), it would still take 33 years to migrate all those apps!

So then I thought that if Windows was really on the way down, even if it was spurred from the consumer side, there should be a noticeable decrease in Windows usage worldwide, right? I checked NetMarketShare.com, which has the distinction of being the first site I found that provided me the data in the format I needed. You may have a better site–I’m just going with what I saw.

According to them, Windows usage has dropped since 2009 (the year Windows 7 was released), but as is often the case, presentation is the key factor in determining how much of an impact this appears to be.

For instance, those that want to show you how Windows is floundering amidst a sea of other services, apps, and OSes might show you this chart: 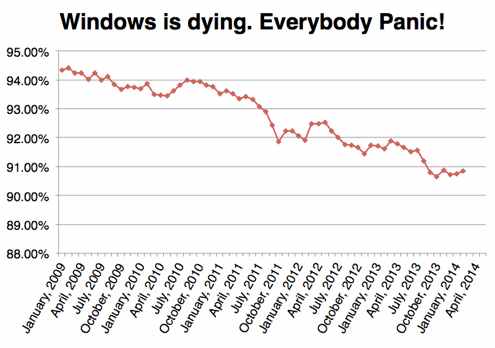 Whereas others trying to provide a more realistic assessment of the situation might show a chart that’s more indicative of the current landscape: 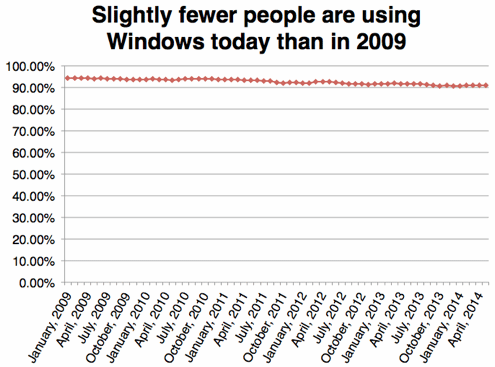 As you can see, Windows usage has declined, though at a rate of <1% per year! If you stretch that out, that’s 127 years of Windows left, which means Windows will outlive you! (33 years is starting to look pretty good)

Of course, all these numbers are completely irrelevant. The only thing of value is the evidence that while Windows usage is on the decline, it’s not the precipitous drop that you might be led to believe. That means that Ron’s customer with 400 apps doesn’t have to be in a rush to migrate away from Windows altogether to keep up with the times, let alone a company with substantially fewer apps.

Still, this doesn’t mean that we have to maintain the status quo. After all, our jobs exist to manage applications and data, despite the fact that we call it “managing Windows”. Managing Windows is a broad term, especially when you consider what all goes along with that. We have to manage access, security, updates, and hardware, all of which makes it that much harder for us to just care about the apps and data.

That helps us create a more clear picture of what the desktop virtualization industry needs to prepare for, and how our businesses need to think. We don’t have to panic and run to some other platform, cloud-based, mobile, or otherwise. We simply have to think about the best way to accomplish the things we need to do, while at the same time cutting loose some of the crap that we don’t want to worry about.

Somewhere along the line you'll reach a tipping point where you have a small enough number of Windows applications that it’s no longer worth managing physical Windows desktops. Maybe you still need the the actual desktop interface, so you’ll do something like VDI or desktop-based DaaS to get yourself out of the PC management game (you probably already do something with desktop virt, but once you reach that point, you'll be inclined to do it everywhere). Eventually, you’ll get to the point where it doesn’t even make sense to manage Windows at all, despite having a number of Windows applications. That’s where these application-based DaaS solutions come into play. That point is a long way off, though, and between now and then it's more of the same: don't just have a VDI or DaaS strategy, have a Windows strategy.

Sure, the Post-PC era is a bogus sentiment that exists only in marketing literature. There’s a lot going on in the world that is not PC-related, and a lot of it falls on our plates, but that only means we have more to do. It’s not like Windows is giving way to something else. We just have to deal with all of it.

The vendors know this, and it’s why we’re seeing a resurgence in application-based desktop virtualization solutions these days. Citrix is talking about applications again like they never lost their focus, VMware is actually focusing on applications after ignoring them for many, many years, and Microsoft released Azure RemoteApp specifically to deliver Windows applications from the cloud. Even new companies like MainFrame2 are getting into the mix. And it’s all because Windows will be around, even if it’s as middleware, for a long, long time.

Excellent read! I agree that Windows isn't necessarily declining but that we now have to deal with more. Not convinced that VDI just comes in at the breaking point, I would say a comprehensive end user computing strategy that includes desktop virtualization is what enterprises should be thinking about!

Well said, Eli! I definitely didn't mean that you shouldn't use any desktop virt until then, just that at some point you'll look around and wonder why you still have all these physical desktops laying around.

I agree with Elias, this was an excellent article.  Good job Gabe.

I suspect if you split total Windows users into enterprise and consumer, you'd actually see a slight increase in the enterprise. I don't see a macro trend any time soon where enterprise customers are using less Windows. Sure new models are emerging and the aggregate percentage of the total may be declining, but the absolute number I don't see any data supporting a decline. The simple litmus test is to just ask customers if they have less Windows in the enterprise than 3 years ago and has their spend decreased?

I wonder how the graph for "new applications, created specifically for Windows" would look. I'm guessing a much more significant decline, even if you include Metro apps ... In the long term, that doesn't bode well for Windows, even in the Enterprise. It will be interesting to see if Azure can can impact this negative trend.

While I'm also a big believer in the "long tail of Windows", I don't buy that 33 year calculation. Applying the same logic, it should have takes that unnamed customer much more than 33 years to role out these applications in the first place! Has this customer been using Windows since the 70s?

I also agree with the overall premise presented here. I don't agree with the "post PC era" hype. But I am focused on eliminating the "Desktop" where it makes sense. Present the user only the apps they need to complete their task. It seems to be working in the mobile space, Now extend this to the enterprise work space.

I think the growth of Windows will be limited but doesn't mean PC is dead.   Just less people that need to update their hardware.

It makes it a tougher case for Microsoft to put out new OS without any new useful features.

Why should any company be forced to upgrade from XP/7 when apps works fine and any security issues can be mitigated by virtualization and other add-ons.

Whilst soothsayers and those with a focus on only developments / growth in the consumer market have predicted the death of the pc and Windows, they fail to realise that the growth being seen isn't really making a dent on Windows in the enterprise. Basically, what has been happening is an enlargement of the market.

Yes, tablets (mainly iOS) have made an inroad into enterprises, however, I haven't (so far) seen them replace pcs. In fact, most users use them as secondary devices. Although things can change rapidly (as we all know in our world i.e. technology), it is not likely to be in the next 15 years.

Does anyone think organisations that have been reluctant to ditch Windows XP (remember there are some still running Windows 2000 - I saw this at a supermarket some months ago in the UK) or Windows Server 2003 have the appetite and the boldness to move away from Windows! Yes, we should move towards an agnostic environment where the platform does not matter, however, it will take more than consumerisation for this utopian future to be attainable.

The key factors that will protect Windows in the enterprise are: fear of making a drastic change; the high risk of making the change; data; applications (this is the most critical factor; enterprise applications are written for Windows platforms. Yes, the cloud, SaaS etc. will help break the entanglement but we are still many years away from that).

raphbaph - 10 Nov 2017 3:24 AM
I think Chrome OS and SaaS pose real alternatives for enterprises. Whether they will have any significant impact on big companies, where security roles and related concerns have a much more profound impact is very hard to say. probably not.