Last Friday I wrote an article about the HP Moonshot (a modern day blade-like system) and why I like it for VDI.

In one of the follow up conversations from that article, Gabe said to me, "Man, did you see that Citrix is doing XenApp bare metal on the Moonshot too?"

While I did notice a XenApp option listed on HP's website when I was researching the article last week, I didn't look into it or think much of it. But today Gabe pointed me to a blog post from Citrix's Tony Sanchez about XenApp on Moonshot, and I've got to say—it's pretty cool.

First, the Moonshot cartridges that they're using are Intel Xeon E3 CPUs with Iris Pro GPUs (rather than the AMD systems on a chip I mentioned last week). Second, when XenApp is used with Moonshot, they're running it on the bare metal—so there's no hypervisor to get in the way of performance or to worry about for compatibility with the GPU and graphics remoting. (That said, I had to laugh when I read Tony's mention of how great it was to have bare metal since you don't have to worry about overcommit and stuff. I mean wasn't that the whole point of virtualization just a few years ago? :)

Tony has all sorts of LoginVSI graphs in the post, but the one that really caught my attention was this: 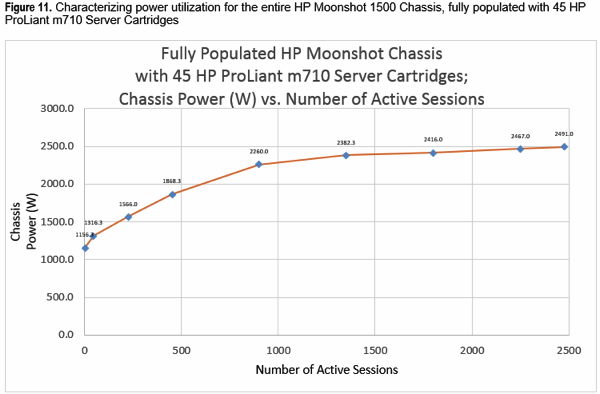 This graph is showing the chassis power consumption (in watts) versus the number of active sessions. If you look closely, you'll see that's pretty darn near 1 watt per user!

This is insane. Did you ever imagine that we'd see the day when we could fit 20,000 medium density users in a single rack with power consumption of only 1 watt per user? (Okay, BriForum attendees who went to Chetan's session should three years ago should have been ready for this. But the rest of this, man, this is crazy.)

So what do you think? Do huge density numbers and low power consumption matter to you? Is this crazily awesome or am I just too far out of it?

It seems getting it to work has some known issues;

I'm not so sure about 20,000 users per rack,  at most your going to be able to get 4-5 Moonshots per rack (realistically). But even then, that's still a lot of users!

so the article Carl wrote was for the m700 carts. (AMD)

This is very exciting tech, I speak from first hand dealings. Density is crazy on this platform. We have had our POC in place for about a month so far, and are now pairing that with AppSense.

The MoonShot interface needs some work before you get into PVS, but that is coming. Once connected to PVS, life is good. I highly recommend Devolution's Remote Desktop tool to manage.

VERY excited about the Xeon carts.

Commodity hardware to do the same thing at lower price points wins in time. Not sure worth the operational overhead. All that density is just a single point of failure and increases risk. Good for commodity use cases, but over time I don't think HP can win here.

Joe, you get 8 Moonshot chassis in one rack with the spacers HP provides to allow for airflow.

Dennis, there is mothing wrong with Moonshot itself. My complaints were with documentation, Citrix support and HP not testing a couple of software pieces for compatibility.

HP just released firmware updates that fixed almost every issue we found in my first two PoCs. The updates also add a web interface so you do not need to use PuTTY and they now update three cartridges at a time instead of one.

I am looking forward to my first XenApp PoC using Moonshot.

Thank you for the tip about Devolutions Remote Desktop Manager, Josh!!!