Out of the box, NFuse Classic 1.7 only has the ability to provide applications to users from a single server farm (because it only communicates with the Citrix XML service from a single server). This is unfortunate since (as we learned in Chapter 3) there are plenty of real world situations in which your MetaFrame XP environment might need to consist of multiple server farms.

Luckily, there is a solution that allows you to use a single NFuse web site to seamlessly and securely access published applications from multiple server farms. This is possible with a Citrix product called "Enterprise Services for NFuse 1.7" (abbreviated as ESN).

ESN is a standalone product from Citrix that sits between an NFuse web server and multiple server farms, as shown in Figure 11.6. When ESN is used, the NFuse web server communicates with ESN, and ESN communicates with the Citrix XML service running on multiple MetaFrame XP servers in multiple server farms. ESN stores all of its configuration in a SQL database. That database can be shared between multiple ESN servers for scalability and redundancy.

Figure 11.6: How ESN fits into the NFuse architecture

The remainder of this section will focus on how ESN works and the design considerations that you need to think about for your environment. In Chapter 17 we'll describe how ESN can be used to load-balance multiple server farms for the ultimate in redundancy and high availability.

How Enterprise Services for NFuse Works

In the beginning of this chapter, we outlined the step-by-step process of how NFuse Classic works. Figure 11.7 (next page) details that same process when ESN is also used. 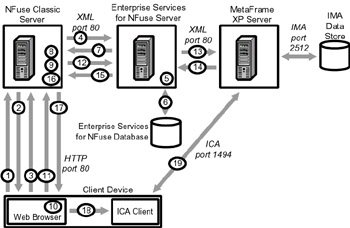 There are five components that make up Enterprise Services for NFuse environments:

In order for this to happen, you need to put your NFuse web server into "Enterprise Mode." This will tell NFuse that it is communicating with an ESN server. You can put an NFuse web server into enterprise mode by viewing the NFuse administrative web pages (NFuse Admin Web Site | Mode Link | Mode Setting) or by adding the following two lines to the NFuse.conf file:

The Enterprise Services for NFuse server is the main ESN component. It uses the Citrix XML service to poll all of the configured server farms (every 24 hours by default) and creates and maintains its own aggregated list of applications that are available across the farm.

Additionally, the ESN server maintains a list of user account mappings for NFuse user accounts that can be used to access MetaFrame XP servers in multiple farms.

The ESN server itself must be running Windows 2000 with Service Pack 2 and Internet Information Services. When you install ESN, a new web server component called "Tomcat Jakarta" is installed. (This is essentially an interpreter for the ESN web code, since that code is written as Java Server Pages which are not natively supported by IIS. More information is available at http://jakarta.apache.org/tomcat/.)

When you install ESN, you must choose whether it validates users against a Windows domain, an Active Directory, or an NDS tree. This is known as the "account authority." If you plan to use Windows NT 4.0 domain or NDS authentication, your ESN server must belong to a Windows domain. If you plan to use Active Directory authentication, your ESN server can operate in workgroup or domain mode.

All of these requirements apply to the ESN server only. Your NFuse Classic web server can be on a non-Microsoft platform.

ESN stores all of its information in a database. In addition to the cached lists of server farm applications and the user account mappings mentioned previously, the ESN database also stores all of the ESN configuration settings and any log files that you enable. (Unlike NFuse Classic, ESN does not store any information is text-based configuration files.)

The exact size of the database will vary depending on the number of farms, applications, user mappings, and log files that you have. However, even the largest ESN databases are not especially large.

In order for a MetaFrame XP server to work with ESN, it must have Feature Release 1 or 2 installed.

ICA clients access the ESN environment in the same way that they access NFuse Classic environments. Similar to when NFuse Classic is used, once a MetaFrame XP ICA session is launched, both the ESN and the NFuse servers are no longer involved. At that point the user has a direct connection to the MetaFrame XP server.

Now that you know how ESN works, you can start to think about the design of your ESN environment. There are several issues to consider:

As long as published applications from multiple server farms have the same display names and application names, and as long as they are in the same Program Neighborhood folder, ESN will aggregate them into a single icon for on the ESN web site. This can be used to load-balance server farms.

You can use the ESN administrative web pages to specify default server farms for groups of users. Then, when users click on icons for applications published in multiple farms, they are sent to their preferred farm unless that farm is not available, in which case they are sent to the next least-busy farm.

The whole point of using ESN is to provide your users with access to multiple server farms. Unfortunately, there are many situations in which your users will not have rights to the MetaFrame XP servers in all the farms, since different servers from different farms are usually in different domains.

Based on your answers to these two questions, there are three possbile mapping modes:

You must make this account mapping decision for every server farm that is part of your ESN environment. Let's take a look at each of the three options.

If your users already have valid accounts on the MetaFrame XP servers in the target farm, you can configure "manual account mapping." This setting causes the ESN web pages to ask the user to enter his account information for each farm the first time that he logs in to ESN. However, this information is then stored in the ESN database and users are not asked for their information again.

If your users do not have valid accounts on the MetaFrame XP servers in the target farm, and if you do not want to manually configure accounts for them, you can configure the farm for "automatic account mapping." To use this, you need to manually create a pool of user accounts in the target farm. (These accounts all need to be configured with the same password.) Then, when a user logs into the ESN web site, ESN automatically picks an unused account from the pool and creates a permanent mapping in the ESN database that locks the two accounts together. This allows users to log into the ESN website with their official account and be able to sign into the target server farm without re-entering their credentials.

Lastly, if the MetaFrame XP servers in the target farm are in the same domain as (or a domain that trusts) the ESN server, you do not need to configure any account mapping (since you users will have authenticated to the ESN server already).

Advantages of No Mapping

Disadvantages of No Mapping

Placing ESN servers in your environment

Now that you've designed all the other aspects of ESN, you need to think about where you're going to put your ESN servers. As you decide this, keep the following points in mind:

Configuring ESN is relatively simple. While there are dozens of potential options (all outlined in the "Enterprise Services for NFuse Guide" that comes with the product), you can configure your ESN environment by following a few basic steps:

At this point, you have completed the "first time only" options.