The last layer of security that we need to look at is the security and configuration of the user accounts themselves. When addressing security from a user perspective, there are three different items that must be addressed:

You can configure several security options at the user layer. The advantage to configuring security at this layer is that the settings follow the user no matter where he logs on. In both Windows NT 4.0 and Windows 2000, there are several user properties that affect the security of your MetaFrame XP environment. These user-layer security configuration options can be broken down into three broad categories:

There are only a few user account properties specific to MetaFrame XP (or any Terminal Services) environments. First, each domain user that will use any MetaFrame XP server must have the "Allow logon to Terminal Services" box checked in their account properties. If you have particular users that you do not want to use any MetaFrame XP servers, you can uncheck this box. Unchecking this box affects the user for both RDP and ICA connections.

Each user's account also has properties similar to those that you can configure at the connection layer. These properties include the timeouts for ending disconnected sessions, active and idle session limits, and whether the user can reconnect to disconnected sessions from any client or only the original client. These settings apply to the user whether they connect via RDP or ICA.

Not immediately obvious is how the "run program on startup" options work within a user's account properties. This option is similar to the initial program option that you can specify at the connection layer because when the user exits from the program, their Terminal Services session is ended. However, be aware that any initial program that you specify in a user's domain account property only affects him when he logs onto Terminal Services with the RDP protocol. MetaFrame XP ICA connections are unaffected.

Each server can have a local policy in place that affects users' local security rights. The way you configure these local user rights depends on the platform on which your MetaFrame XP servers are running. In Windows NT 4.0, user rights are configured via user manager on the target server (user manager | policies menu | user rights). In Windows 2000, local user rights are set via the local security policy of a server (administrative tools | local security settings | security settings | user rights assignments). On both platforms, you can configure local or domain users or groups with various user rights. While many of these user rights are not relevant to the security of MetaFrame XP environments, there are several that are. Some of the security-related rights include a user's ability to shut down the computer, change the system time, manage the auditing and security log, and take ownership of files.

One of these security rights that is particularly useful in MetaFrame XP environments is the "log on locally" right (log on interactively in Windows NT 4.0). In order for a user to be able to use a MetaFrame XP server, he must have the rights to log on locally to the server. In the real world, you might have 10 or 12 servers for 2 or 3 different departments. You can create a global group for each department, called "Dept A Citrix Users." Then, on the MetaFrame XP servers that serve applications to Department A, you can remove the "log on locally" right from "Domain Users" and grant it to "Dept A Citrix Users." Configuring the local security rights of the server gives you an extra level of protection beyond your published application and NTFS security. If you do this, remember also to grant "log on locally rights" to the group that contains the MetaFrame XP administrators.

All of the local security rights from the previous section can be deployed across multiple servers as part of a domain policy (NT 4) or group policy (Windows 2000). They are tied to specific user accounts only when those user accounts are added to the system policy or to an organizational unit where the group policy is applied. For detailed information regarding the use of policies in a MetaFrame XP environment, refer to Chapter 7. In all cases, domain policy or group policy settings will take precedence over the configured local security rights.

One way that many organizations are securing their user environments is by implementing secure user authentication mechanisms. There are two methods that work well in MetaFrame XP environments:

In environments in which positive user identification is important, smart card technology if often used to authenticate users.

This section is not intended to teach you everything there is to know about using smart cards in Windows. That would require an additional 800 pages. The purpose of rather is to provide information about how existing smart card implementations can be extended with MetaFrame XP. For more information about smart card usage in Windows 2000 environments, check out Microsoft article Q313274. This article describes the process to configure a Windows 2000 certificate authority to issue smart card certificates. It also contains links to other Microsoft articles that step through the process of getting a background smart card environment set up.

To secure your MetaFrame XP environments with smart cards, you need to use Feature Release 2. Also, your client devices must use the 32-bit Windows or Java ICA client, version 6.30 or newer.

Windows 2000 and Windows XP are the only Microsoft operating systems that directly support smart cards. However, so long as your MetaFrame XP server is running Windows 2000, you can use smart cards from any 32-bit Windows client, including Windows 9x.

This is possible because the ICA protocol has been extended with Feature Release 2 and version 6.30 clients. A smart card channel has been added that passes smart card information from client devices to the MetaFrame XP server.

Therefore, if your clients are using Windows 9x, a locally attached smart card reader cannot prevent a user from logging on locally to the client desktop. However, they can be prevented from logging on to MetaFrame XP without proper smart card authentication.

If your ICA clients are running Windows 2000 or Windows XP, the smart card software and drivers can be installed locally on them to enforce local logons. In this situation, the smart card reader would be used for local logon and remote MetaFrame XP logon.

Before you begin using smartcards in your MetaFrame XP environment, you should have them working in your existing environment. This means that you should have individual cards with user's certificates and PINs on them. Your backend directory (such as AD) should be ready to go. Your certificate authorities and digital certificates should be all set up. Once all this is in place, smart card usage with MetaFrame XP is very straightforward.

Project Willamette only has a few requirements:

The Burning Troll Lumber Company has two Windows 2000 domains, EAST and WEST. Each domain has a domain local group (DLG) for users: EAST-USERS and WEST-USERS. By definition, a DLG cannot contain members of other domains. (Hence the "L" in "DLG.") 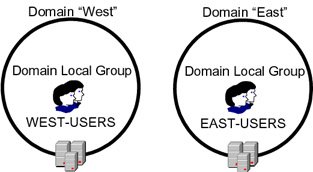 As you may have figured out, this configuration will cause a problem. Consider how load-balanced published applications work. A user requests the application-LumberTracker in this case. The MetaFrame XP back-end determines which server is least busy and returns that server address to the user. For the Burning Troll Lumber Company, this could cause a technical short-circuit. What if a user from the west is given the address for a server in the east? Because the WEST-USERS group is a domain local group, the east servers do not recognize it. The server would not allow the user to start a session.

The Burning Troll Lumber Scenario could never happen in the real world. There are two ways that MetaFrame XP automatically addresses this situation to prevent it from occurring:

Even though you cannot configure applications to be published to users that don't have rights on all the servers where the application is published, it's still possible that a user could do something that would require him to be authenticated by a server where he doesn't have rights. If this happens, the user's authentication is transparently passed on to another farm server where the user does have access. This is known as "trust-based routing." It's possible because MetaFrame XP keeps track of Windows domain trust relationships via the IMA data store. The domains and associated trust relationships of all farm servers are updated during a trust query cycle. A trust query cycle occurs when the IMA service starts and every six hours thereafter.

Trust based routing can occur in the following situations:

How to Mitigate Domain Trust Issues

If you decide that trust intersections and trust based routing is too risky or confusing, you can follow these guidelines to avoid having MetaFrame XP invoke its trust voodoo. Think of these as the three golden rules of server farm design if you don't want to troubleshoot weird trust problems:

To summarize, you should really make sure that all of your farm administrators have administrative rights on all your MetaFrame XP servers and that all of your users have rights on any servers that they would ever access. Remember that MetaFrame XP server farms operate totally independently of domain boundaries, so using some sense when you design your farms will save you from headaches down the road. The simplest way to avoid all this is to not create server farms that include servers from multiple non-trusted domains.